*We were contacted by multiple parties prior to the end of the school year with concerns about campus security at CHISD. We’ve spent several weeks speaking with those parties, vetting the information provided and allowing time for the District to respond.

Only, not in a good way.

Numerous posts containing photos and videos of fights in the CHISD, along with complaints of disturbing activity involving strangers, are making the rounds and it has folks concerned about the safety of students.

Several people came forward with their concerns to Focus Daily News, though all but one chose to remain anonymous because they have some connection with the school district through their children or otherwise.

The one person who would go on the record is DeAundra Hurd, a community activist. In full disclosure, she recently lost a school board election, but said the problems in the district are why she ran to begin with.

“That was the primary part of my campaign. I was running for change,” Hurd said. “I feel like my opponent is working for that also.”

Attempts to reach her opponent, Carma Morgan, were unsuccessful.

“I have been in Cedar Hill since 1996. I’ve had five children graduate from CHISD, and each year it seemed to get worse,” one anonymous complainant said. “Most would like to blame this on our district being open and allowing others to be a part and not live in the area.”

That same complainant blamed much of the problem on a lack of enough security in the district. They added that, though they have not directly contacted the police, they have voiced concerns about getting more patrols in the area to help curb the fighting. They also were one among several to complain about who they believed to be unauthorized people coming onto campus.

“The school didn’t tell us that there was a guy on campus last week during the fight that didn’t go to school there. He actually got away, too,” they said.

They added that this wasn’t the first time they were familiar with the situation of a stranger arriving on campus.

“When my daughter was there in 2018, there was a random man who no one knew in the school. He threw money up and was able to walk out. No one caught him either.”

Strangers breaking school boundaries seems to be a regular complaint. 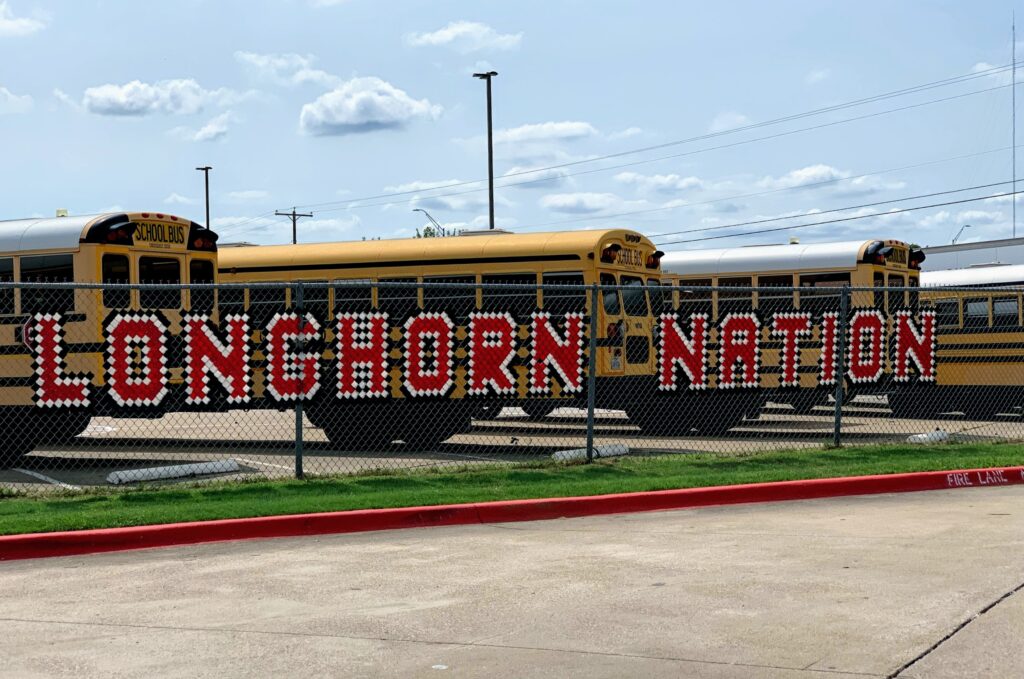 “I heard it was a strange grown man on campus today, and when security was called they couldn’t find him. I’ll find out more info.”

—”At all. The lunch lady told me he didn’t have a shirt on and walked into the lunch room and then disappeared.”

—”Oh my Lord! I thought you meant he was on campus grounds. He was able to walk inside the school?”

—”Yes! OMG, and up to 30 teachers called in today, so the library is full of kids because there is no subs. This is too much for a Monday!”

Video has also surfaced of a fight in the hallway of the high school while several students stood by and watched.

“It’s sad when your children don’t want to go to school. Most of them refer to it as Cedar Hood, not Cedar Hill. So many parents consider this district to be a war zone, but they can’t send their children to any other school due to finances,” another post stated. “Cedar Hill has a lot of skeletons and is trying to keep them in the closets. I am with all the other people who want to expose them and get our children a safe place to learn and live.”

Hurd, a 2008 Cedar Hill graduate, said she met with Superintendent Dr. Gerald Hudson and
they discussed the problems in the district, particularly at the high school. She secretly recorded the conversation, in which Hudson can be heard making some controversial comments, including that too much focus is placed on high school students and “High school students are a waste of my time.”

In a response to a question about his comments, Hudson issued this statement:

“Cedar Hill Independent School District is taking significant steps to address an issue that is affecting multiple districts across the country – an increase in altercations on campus. We recognize that while these issues are societal, it’s up to us when these issues arise in our community. Working together is the only way to pave a successful path forward. Recording small snippets of conversations out of context, without consent, does nothing to advance our shared goals of reducing altercations.”

Texas is a one party consent state. This means that just one party involved in the conversation needs to be aware that it is being recorded. If you’re the one recording the conversation, for example, you do not have to reveal this to the other party.

Hurd is also a caregiver to her autistic brother who attended the special education department in the CHISD before graduating recently. She said she dropped him off each morning at 8 and picked him up each afternoon at 12:45, during which times she said she would regularly see numerous students leave campus through the side gate that separates the school from the park, or even jump the fence.

Hurd, likewise, credited this largely to a lack of security.

“As the buses are departing, there is only one security guard in the back, and he can only do so much, seeing as though he is directing traffic while telling the kids to come back. I have watched countless students disrespect him, as they casually walked off campus, and it is very disheartening,” she said.

“I have called the school, and CHISD Police Department countless times. I have reported the many drug transactions I have observed take place at the park, the fights at the park, the inappropriate behavior at the park… all in broad open daylight, while smaller children were present. And nothing has been done,” she added.

Hurd continued to say that during a play date with her child and some other children at Virginia Weaver she spotted several students on the playground smoking marijuana near the children. In an effort to get the situation resolved, she said she was met with confusion in the response from the district.

“I called over to the high school to see if one of the officers would come next door. The CHISD Police SUV pulled up, and another parent flagged him down so that we could point out where the kids were hiding,” Hurd said. “His exact words were, ‘That’s not my job, call the city’ and he drove off.

“So that’s what I did. An officer came out, rounded up two of the kids since they ran, and talked to them. He radioed for a CHISD officer from the high school to come, and the same officer/SUV came because he was responsible for them, seeing as though it was during school hours. There have been many times where I have called next door, and waited two-plus hours, but no one ever showed. Just more kids.”

The CHISD responded to a series of questions from FDN concerning the complaints and postings:

“District leaders are not happy with the number of incidents we have experienced this school year, particularly the spring semester. The secondary education team, along with members of the CHISD police department are evaluating safety procedures and implementing systems that help our campuses operate more effectively and mitigate fights. Social Emotional Learning (SEL) is another way that the district is working to alleviate these situations.”

FDN: Is the school district working with the school board in any way to address the many complaints?

FDN: Has this been an issue before in Cedar Hill and how was it addressed then?

CHISD: “Unfortunately, conflict is commonplace in schools and in our community. We have developed a CHISD School Safety Committee that helps address some of the trends and concerns concerning safety in our schools. The CHISD School Safety Committee meets a minimum of three times per year. The first meeting was held in December 2019 and not open to the public. Only committee members attend to allow the group to establish norms, a focus, and future agendas.

We have a three-day annual event called Youth Summit where scholars have an opportunity to interact with and get to know members of the CHISD Police and City of Cedar Hill Police personally. These relationships are key to diffusing potential situations. We also have setup a Longhorn Culture Committee – made of CHISD Campus Leaders and District Employees – to address some of the root causes of behavioral issues.”

The boundaries of Cedar Hill ISD Police Department is regulated by the Cedar Hill I.S.D. Board of Trustees, which is documented in the following Board Policy:

The following Texas Education Code dictates the Board Policy:

FDN: It was reported that some students are bringing guns for their own protection. Is this true and, if so, what is being done about that?

CHISD: The Cedar Hill ISD Police Department takes all active threats and rumors of firearms on campus seriously. The information obtained from students, staff and the public are investigated thoroughly to determine if the information is credible. We have not received any credible information that students are bringing guns to school for their own protection.

The Cedar Hill Independent School District utilizes anonymous reporting through an app, which is located on the district and campus website. The campus administration team utilizes Interquest canine services and metal detectors at secondary campuses to randomly conduct searches of students. The District also instills in our students, staff, parents and general public if you see something, say something, and do something.

FDN: Several parents have said there is a problem with pretty much anyone getting buzzed into the schools, especially the high school? Is that accurate?

CHISD: Visitors arrive at the main entrance and are buzzed in by the receptionist. They may enter the attendance office to conduct business, otherwise they must wait in the lobby until they are escorted by an administrator or other high school employees to the appropriate location.

FDN: With school now out for the summer, can we expect some new policies in place come the fall concerning this?

CHISD: “The secondary education team, along with members of the CHISD police
department are evaluating safety procedures and implementing systems that help our campuses operate more effectively and mitigate fights.”