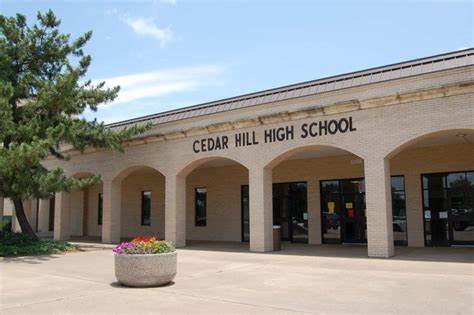 As news of the shooting at Timberview High School in Mansfield broke last week, another school just 12 miles away also had a gun incident.

“Our security was clearing the halls and checking the bathrooms for students,” Cedar Hill I.S.D. Police Chief James Hawthorne explains, “and they came upon a group of students in the boys’ restroom that shouldn’t have been in there.”

Chief Hawthorne said his security officers noticed the group and immediately took action. “As part of their routine duties, they make sure the halls and the bathrooms are clear. One of the students drew the attention of security – and that’s when we discovered the guy had a gun.”

Nobody was injured. The student was arrested.

“Our job is to handle the criminal side of these incidents,” the Chief said. “We don’t handle the administrative side of it. It’s a third-degree felony to have a gun on campus. You’re not allowed to carry a firearm inside of a school building. If convicted, that’s a two-to-ten-year prison sentence and up to a $10,000 fine.”

If it’s a student with the firearm, expulsion proceedings happen pretty quickly.

But Chief Hawthorne says these incidents in his Cedar Hill school system are exceedingly rare. “The last gun on campus was back in 2017.”

Guns on campus has not been an issue, says Chief Hawthorne.

“This year, what we’re seeing is pretty consistent with what I hear from others working in the school district. The students have been out of the classroom for over a year, so it’s an adjustment being back in the classroom, in a school setting, and all the things that go along with that.”

One issue that has been happening nation-wide is the Tik Tok challenges, which students appear to want to become a part of, including destruction of school property. Chief Hawthorne says, “We’ve dealt with those same kind of issues, social media, just like any other school district. I believe 98% are just kids who do what kids do, so they follow the rules, try to be respectful. But that very small two or three percent who want to try you, push where the boundaries are, is when our response has to be swift and positive to show them the right way to act, and where the line is.”

He admits that social media is a challenge. “We just have to make sure that we are staying on top of it, by having the type of relationship with the kids who can alert us to what is going on and responding quickly.”

With eight police officers and sixteen security guards, Chief Hawthorne says he is well equipped to handle any situation that pops up. His 28 years on the Arlington Police Force before his retirement gave him the experience he falls back on now.

He was retired for three years before he was approached by the school system to take over the Chief position in 2016.

One thing that is different is the pandemic, making masks in schools important. “We don’t have a mask mandate, but it’s strongly recommended, and the students have adjusted to it. They wear them without being reminded to.”

He adds, “Whether you’re a police chief in a big agency or a small agency, nothing prepares you more other than being in the chair.” He says a lot of positivity has kept him in the job. “and I keep learning. Working with kids keeps you young.”

Honored For Years of Service to the Community

In March, the Elite News honored him with an award for his years of service to the community. Chief Hawthorne said he was humbled by the award, named after Chief Don Stafford, one of the first black police officers in the Dallas Police Department.

Born and raised in Fort Worth, Chief Hawthorne attended UT-Arlington where he studied Journalism. He began his professional career as a sports reporter for the Fort Worth Star Telegram after graduation, “Then I matriculated to sports director for radio station KNON FM 107.5 for three or four years.” He left there and went to WBAP, switching from sports to news, working for a year there before applying the police department. He admits he enjoyed his years as a journalist, but “I had adult bills and needed and adult job and paycheck.”

Chief Hawthorne and his wife, Ursula, have two grown children. Their daughter is an instructional coach in a local Junior High and their son is a Prosecutor in Tarrant County. Both careers in fields similar to their father: education and law.

Being A Positive Role Model

Chief Hawthorne believes he’ll stay in Cedar Hill I.S.D as long as he’s still learning and it’s still a challenge. He says working with the students and faculty is a joy. “It keeps me young – and busy! I like the idea of learning new things – so the appeal for me is that. The police profession has evolved and changed a lot over the years.”

Working in the school atmosphere he’s in now feels right. “It’s a challenge. But it feels like I need to be in this position I am in now to inspire the young people around me. As long as I can be a positive role model for these students, maybe get some of them thinking about a career in law enforcement, I’ll be here.”

“EDUCATE – EMPOWER – INSPIRE” is the motto of Cedar Hill I.S.D. and it appears Chief Hawthorne is doing just that.