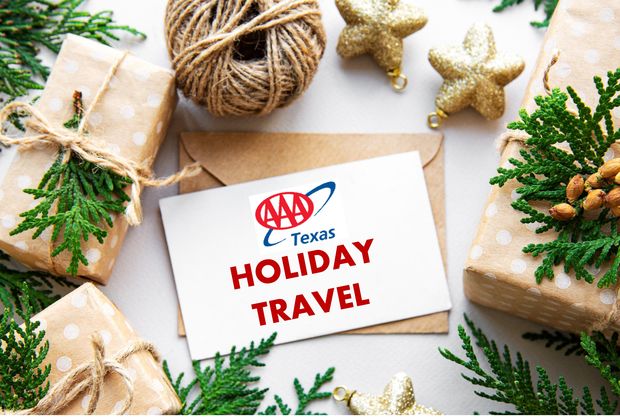 AAA expects nearly 113 million Americans will wrap up 2022 by land, air and sea

’Tis the season to travel, and AAA Texas estimates 8.9 million Texans will journey 50 miles or more away from home from December 23 to January 2. That’s up 3% from last year and about 7% fewer trips than 2019. On a national scale, AAA estimates 112.7 million people will travel 50 miles or more away from home. That’s an increase of 3.6 million people over last year and closing in on pre-pandemic numbers. 2022 is expected to be the third busiest year for holiday travel since AAA began tracking in 2000.

“AAA Texas data shows year-end travel is surging, and trips are already being booked for 2023,” said AAA Texas Vice President and General Manager, Galen Grillo. “The rebound in travel during the second half of 2022 has helped create momentum for 2023, including for the upcoming ‘wave season’ from January through March, when cruise lines offer some of their best promotions.” 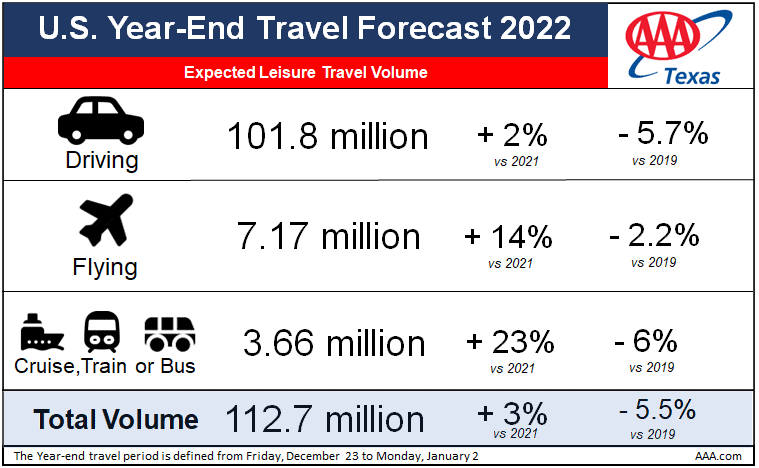 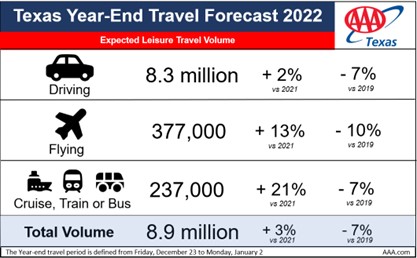 In Texas, around 8.3 million people will drive to their holiday destination and, across the country, nearly 102 million Americans will hit the road. Despite roller-coaster gas prices in 2022, this holiday season will see an additional 2 million American drivers compared to 2021. Travel by car this year is on par with 2018 but shy of 2019 when 108 million Americans drove out of town for the holidays, the highest year on record.

Other modes of transportation are also rebounding in a big way. In Texas, 237,000 people will take a cruise, train or a bus, which is up 21% from last year. AAA estimates travel by bus, rail, and cruise ship will rise to 3.6 million this holiday season on a national scale, a 23% increase from last year and nearly 94% of 2019’s volume.

NRIX, a provider of transportation analytics and insights, expects the most congested days on the road to be Friday before Christmas, December 27 and 28, and on Monday, January 2, as travelers mix with commuters. In major metros, drivers could experience double the typical delays. Around America, drivers could see travel times up to 25% longer.

With pre-pandemic levels of travelers hitting the road this holiday, drivers must be prepared for delays in and around major metro areas, with Tuesday, December 27 expected to be the nation’s worst day to travel. The best advice is, if possible, to avoid traveling during peak commuting hours. If schedules allow, leave bright and early or after the afternoon commute. AAA Texas wants drivers to remember ‘Don’t Drive Intoxicated, Don’t Drive Intexticated.’ Also, AAA Texas reminds drivers to adhere to the state’s Move Over or Slow Down law to help protect emergency roadside responders, including tow truck operators.