Proving once more the level of talent for women’s basketball talent in the area, two players from the Best Southwest area were selected in the WNBA Draft this Friday.

Former Mansfield Timberview and Texas A&M standout Chennedy Carter was the fourth pick, taken by the Atlanta Dream. She becomes the highest selected women’s basketball player ever drafted from the Aggies.

Former Cedar Hill and University of Texas Lady Longhorn Joyner Holmes was taken in the second round with the 19th pick by the Seattle Storm.

Due to the COVID-19 pandemic, the draft was held virtually on ESPN as the draftees participated remotely.

“I just think everything I’ve learned in my whole life, my whole life experience has been a journey,” Carter said. “I’ve continued to get better, and I think that will translate in the WNBA. My work ethic, my confidence and how hard I’m determined to win.”

Chennedy Carter is the highest drafted Aggie in WNBA history

Carter overtakes Kelsey Bone, drafted fifth in 2013, as the highest-drafted Aggie. She also joins Bone as the only players from A&M taken in the first round.

Carter is A&M’s second all-time leading scorer and the most prolific scorer in this year’s draft with 22.5 points per game in her career. She is one of the most decorated players in program history, with a resume that includes:

Named an All-American in first three years of her career at A&M, first Aggie to accomplish the feat.

First player in program history to be selected to the All-SEC First Team in first three years of career.

Was the unanimous National Freshman of the Year in 2017-18

Set the Texas A&M single-game record with 46 points at USC (Dec. 15, 2017), in addition to posting the fourth, fifth and sixth highest-scoring games in A&M history.

Averaged 31 points per game in her first six NCAA Tournament games, which ranks third all-time among players with five-or-more games in the tournament.

“I’m thankful for everything that I’ve been through this far. To be able to say that I’m now a professional basketball player, and I can’t wait to get started with the Atlanta Dream,” Carter said. “I’m very excited, ready to get to work, ready to practice ready to just get going and start my WNBA career off. I’m excited what this journey has in store for me.” 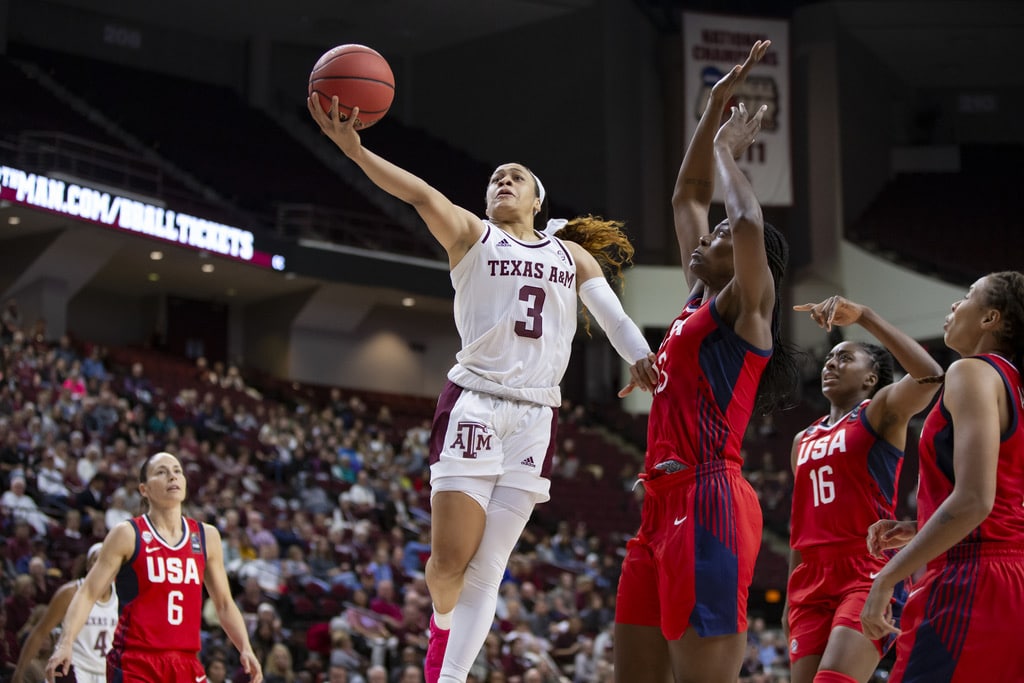 Carter has represented the United States three times in international play, winning a gold medal at the 2016 FIBA Americas U18 Championship, and silver at the 2017 FIBA U19 World Cup and 2019 Pan American Games. She set a USA Basketball U19 record with 31 points in the Gold Medal Game at the U19 World Cup.

Holmes was also on the 2017 silver medal squad. She was also a member of Team USA’s gold-medal winning U17 World Championship team in 2014, earning all-tournament accolades.

In high school, Carter led Timberview to a Class 5A state runner-up finish in 2017, capping a career record of 70-4 in her final two seasons. She and Holmes were both McDonald’s All-Americans, and both played in the Jordan Brand Classic, where Holmes was named MVP.

“I’ve coached since 1980 in college basketball. I’ve never had a guard that can create offense as fast and efficient as Chennedy does for herself and others with her passing and ball handling,” A&M Coach Gary Blair said. “She will become a great pro because of her passion and her quest to improve her game in every aspect. Number 3 will be missed but never forgotten at Texas A&M.”

Holmes, a senior, played in 114 career games for Texas and ranks 29th in scoring in school history with 1,270 points. She recorded 27 career double-doubles and, this past fall, set the Texas school record for most consecutive double-doubles with seven.

Holmes earned All-Big 12 recognition three times in her career and was the 2017 Freshman of the Year in the Big 12. She averaged 11.1 points per game and 7.5 rebounds in her career.

In her senior year Holmes was a finalist for the Katrina McClain Award, recognizing the nation’s top power forward. She tied for the team lead in scoring with 13.1 points per game and was second in rebounding with 8.7.

“We were very high on Joyner. When you see her play, you see someone that is kind of unique,” Storm Head Coach Dan Hughes said. “There’s no denying she has a big upside. We wanted to work with that upside. We were really pleased to give her an opportunity and get her in the second round.”

The WNBA season regularly runs from late May through early October. However, due to COVID-19, the status of the season is uncertain. Holmes said she is putting it all in God’s hands, calling the current pandemic bigger than the game.

“I am trying to continue my workout regimen and hoping for the best,” Holmes said.