From Texas to Washington, Joyner Holmes Heads To Seattle

CEDAR HILL, TX  – Joyner Holmes is one of the best athletes in the storied history of Cedar Hill ISD.

As a high school senior in 2016, she was the top girls basketball recruit in the United States and became the first female CHISD Scholar to be selected to two prestigious games – the McDonald’s All-American Game in Chicago and the Jordan Brand Classic in New York City.

Holmes, now a 22-year University of Texas senior, made history once again on Friday night when the Seattle Storm drafted her in the second round (19th overall) of the 2020 WNBA Draft. She became the first CHISD athlete to be selected in the WNBA Draft, and Seattle is just two years removed from a WNBA Championship.

Only 10 UT Women’s Basketball Players have been drafted by the WNBA, since the League started in 1997. Holmes became the sixth former UT player to be drafted in the Top 20.

Longhorn fans — both CHISD and UT — will be able to see Holmes play when the Storm visits its Western Conference rival, the Dallas Wings, who play their home games at the College Park Center in Arlington.

The COVID-19 Crisis has altered plans globally, and the sports world is no different.

On March 13, Holmes – a 6-foot-3 forward and her UT teammates were planning on facing West Virginia in the first round of the Big 12 Conference Tournament in Kansas City, Missouri. The Tournament was abruptly cancelled.

At first, Holmes thought about the lost opportunity to lead UT back to the Final Four for the first time in 17 years but over the past month, her perspective has broadened.

“I felt like honestly, our team was peaking at the right time,” Holmes said. “I trust whatever has happened. It is in God’s Hands. I was able to sit back and analyze it, seeing that it’s bigger than basketball.”

Under normal circumstances, Holmes would be traveling to various cities and working out before WNBA team executives.

Instead, she has held teleconference meetings with teams. She’s trained on the basketball hoop at her house. Also, she’s improvised with running and push-ups to make up for weight training.

Rather than a draft party with family and friends, Holmes will have a quiet celebration at home with her family.

WNBA Season Is Uncertain For Now

There’s uncertainty around the WNBA Season, which regularly runs from late May through early October. Holmes likely won’t be able to train with her new team, at least not right away.

“I am trying to continue my workout regiment and hoping for the best,” Holmes said.

Holmes was a four-year varsity player for CHHS, leading the Lady Longhorns to the Regional Semifinals as a senior, and twice to the Regional Quarterfinals in earlier seasons. She played for Andrea Robinson her first two seasons, and current head coach Nicole Collins for her final two.

“Her athleticism and talent made the game easier for those around her,” Collins said. “She had such an unbelievable impact on both ends of the floor that could not be accounted for. I’m not surprised that she went on to have a great career at UT and now placed herself in a position to make a professional career out of her talent.”

Holmes was recruited by nearly every women’s college basketball program, including UConn, which was the four-time defending NCAA Champion, in 2016. Tennessee, Notre Dame and Baylor also expressed serious interest.

She chose Texas because it was “family-oriented, much like Cedar Hill”. Plus, she knew her parents could travel to the games in Austin, as well as short trips to Big 12 road games at TCU and Baylor, respectively.

Holmes earned Big 12 Freshman of the Year honors and contributed seven points and 12 rebounds as UT upset No. 2 Baylor, 85-79, in February 2017. That was significant, since Baylor wouldn’t lose another Big 12 regular season game until last month.

At UT, Holmes averaged 11.1 points and 7.5 rebounds. She finished with 27 career double-doubles, including a school record seven consecutive double-doubles. She played in 114 games, starting 92 of them and scored in double figures 70 times. During her time in Austin, UT reached the NCAA Sweet 16 twice and the first round of the Tournament last season.

Holmes scored a career-high 27 points in a victory over Southern as a senior. Last December, she finished with 13 points and eight rebounds in a 69-64 victory over top-ranked Stanford in Austin.

In addition to playing professional basketball, Holmes has plans of a sports broadcasting career – both during and after her athletic career. 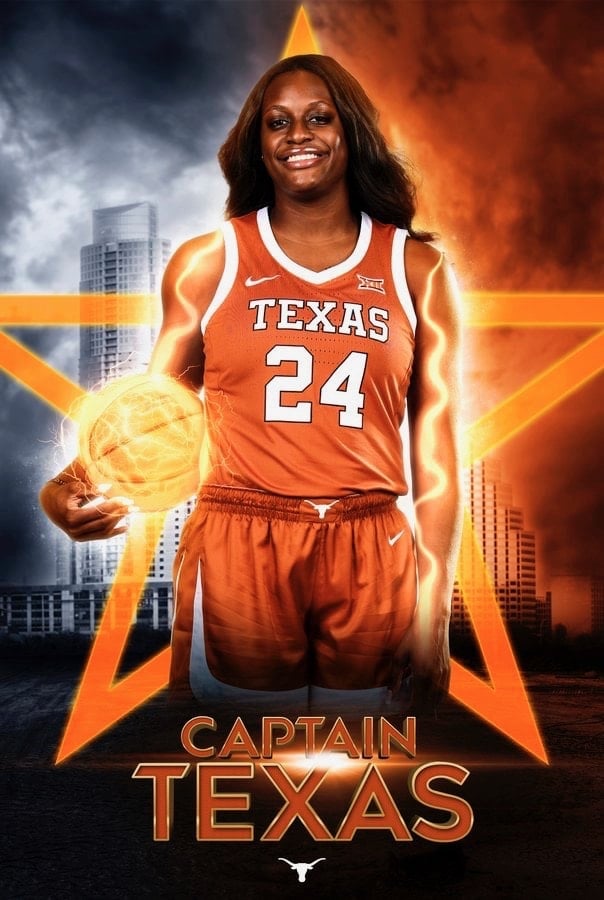