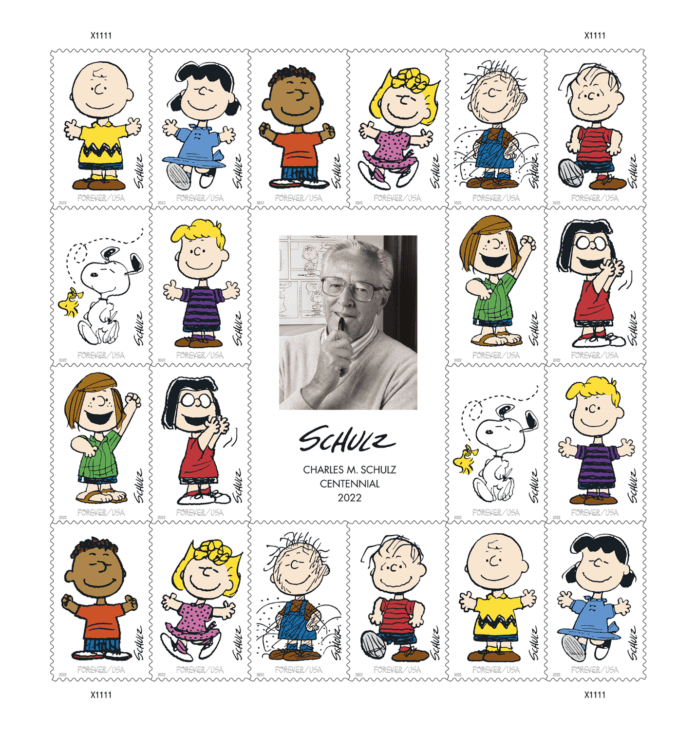 In a commemorative mode, characters from his beloved comic strip “Peanuts” adorn the 10 designs on this pane of 20 stamps. They are Charlie Brown, Lucy, Franklin, Sally, Pigpen, Linus, Snoopy (with Woodstock), Schroeder, Peppermint Patty, and Marcie.

The first-day-of-issue event for the Charles M. Schulz Forever stamps is free and open to the public. Share the news of the stamp with the hashtag #CharlesMSchulzStamps.

The centennial of the birth of cartoonist Charles M. Schulz (1922-2000) brings new stamps celebrating his wit and wisdom through his unforgettable “Peanuts” characters. The groundbreaking comic became history’s most popular and successful strip.

In the 1960s, “Peanuts” became a worldwide phenomenon with beloved television specials, books, a Broadway show and countless products. For five decades, Schulz steadfastly wrote, drew, inked and lettered every “Peanuts” strip — nearly 18,000 of them — the last one published the day after he died.

Schulz won many awards during his lifetime. In 2000, he was posthumously awarded the Congressional Gold Medal, the highest civilian honor bestowed by Congress.

Customers may purchase stamps and other philatelic products through the Postal Store at usps.com/shopstamps, by calling 844-737-7826, by mail through USA Philatelic or at Post Office locations nationwide.

The Postal Service generally receives no tax dollars for operating expenses and relies on the sale of postage, products and services to fund its operations.