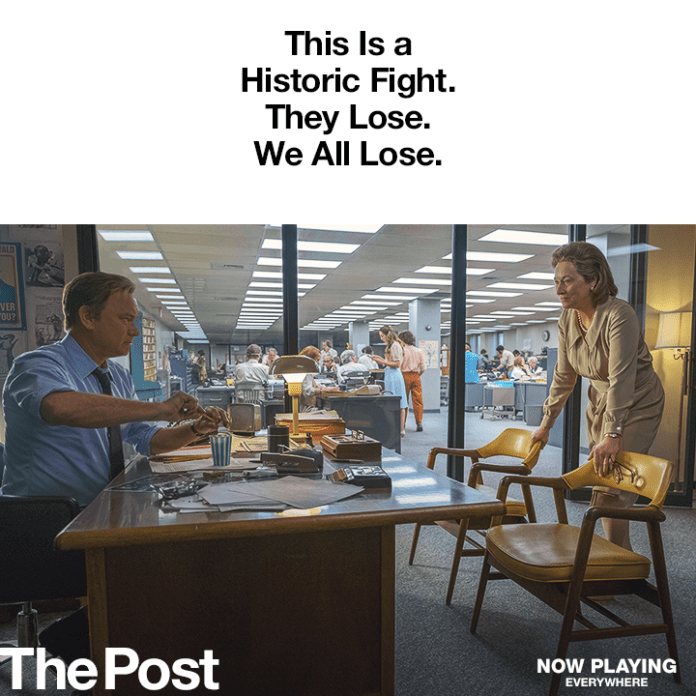 “The Post” Reminds Us of The Importance of a Free Press

I’ve been cooped up at home since the first of the year with a combination of the flu and legs that have “refused to perform” as God intended. Kristin said it was time to brave the big bad world today. So we went to the movie theater, and saw what I regard as the best movie with the most important message I have seen in years – The Post.

The Post, details how the New York Times and, primarily the Washington Post used information supplied by Daniel Ellsberg to reveal how the American public had been systematically lied to by their government. Lied repeatedly, over numerous presidential administrations – Truman, Eisenhower, Kennedy, Johnson and Nixon. This is an amazingly long list of administrations that showed no regard for the American people and indeed, the people of the world, by deceiving them about the true nature and progress America was making in their administration of the Vietnam war.

Its of particular significance to me because I was employed by the largest newspaper in the country at the time, the New York Daily News. The newsroom depictions are portrayed very accurately as to the attitude of the editors and publishers of the time – “We will publish the truth, regardless of who it involves.” I can point to numerous instances during my career when newspapers lost large amounts of revenue by exposing abuses of power or unsafe actions by companies which could hurt the general public.

To Publish or not to Publish?

Katherine Graham, the publisher of the Washington Post, was faced with such a decision. Should she give the approval to Ben Bradley, her editor, to publish the Pentagon Papers, it could have easily led to the demise of the newspaper itself. Richard Nixon, President at the time, had threatened numerous actions, up to and including taking the New York Times to court over articles it had published about government deceit concerning the Vietnam War.

The case eventually went to the Supreme Court, which ruled for Freedom of the Press by a 6-3 margin. Perhaps the most striking opinion concerning the vote was written by Justice Hugo Black, who wrote the framers of the constitution intended to protect the media from government censorship. “The newspapers nobly did precisely that which the Founders hoped and trusted they would do,” Justice Black said. The Fourth Estate, as the media is called, is in place to protect citizens from the government, not the government from the citizens.

Anyone and everyone over the age of 12 should see The Post, to better understand the importance of the free press.