Thankful For The Opportunity To Serve

Woods official resignation came at the October 6 meeting at which time he said he did not plan to remain under the hold-over provision until a successor was seated.

However, since his announcement, Woods has changed his mind and has agreed to remain in that seat.

“My wife and I genuinely waited patiently for our education system to improve and provide the necessary services that our son requires and it has come to a point where we can wait no longer,” Woods said on his Facebook page on October 1.

As he spoke to council giving his resignation he said “I have tried to stay where I am or go to other school districts… my concerns are that my concerns are falling on deaf ears in other neighboring districts. I can’t really do too much about that. With all that being said I had to make a decision about my future for my son and my family to ensure he would be able to get everything he needs to prepare him for this game we call life. Something I didn’t want to do.”

Woods said with teary eyes he was dreading his resignation all day. He thanked the citizens of Glenn Heights for their support and for giving “a young man like me an opportunity to serve this community.”

Glenn Heights City Manager David Hall and Woods talked after the resignation and Woods has agreed to stay on in his seat, since meetings are held virtually due to the pandemic.

The special election to fill Place 3 will likely be called in February 2021 if approved by council at the November city council meeting. In the event meetings are moved back to in-person before the Special Election, Woods said he and Hall will reconsider the hold-over provision.

From Glenn Heights To Houston

Woods has already moved to the Houston area for his son to begin school.

“I really enjoyed my time serving the citizens of Glenn Heights during my tenure on the council,” Woods concluded this week in a statement to Focus Daily News. “While it is unfortunate that I have to resign and forfeit my seat, it was a great pleasure working with the other councilmembers, city staff and other countless professionals to help bring Glenn Heights to newer heights. I value education with the highest regard, and we were not confident DeSoto ISD would be able to fill that commitment.

While we are on the south side of I-45, my heart will always be with Glenn Heights, which is why I agreed to continue to serve until my successor is seated. I would like for everyone to know, I love you all and especially to the young men and women of Glenn Heights, you too can make a difference.  Always aim high and never settle.  I’ll see you all in a little while.” 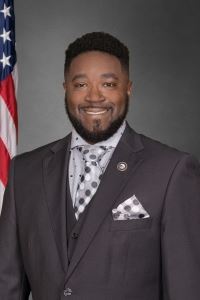