Home Commentary Philosophizing While Cleaning Out My Sock Drawer

There are times when life is overwhelming. It offers so many choices. There are even some things that need to be done immediately. When this occurs, I usually mop my kitchen floor or rearrange the pantry or scrub out the trash bin after the garbage truck has been around for collections.

But on this particular Saturday, my day was too cluttered with things to be done, places to go, and other tasks screaming for attention. Not able to prioritize things in a sequential manner, I just decided to clean out my sock drawer.

This chore has never been high on my priority list. I would rather clean the grout in the shower or wash the neighbor’s dog than clean out the sock drawer It hadn’t been organized since I moved into the house four years ago.

Before I share with you this most noble of experiences, I have some questions I need you to consider. Because I seem to have a dozen or so socks without mates, I have often wondered. Where do socks go? I lose about four or five socks a month. They are never recovered, yet the house is locked, there are few visitors, and very little demand for a single sock in the neighborhood. So where are they? Also, I find socks that I have never seen before. It is like someone came into my house, left their old pink and green plaid ones and took one of my favorite brown or black socks.

Also, I have an interesting compulsion. I hate to throw anything away if it isn’t broken, stained, or missing parts. So when a sock wears out, I keep the mate just in case I can find it a partner. Today the sock inventory was 24 pair that had reasonably compatible mates, and 31 single socks with nothing like their color of fabric left in the drawer.

White socks and black socks are never discarded because they can always be paired with gray, green, brown, yellow or blue sock as partners. Ever since college, socks were worn by me for practical purposes as opposed to style or matching colors.

Some years ago, I was asked to speak for the graduation service at a small high school in west Texas. The superintendent had told me there would be 30 students graduating. There would also be an audience of a several hundred parents, relatives and town folks in the audience. In the envelope that contained my $50 speaking fee was this reminder, “Keep it short, don’t use big words, inspire the kids and tell some good jokes.”

“PS: The best place to eat in town is the Dairy Queen. Eat before the commencement service because they close early.”

After eating a Hunger Buster and fries with a large chocolate shake, and taking a bathroom break, I walked over to the school. It was an old school building, but it was clean. From observing the arriving crowd I could tell the people had a great pride in their school and community. I met some of the folks before I took my place on the stage next to the podium.

As I sat there, I couldn’t help but notice how friendly everyone appeared to be. They smiled and even shyly pointed at me while the rest of the ceremony continued. Finally, I looked down and saw what all the smiles were about. I had on one black sock and one yellow sock. Rather than being embarrassed, I rather enjoyed the attention. After I was introduced and walked toward the podium, the applause was very healthy, and when I turned to face the audience there was some loud laughter. The more expansive I became with my gesturing and the closer toward the front of the stage I stood, the funnier I became. One guy in a cowboy hat was laughing so hard that I thought his wife was going to have to remove him to the foyer.

Even the graduates appeared in a festive mood. It seemed to take my message about the obstacles in one’s life as an uplifting topic. The superintendent didn’t laugh that much, but did appear to be sympathetic about my socks, by covering his face with his hand and trying not to laugh. However, his face was red and tears appeared in his eyes.

Toward the end of the speech there was a general uproar and folks were laughing no matter what I said. I was amazed at how much excitement two different colored socks caused. Yet I did wonder why there was still so much laughter because when I stood to speak you couldn’t see the mismatched socks. The more animated I became, the more laughter was heard. When I concluded with a poem by Robert Frost, the cowboy became so inspired that he threw his hat on stage.

As the audience exited the auditorium, many waved and yelled words of encouragement. One voice even extended an invitation to come back next year. After everyone had left, the superintendent came over, put his arm around me and said, “Son, you delivered a powerful message. One that this community won’t forget for some time.”

“Thank you, Sir,” I responded. “And I am sorry about the different colored socks. I didn’t realize it could be so funny.”

“It wasn’t your socks that was so funny,” said the superintendent,

“But the fact that your pants were unzipped. We could see clear to Lubbock. The town hasn’t had this much excitement since the dry goods store burned down.”

Leaving that small Texas town late that night, I knew that I would never be invited back. And I wasn’t. But the next year a neighboring district asked me to bring the commencement message.

Well, the drawer is cleaned out now. If I throw away the socks with no mates and the ones unraveling or with holes in the toe, I have about seven pair left and they are all brown. I think to resolve the matter of missing socks I’m just going to buy brown socks. Brown socks can be worn with any color, right. Yeah, brown socks go perfectly with my new black tux. 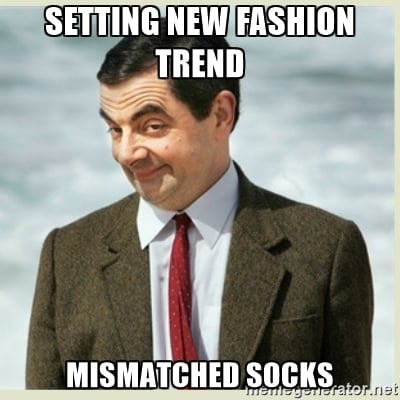