Home Schools DeSoto ISD On the Academic Side of History, DeSoto ISD Class of 2022 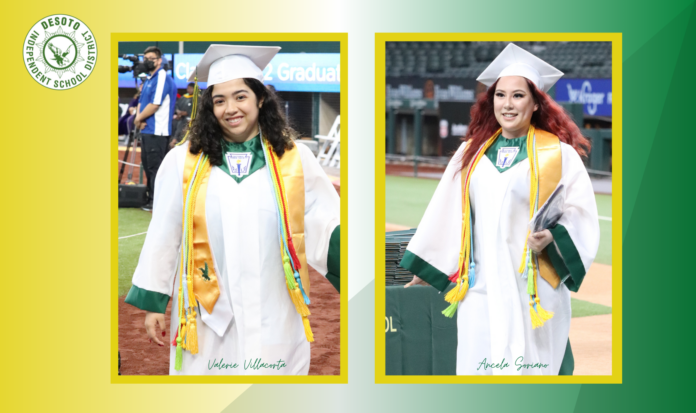 (DESOTO, TX) — When the DeSoto Independent School District, students and families gathered for the graduation ceremony on May 23, 2022 at Globe Life Field in Arlington, Texas, history was among the sea of white gowns trimmed in green. The top two students in DeSoto High School’s Class of 2022 were of a hue, in these roles, the school had never seen.

“From what I’m aware, this is the first time that the top two graduates at DeSoto High School were both Hispanic women,” valedictorian Valerie Villacorta said during her allotted time to address her classmates and the crowd.

Villacorta and salutatorian Ancela Soriano both acknowledged from whence they came during their commencement speeches.

“Thank you mom for inspiring me, thank you dad for teaching me hard work, and thank you to my grandparents for keeping my Mexican heritage alive,” Soriano said.

Delivering half of her speech in Spanish, Villacorta felt it was befitting to do so.

“Our culture and background played a big role in our lives, so we wanted to directly address the members of our community that are here with us today that might struggle a bit with English, because without them, a lot of us probably wouldn’t be who we are today,” Villacorta said to the audience before her language shift.

DeSoto ISD is a majority African American district at 73.12%. The number of Hispanic students ranks second highest at 21.88%. For both the valedictorian and the salutatorian to be Hispanic is no small feat.

District officials have confirmed that Villacorta and Soriano are the first Hispanic students to be simultaneously named the District’s valedictorian and salutatorian in the same graduating class.

“The District has had scholars of Hispanic descent graduate in the respective roles individually; however, this year’s valedictorian and salutatorian appointments are a confirmed District first,” Director of Communications Tiffanie Blackmon-Jones said.

Villacorta plans to study government or political science and hopes to eventually become a lawyer. She will attend the University of Texas at Austin in the fall. Her career goal is personal.

“Definitely the struggles that my family has been through as immigrants,” Villacorta said. “ I want to help people who are in my position who would be able to make contributions to our society but aren’t able to because of their citizenship status.”

Soriano will attend Dallas College and plans to study psychology with hopes of becoming a psychiatrist.

Congratulations to Villacorta and Soriano on their accomplishments and for being historymakers at DeSoto High School.