This Is Not ‘Just Another” Lemonade Stand, Mila’s Lemonade Is A Business

Make no mistake, this is Mila Dyer’s business. And it’s more than a run-of-the-mill lemonade stand.

“It’s called Mila’s Lemonade and I get to be the boss,” Mila said. “My mom and dad are the helpers. I have a super cool stand that is pink and yellow that I helped design. I serve fresh squeezed lemonade, and we squeeze all the lemons ourselves.”

“I also sell baked treats, and you get a free sucker with your lemonade. I have social media, signs, a banner, t-shirts, a Square, CashApp, Venmo and my own logo.”
In other words, this isn’t your average lemonade stand. The Grand Prairie youth has a mind for business though only 7 years old.

“Mila’s Lemonade is a business, not just a stand to be a quick fundraiser. Once customers come to the stand and they see the whole setup, or just saw pictures on social media, I believe they get it,” said her mother, Lawana Dyer. “They understand and appreciate the time and effort required to create a business and they are getting all that at what is still at its heart a little girl’s lemonade stand.”

It is difficult to make your business stand out in such a well known and established market, but Mila, a second-grader at Anna Mae Daulton Elementary School, has built a brand that has managed to do just that. She has resonated with several other small business owners who have reached out to provide her opportunities to expand and grow her business.

Making Her Dream A Reality

Lawana said that even the City of Grand Prairie Chamber of Commerce is planning to create resources for young entrepreneurs because of communications with Mila’s Lemonade.
Mila got the idea for her business after telling her parents she had a dream about opening a lemonade stand. They asked her to draw picture of what it looked like so she wouldn’t forget, so she drew one in her journal and made it one of her goals for the year.

“I kept asking my parents when I could have a lemonade stand, but they kept saying not right now because of the virus. My dad finally built me a lemonade stand for my birthday in July. My mom did some research, learned about Lemonade Day, and registered me,” Mila said. “I started watching the videos and learned about how to start a lemonade business.

The other Lemonade Day kids helped me learn about all the things I needed for my business like what supplies I needed, how to make a budget, and marketing.”

Mila opened her stand on Lemonade Day, Aug. 22, in her driveway with masks, hand sanitizer, cups with lids, and pre-wrapped straws.

“I was able to meet lots of neighbors, people who saw me on social media, and cars passing by who saw my awesome stand and signs. Thanks to everyone’s support we sold out our first two days of opening,” she said. “I now have lots of customers that come back each time we’re open.

Mila is Hands On, This Is Her Business

This is a first for Mila, who said she is actually shy. However, her lemonade stand has brought out the extroverted side of her, she said.

“I talk to the customers by myself and I use my tablet to take all the orders on the app, and it’s not really scary for me. My parents told me that if I want to have a lemonade business, they will help me, but I have to do the work because it’s my business,” Mila said.

It’s easy to see where Mila gets her creativity. Her father, Michael, is an aerospace engineer, and Lawana spent the past 10 years working as a healthcare executive, but recently transitioned to pursuing her creative passion as a voice actor.

A Pop Up Shop

Mila’s stand is open mainly on the weekends, usually from 11 a.m.-3 p.m. It’s a pop-up shop, so follow her on social media to know when they are opening.

The stand is set up in their driveway at 2840 England Pkwy. in Grand Prairie, but she wants to sell at other places too. She also opened up a stand at her grandmother’s house in Louisiana during their last visit.

“We brought as much as we could from Texas, but my stand doesn’t fit on the airplane,” she said with a smile.

A regular lemonade costs $2 a cup and strawberry lemonade goes for $2.50.

“I want to try different flavors, depending on the season, so my mom and I are working on a fall/winter lemonade recipe right now,” she said.

“We make all the lemonade. I help my dad juice the lemons. Sometimes he lets me use the electric juicer. My mom and I make the secret family recipe and I’m the taste tester,” Mila said.

“My mom and dad help me run the stand. I take all the customer orders and deliver it to them. My dad fixes the lemonade, and my mom makes the change. Hopefully when Covid is over my Godbrother Tony or some of my friends can help me.”

Michael said once they settled on the design aspects, she went with him to purchase all the materials, paint, and decorations for creating the stand.

“She has always been my little helper but this was a gift, so I didn’t let her see too much until most of it was built,” he said.

Her mom created all of the marketing material and logo design, but not without Mila’s input and stamp of approval. She helped cut and squeeze lemons to make the first test batch of lemonade and every batch since. She sells to all the customers and Mila’s Lemonade doesn’t run without her, Michael said.

“Once, the three of us were in the car and my wife and I were discussing lemonade without really including Mila in the conversation. Later that night she asked me why I wasn’t pay attention to her,” Michael recalled. “The question seemed a little odd because I had spent time playing with her that day so I asked her what she meant. She said, ‘In the car.’ I replied, ‘Oh, when mommy and daddy was talking about your lemonade stand?’ I will never forget her response. Mila said, ‘Yes, I need to know all that stuff because I’m the boss.’

“She is truly involved and passionate about all aspects of her business. It is the only thing I can remember her jumping out of bed in the morning for besides gymnastics.”

She’s even mastered the art of company incentives, and how giving something away for free can bring repeat customers.

“Anybody who works at my stand can get free lemonade,” she said. “I’m getting my very own stickers so kids can get a sticker and a sucker with their lemonade.”

Thinking About The Future

And, like most successful business people, Mila, who calls herself a “kidpreneur” is already thinking about projects down the road.

“I want to own a hotel for paying people and a free hotel for the homeless,” she said.
“We are both so very proud of her and we are amazed how much she has grown socially as she has built her business. We see her confidence growing not only in her business but other areas as well,” Lawana said. “She has tons of ideas and this is only the beginning for Miss Mila.” 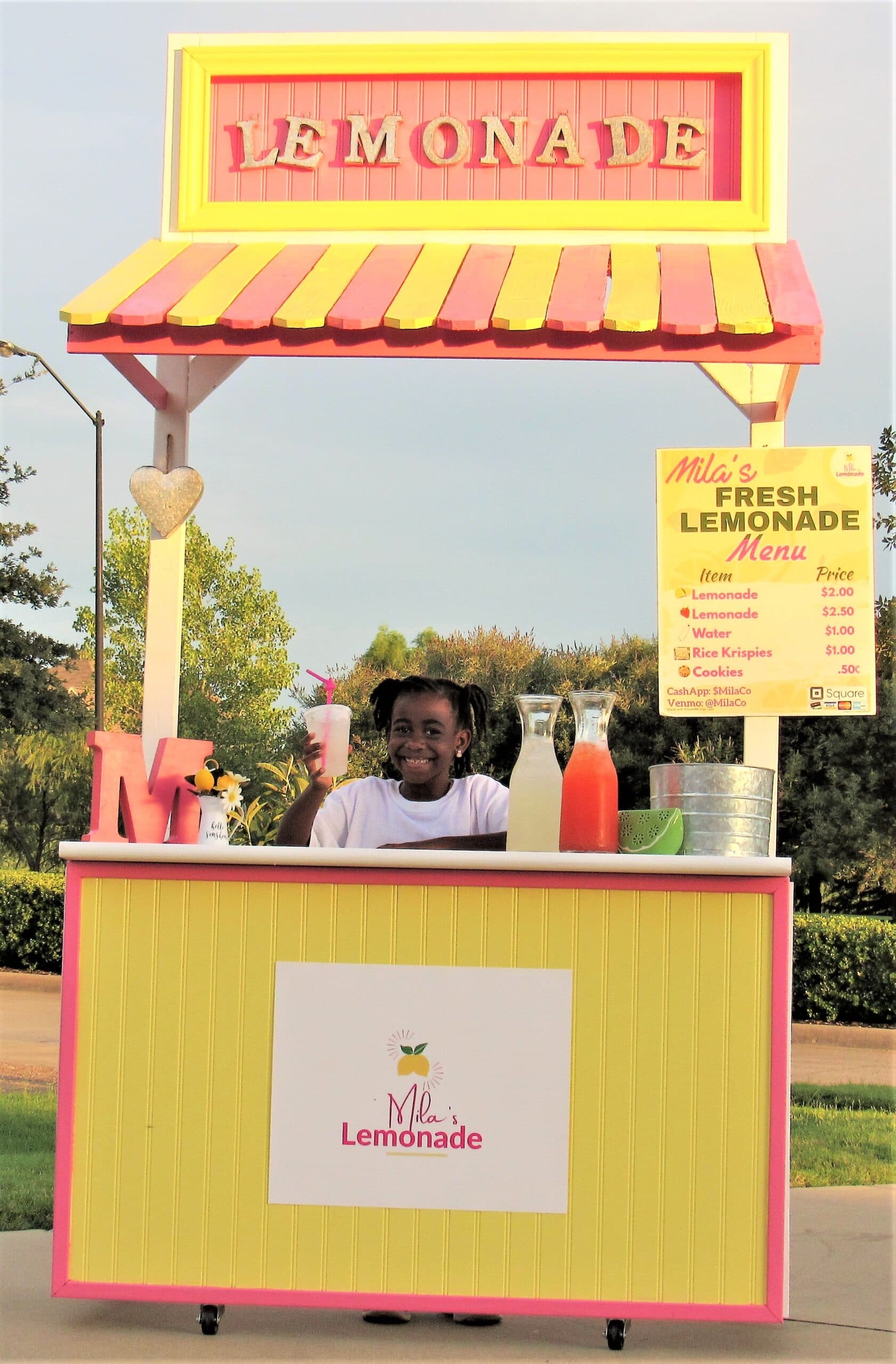