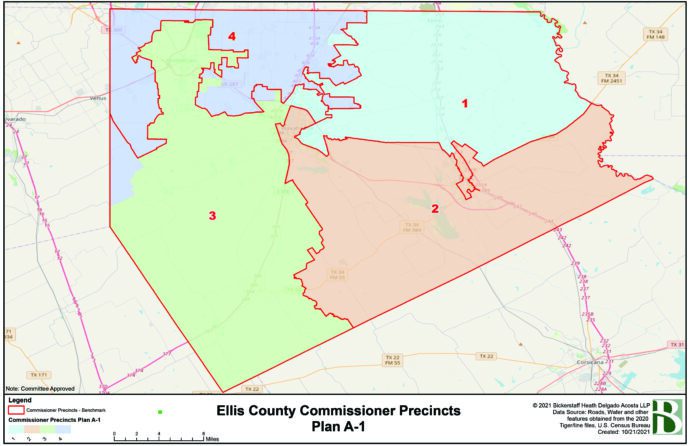 Ellis County Redistricting Has Residents Concerned About Changes Being Balanced

MIDLOTHIAN – Residents in Midlothian could be affected by upcoming changes regarding the county commissioner’s precinct boundaries.

With the 2020 census and redistricting maps being drawn around the state, counties in Texas are redrawing boundary lines.

This year’s redistricting effort will be the first time in 56 years that Texas jurisdictions have been given a green light to make major redistricting decisions without federal oversight.

Several of the precincts in Ellis County have grown, while others still remain less populous. To create a more balanced population in each precinct with the 192,455 residents now living in Ellis County as opposed to the 150,000 residents in 2010, there were two maps presented at the special meeting to outline a better balance.

The ideal balance for each precinct is 48,114. Neither map offers that balance, however, Map B comes closer to the overall ideal.

Currently Map A deviates by 9.76% calling for more imbalance in both Precincts 3 and 4, which affects Midlothian. 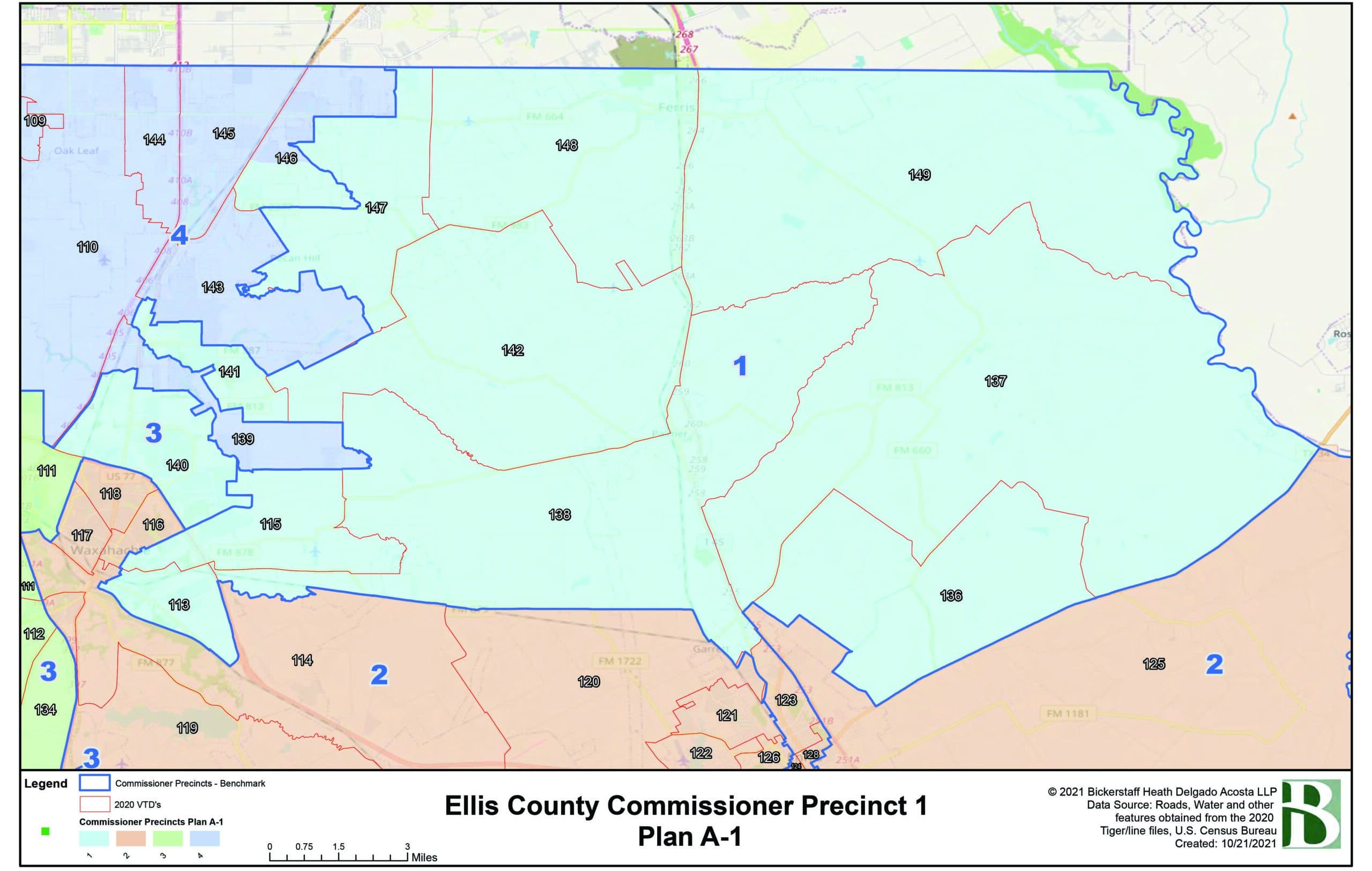 Map B Deviation Less Than 6%

More population balanced is Map B with a deviation of only 5.73%.

“The 2020 Census revealed population imbalance between the precincts because some areas have experienced more development than others over the last decade,” Ellis County Judge Todd Little said.

Residents Speak Out About The Proposed Maps

Both maps were presented at last Wednesday’s special meeting with residents voicing their concerns about the map boundaries some questioning Map A as a viable option.

One resident spoke out stating that she did not believe minorities in the district were being properly represented. 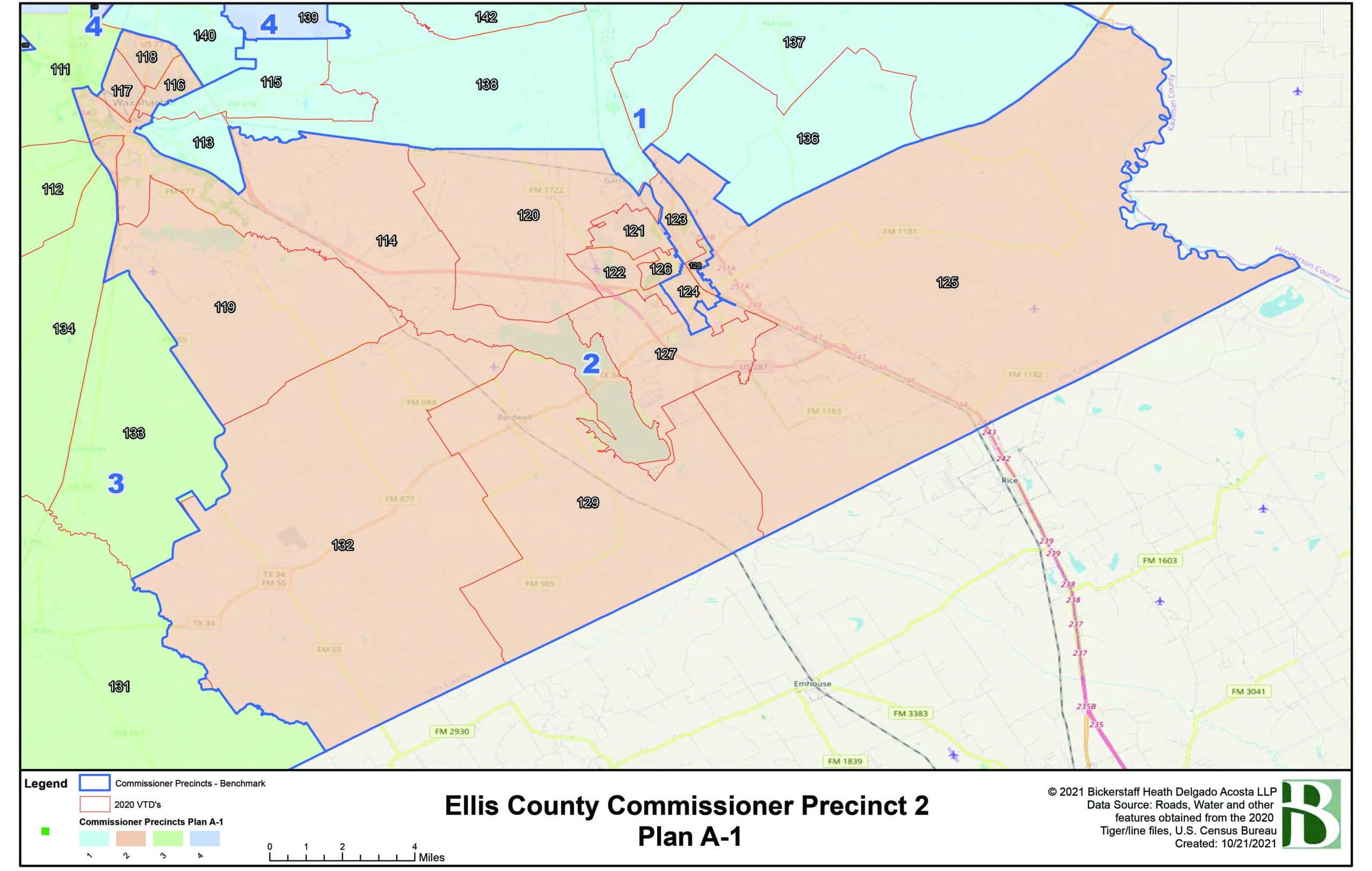 Precinct 3 County Commissioner Paul Perry whose district is Midlothian said this in a statement after the meeting. “I think it’s important that we honor the work done for us by the citizens committee in consultation with our outside counsel.” 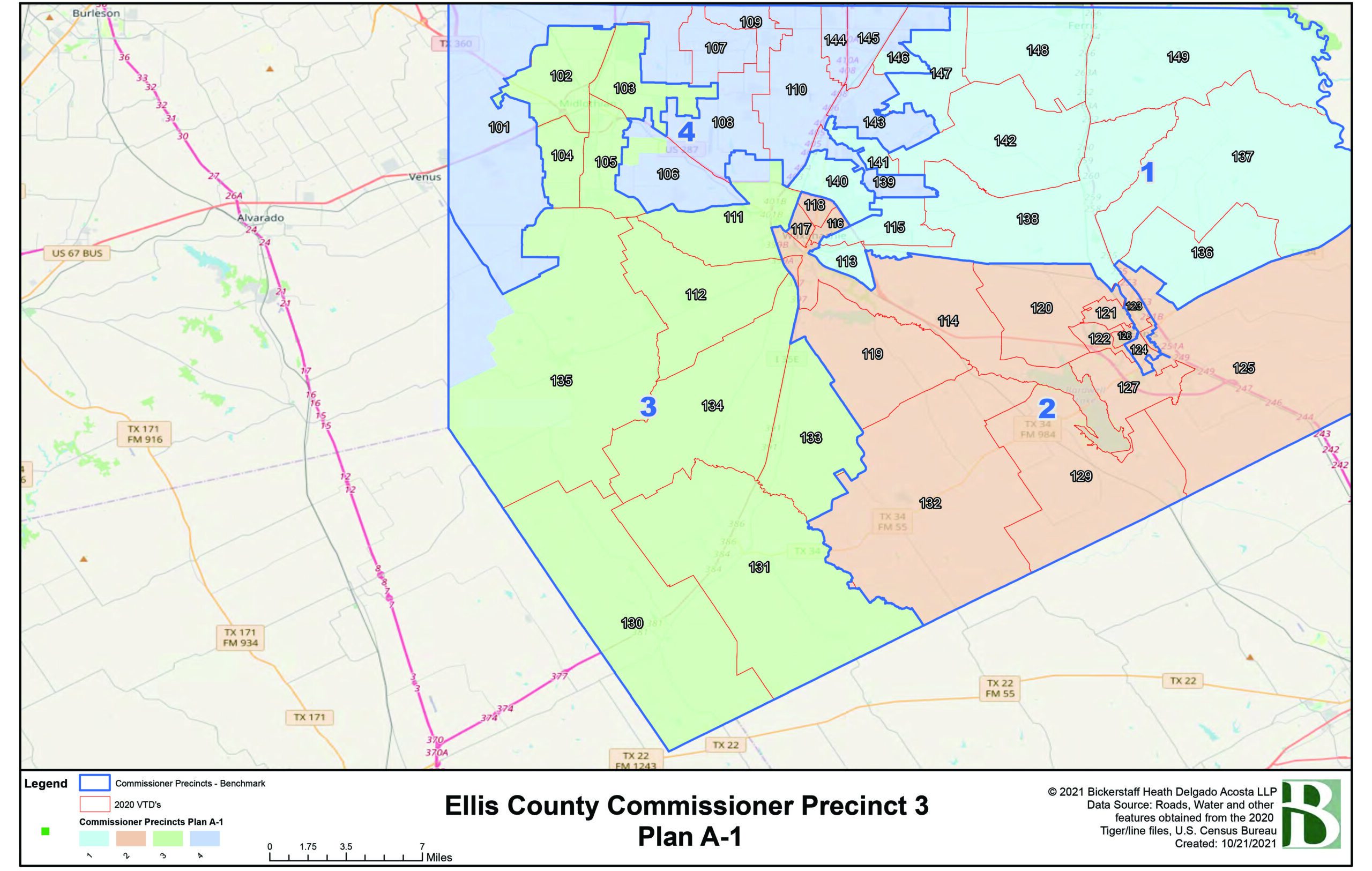 Perry’s Precinct is the largest and has grown significantly in the last 10 years.

“Our outside counsel specializes in redistricting issues,” Perry added. “One of the alternatives offered for commissioner precincts is acceptable to me.”

While current boundaries during this redistricting are certain to change, one resident whose land is currently located in Precinct 4 said he believes the Map A change is a direct move to get him out of Precinct 4 District. He said he has mentioned in the past his plans to run against current Precinct 4 Commissioner Kyle Butler.

Map A has the little piece of land belonging to Louis Ponder moved from Precinct 4 to Perry’s Precinct 3.

Ponder owns a 40-acre tract of land in Midlothian between Mt. Zion and Plainview Road. Ponder’s homestead and his family have owned their property for more than 120 years.

Following the meeting some residents said, Ponder’s property is being “gerrymandered to a different precinct because he has said he would run for a county commissioner seat in Precinct 4 where Kyle Butler currently sits as a County Commissioner.”

Where Did Map A Come From?

“I was receiving many Ellis County residents’ requests, asking me to run for public office, more specifically, to run for County Commissioner, precinct 4, against Kyle Butler. Butler’s actions and voting records were not aligning with constituents’ expectations,” Ponder explained. “In July of 2019, the historic courthouse was finally reopened allowing the public to enter through the regular doors instead of the basement. Butler voted against that as well as voting against allowing LTC holders to carry into county offices with the exception of courtrooms. More citizen requests came in for me to run, this time by the dozens.”

When the special meeting took place last week Ponder said “Map B was actually the first map, and we thought the only map. As testified by one of the speakers at the Wednesday, October 27 Redistricting Workshop, it seems Butler’s citizen appointee read from a sheet of paper, purportedly from Butler, the boundaries needed to draw me out of his precinct and into precinct 3. That is how the second map, Map A was created.”

Butler acknowledge the change in the Precinct 3 and 4 boundaries citing roads as the reason for the change.

“We need to recognize that Americans are equal before the law, and we should draw precincts based upon population and a need for services in an area,” Perry concluded.