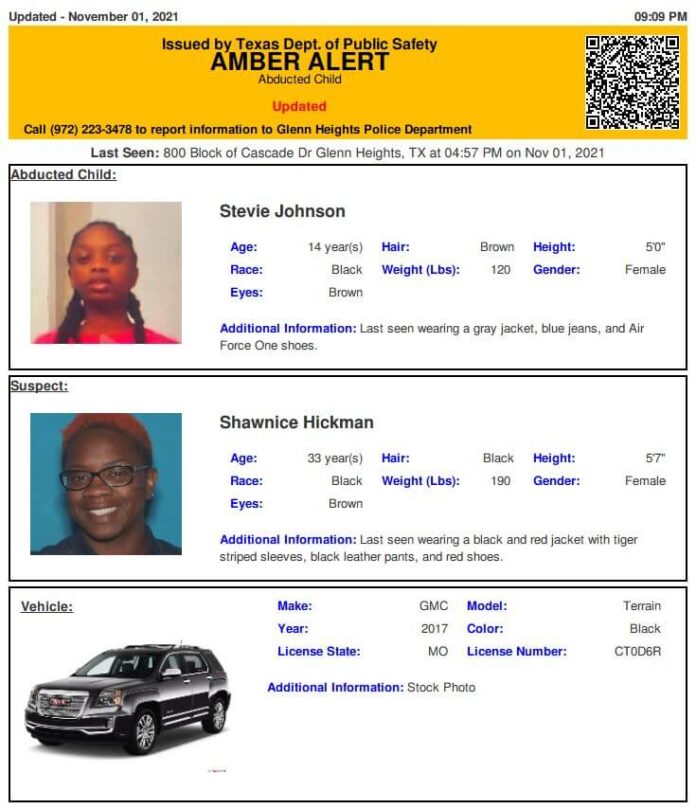 GLENN HEIGHTS – The City of Glenn Heights Police Department expect to successfully reunite 14-year-old resident Stevie Johnson with her family Saturday. Glenn Heights PD located the missing girl – who was the subject of Monday’s Texas Amber Alert – on Friday afternoon when officers in St. Louis County, Missouri stopped Johnson’s biological mother, 33-year-old Shawnice Hickman. Hickman was apprehended when officers from St. Louis County Special Response Unit observed her getting out of a vehicle that was parked around the corner from one of the residences they had under surveillance. Johnson emerged from the house and officers were able to recover her.

Glenn Heights Police contacted St. Louis County authorities after Johnson was abducted. GHPD suspected that Hickman would be traveling to the St. Louis area based on tips gathered during their investigation.

On Friday GHPD traveled to Missouri to bring Johnson back to Glenn Heights.

“The department was notified by St. Louis County authorities yesterday that the child who was the subject of our amber alert had been located safely in St. Louis County Missouri,” Clayton Shields, City of Glenn Heights Deputy Chief of Police said. “We would like to thank all the authorities that worked with us in the location of this child; the FBI, the St. Louis County Authorities, the Hopkins County and Hunt County Sheriff’s Office and the Texas Department of Public Safety all working together to help locate and recover this child safely. Our detectives worked diligently to continue to monitor and receive updates obtaining information that was valuable in the recovery of the child. The St. Louis County authorities did a great job locating the child and giving us a chance to reunite her with her family safely.”

Johnson was taken by her biological mother in a black SUV Monday afternoon after exiting a school bus in the 800 block of Cascade Lane in Glenn Heights.

Kidnapping Charges For Hickman & Her Sisters

Johnson’s mother was accompanied by her two sisters in the abduction who helped her take the 14-year-old across state lines. A Texas Amber Alert had been issued Monday and discontinued the following day.

On Friday both Hickman and her two sisters were in custody. Warrants were issued for Hickman and her sisters by the Glenn Heights Police Department on charges of kidnapping.

“This was great teamwork for the law enforcement community,” Shields concluded “We are also thankful to those who called us and provided tips and information that was valuable in assisting us with the positive resolution of this incident.”