DALLAS—North Texas was visibly rocked after a deadly downtown shooting claimed the lives of five Dallas police officers. Some residents saw it as a cultural uprising, others a political opportunity.

However, Pastor Rickie Rush of the Inspiring Body of Christ Church saw it as a call to action. In the aftermath of the tragedy, Rush saw a lack of preparedness to respond to events of this magnitude in our communities.

“People were asking questions like what can be done about violence in the City? How do you respond to incidents like that?” Rush recalled. “We can keep talking about this or we can do something about it. We can be proactive.”

Consequently, that desire to be proactive came in the form of the All Male Leadership Academy. First responders and community leaders did an outstanding job trying to regain a sense of normalcy after the July police shooting. At the same time, on the community and neighborhood level, there was still much to be done. Rush felt this was the responsibility of the men in those respective families and communities.

“The way to do that is to create a strong positive base of men – men who know how to respond in situations like this,” said Rush. “We are proactive men of god who are covering the community of God, our families and friends.”

According to information outlining the program, the lack of male leadership is often the crux of issues that plague society.

“Senseless murders, unmet economic needs, and a lack of knowledge and education are just a few of the ills that continue to deteriorate the very core of who men can and should become,” said Rush.

On December 30, 2016, the first class of 302 men completed the first level of training. This is by no means a paramilitary outfit, but a contingent of Dallas area men who are dedicated to positive lifestyles and taking an active leadership role in their communities. That leadership role is starting in their homes.

“We are constantly being positive in our congregation. We have 300 men in our church every Sunday covering our congregation. It can be something as simple as helping with ladies getting to their car and holding a door open.

For groups like this, Pastor Rush contends that the presence of male leadership is just as important as any reaction that might occur.

“It’s like buying a umbrella before it rains. Getting burglar bars on your house before a break in,” said Rush. “In essence, it’s an insurance policy.”

While the leadership program at IBOC is a lifetime commitment, each level consists of 15 classes spanning four months.

“Topics include suicide prevention, marriage, anxiety, singleness, depression, child rearing and how to be a strong man,” explained Rush. “They have to pass tests. It’s either all or nothing. Our motto is ‘Success is not expected. It is required.”

While the congregation at IBOC is mostly African American, the classes are not only for minority males. Moreover Rush explains the group is more about leadership than race.

“It has absolutely nothing to do with culture or race. So it’s not only about black men. Overall we want to train the males in our society.”

There were even some attendees who weren’t members of the IBOC congregation.

“Every guy wasn’t from even from IBOC,” said Rush. “However we wanted to teach them three things: How to follow their leaders, Support their pastor and how to serve the world.”

Classes were held on Sunday evenings. Sometimes topics were so intense that sessions would last to 1 or 2 a.m. in the morning.

Of 302 graduates there were all caliber and class of men. Owners of businesses, the unemployed, PhD’s and men who just got out of prison. Ages varied, the youngest was 10-years-old and the oldest was 88.

The program is spiritually-based says Rush, but challenges are still present.

“It’s very difficult to talk about how to not be aroused by women to a bunch of 16-year-olds who’s hormones are raging. They have access to smart phones so we checked phones. There were times we even took cell phones.”

“Curriculum success came from a place of simplicity,” affirmed the pastor.

“You just got to know how to reach them. Sometimes a 10-year-old would get lost during a subject like finances. But if we would give them $5 and tell them that if they bring it back in two weeks we would give them $10 they would understood the importance of saving immediately. ”

Pastor Rush had to confront some of his past when addressing certain subjects.

“This entire thing hit close to home for me. I always knew I had a special ministry for men. It was all about transformation. Because of some things that transpired in my life, it was tough for me. You have to be transparent with these guys. Sometimes it’s uncomfortable. This was not a fundraiser. The men paid nothing.”

As a matter of fact, all the participants received a black suit, tie, umbrella, special commemorative tie pin, folders and class supplies and sometimes meals. The Inspiring Body Of Christ Church covered all expenses.

Pastor Rush reminds residents that members of this elite group of men are no doubt highly visible in the community. Yet this doesn’t mean these individuals are perfect.

“By no means does this mean that these guys have it all together. There are some guys that are still battling addictions; getting caught up on child support. But the difference is they have a support system that they can fall back on,” said Rush. “Now there is a bond.”

During the graduation, Rush donned a tuxedo jacket, shirt and tie on top but a pair of ripped jeans at the bottom. I did it on purpose. I wanted people to see that there was something not right,” he said. “It’s important for people to realize that we will not stay torn. You know those favorite pair of jeans that we all own that are busted or torn. And they are comfortable. But like that pair of jeans, we must be mended.”

The next session of the All Male Leadership Academy at  Inspiring Body of Christ Chucrchis scheduled for Spring 2017. For more information call 972-572-4262. 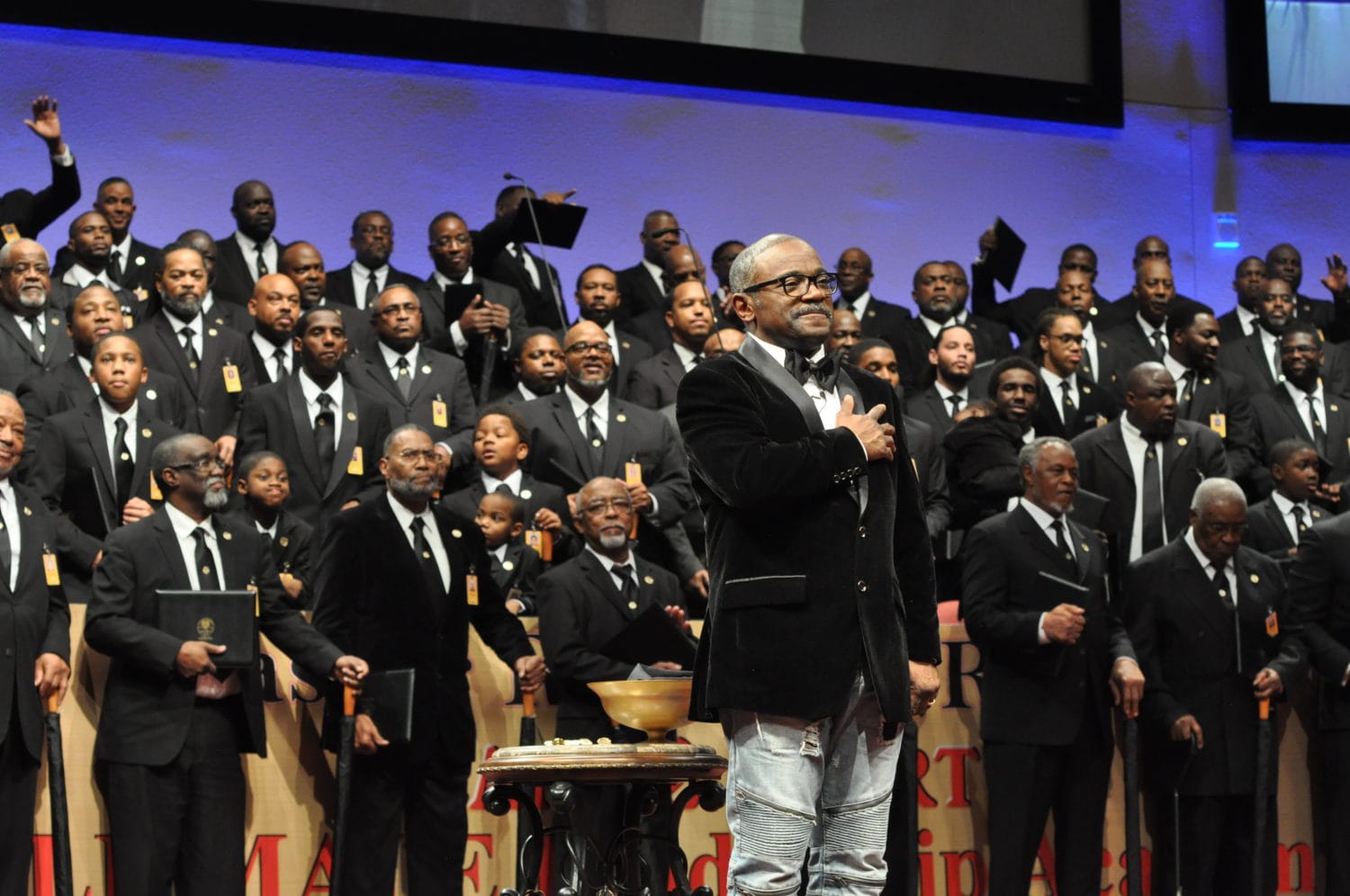