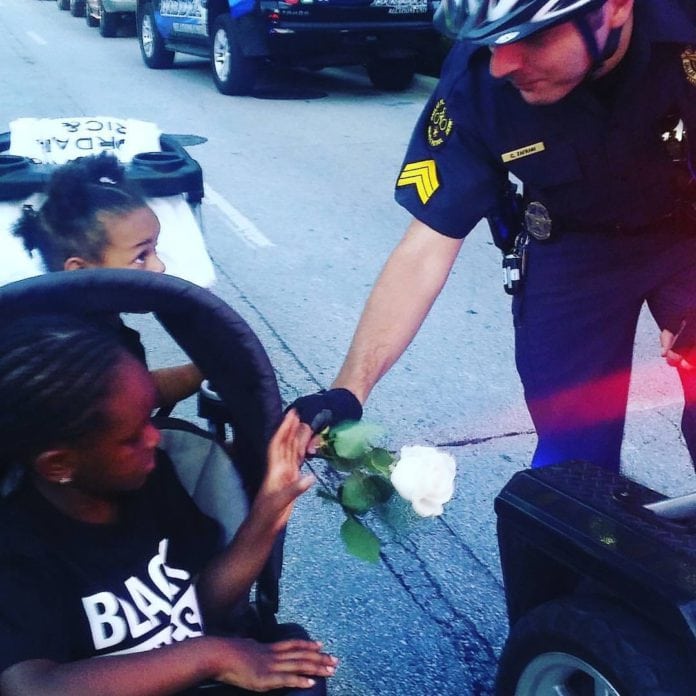 By Ebony N. Smith, In Her Own Words

After last Thursday I will forever be changed. Not just because of the shots fired but the random act of kindness that occurred shortly thereafter.

I was pushing a 100 plus pound stroller around the inner city of Dallas in hopes of showing my two daughters that people can and will come together to stand for what’s right.

My oldest Zoe began to talk to this Dallas police officer about his Segway. “Why do you have a scooter? Police officers don’t need scooters.” The kind police officer took the time to share some knowledge about his scooter with my 5-year-old. Shortly after their friendly conversation the police officer whisked away.

I pushed the stroller holding my most valuable cargo up Main Street a little further. As we began to approach the same awesome spirited police officer once again–he seemed to hiding something behind his back. As we began to pass him, he whipped out a white rose and like knight in blue armor he presented my 5-year-old with a white rose. Of course I took a picture of a beautiful act of kindness from a man in uniform. What better way to show my children all police officers are not corrupt. As a matter of fact most live and die to protect and serve those they will never know.

As we strolled off smiling from ear to ear. Well at least Zoe and myself. May my youngest daughter was really P.O.’ed because she didn’t get a flower. She cried to top of her lungs as I attempted to go make another circle of the downtown with the crowd of protesters once more. I stopped to try and comfort her, but as we all know that can be easier said than done with a 3-year-old.

At that point I decided to turn around and go back to Belo Gardens park where the protest started. I was sure everyone would end back in the spot we started to officially close out the protest.

We made back to the park with the crowd just 2 minutes behind us. As Zoe, Maya and a few other children rolled down grassy hills. I thought to myself this was a good idea and I could feel the love energy in the air.

Then all hell broke loose. Gunshots began to ring in the air. Really not sure what was going on I grabbed my two children and hid behind the hill. The hill they just played on became a shield from flying bullets. 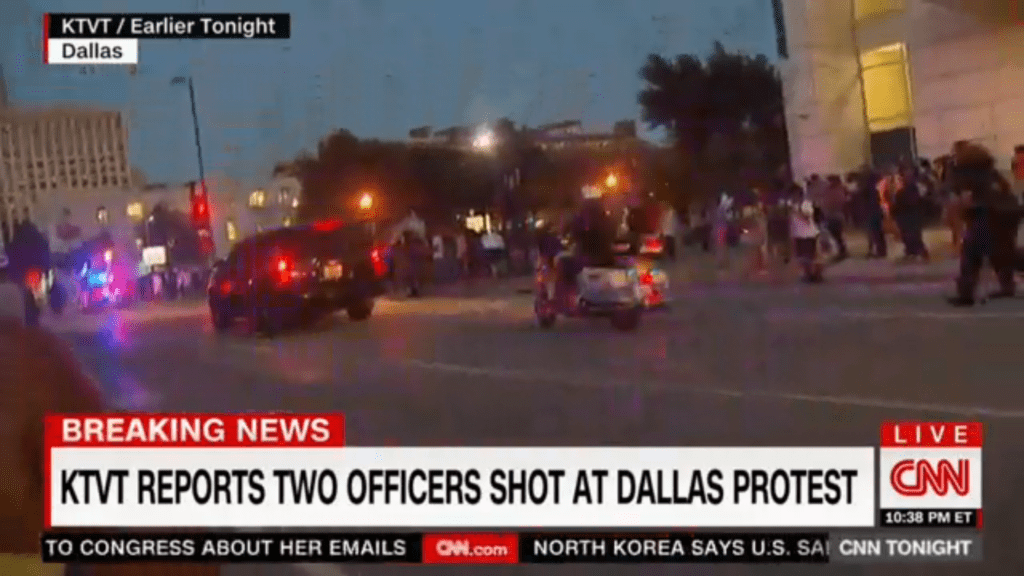 “Is that a gun mommy?” My 5-year-old asked me in tears. I told her don’t be scared, “God is in control”, hoping she didn’t see the fear on my own face. I did the only thing I could do, pray. My children and began to say the Lord’s Prayer as shots ensued.

As soon as, we said Amen the shots ceased and I felt a gentle tap on my shoulder. I looked up and it was a white couple who said, “Come up to my apartment I live right behind here. We will be safe there.”

Shaken to the core I grabbed my children and that heavy stroller and followed the woman to the apartment building lobby a few feet away. All around us people were running, screaming and crying.

I heard somewhere that when you pray angels appear. We where among two of the finest God had to offer. They gathered all of us from behind the hill. Another family with three children and young man who had be separated from his family. We discovered later he was the son of the woman civilian that was shot.

We made to the lobby of her apartment building where we were stopped by the door attendant. “Where are you going? Do you all live here?” The angel spoke, “I live here, these people need to take cover. We are going up to my apartment, these are my guests.”

We made our way up the elevator and entered an amazing home which had now become an ark of safety for us. We called our families and watched the news only to find out police officers and been killed.
Amidst this turmoil this woman and her friend made feel right at home.

She turned on cartoons for the little ones and feed them peanut butter crackers. She even put on anti-itch cream on Zoe because the grass we were forced to cower in had irritated her skin. She opened up her home, her space to complete strangers. I am forever grateful.

Despite of the madness going on below. Peace and love dwelled in her home. The coming together of souls happened in that space. Tears were wiped away, fear began to subside in that space.

God is real, people still do love and I and my children are living witnesses to this love.

I am forever changed by this love and more than grateful for His mercy and grace upon us.

All we need is love.