Home Commentary The Inexplicable Stairs – Chapel Of Our Lady Of Light

COMMENTARY—Albuquerque sits like an arid jewel on the fringe of the Sandia Mountains at the base of the Turquoise Trail. The city is one of diversity in terms of her people and in serving as a referee in a constant battle between the era of the contemporary and the haunts of the past.

The ancient Spanish capitol, Santa Fe, is about an hour’s drive north from Albuquerque. Today, it serves as the capitol of the State of New Mexico. Near the town square of old Santa Fe is a small church structure called the Chapel of Our Lady of Light, which was dedicated on April 25, 1878. The following is a story of that chapel, and a beautiful staircase that many believe was built by the master carpenter, St. Joseph, himself.

The Our Lady of the Light Chapel was built in the 1870s, fashioned after the Sainte-Chapelle Chapel in Paris. The purpose of the chapel was to provide a place to worship for the Loretta Academy, which was operated by the Sisters of Loretto. The purpose of the academy was to educate young girls in scholastics and music, and to develop spiritual growth.

With the encouragement of Bishop John Lamy, the Sisters of Loretto moved from their main house in Kentucky in 1852 to Santa Fe. For 20 years, the sisters struggled to bring an education as well as spiritual growth to the young women of New Mexico. If they were to continue to grow, they would need to build a chapel for their order to use for worship services.

Bishop Lamy hired a young French architect to draw plans for building the chapel, and to oversee the building. Stonemasons were brought from France and Italy to build the beautiful chapel. After five years, and a plot of intrigue involving the young architect and the Bishop’s niece, the chapel was finally completed. At least, they thought it was complete.

Upon inspection, Mother Magdalen and the workers discovered the chapel had been completed perfectly, but there was no way to ascend to the choir loft. There were no stairs, inside or outside that led to the loft. In checking the building plans, there was no mention of how to build the stairway or where it should go. A jealous husband had killed the architect earlier, so the plans for a stairwell must have died with him.

Carpenters from throughout the region were invited to look at the chapel, and asked to decide the best way to build the stairwell. All indicated it would be impossible unless the chapel were redone or the inside beauty of the chapel was altered. The sisters decided to pray a novena to the Master Carpenter himself, St. Joseph. On the ninth day of the novena, a small, gray- haired man appeared, with a donkey carrying carpenter’s tools. He stated he would like to have permission to build the stairwell, which the sisters quickly granted. He asked for a couple of large washtubs, and to be left alone to complete the task.

Over the next few months this strange man would erect a piece of work that many have considered a miracle. Using only a hammer, a saw and a T-square, he built a stairwell that makes two complete 360-degree turns. There are no supporting poles up the center. This means the stairwell hangs there with no support. The entire weight is on the base. No nails were used, only wooden pegs. The stairwell was built without a railing, but one would be added later. There are 33 steps that comprise the 22 feet of the structure.

One of the most baffling things about the staircase is the perfection of the curves of the stringers. The wood is spliced along the sides of the stringers with nine splices on the outside and seven on the inside. Each piece is perfectly curved. The kind of wood used cannot be identified, yet experts say it is definitely not indigenous to the region.

Upon completion of the stairway, the carpenter disappeared without notice, and received no compensation for the task. There are no records from the local lumberyard for purchases of wood or other building materials.

Some of the sisters believed the carpenter was the embodiment of Saint Joseph the Carpenter. No one ever saw him eat or drink anything, and where he slept was also a mystery. Some say he never slept.

On my recent trip to New Mexico, I visited the Loretto Chapel and saw the “mysterious stairway.” It appeared suspended in space, standing against the sands of time. I don’t know if this carpenter was an angel, ghost, Saint Joseph or mortal man. But whatever built the stairway was either divine or divinely inspired. Whomever, or whatever it was that disappeared into the darkness of the night, after bringing such an abundance of light into the world, was definitely blessed. Those of us who may not believe in a Higher Power will be held speechless when trying to understand how mortality could build such a heavenly edifice.

Personally, I would like to believe that the carpenter is still out there somewhere, waiting to be called upon to fulfill a specific task. I know he will come if asked, and will complete another miracle that can change the world into a more beautiful and peaceful place to live. 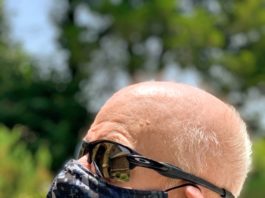 Don’t Throw Away Those Masks Just Yet 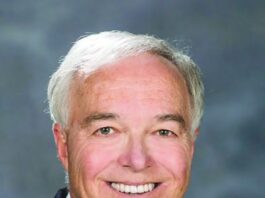