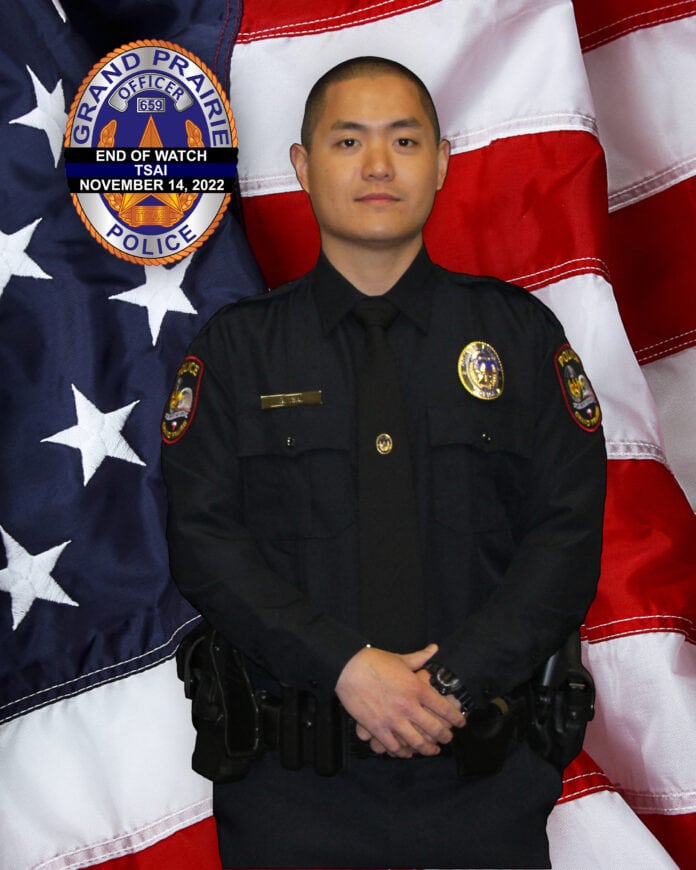 The Grand Prairie Police Department is mourning the loss of one of our officers who died in the line of duty. It is with heavy hearts that we report Officer Brandon Paul Tsai passed away after being involved in a traffic collision. At around 10:45 p.m. on Monday, November 14, 2022, Officer Tsai was near the intersection of SW 3rd and Pioneer Parkway when he located a vehicle displaying a fictitious paper license plate. Officer Tsai attempted to stop the vehicle which immediately fled.

During the pursuit, Officer Tsai lost control of his squad car causing it to strike a light pole. Officer Tsai was transported by Grand Prairie Fire Department Medics to Methodist Dallas Medical Center where he succumbed to his injuries. Officer Brandon Tsai was 32‐years‐old and had been with the Grand Prairie Police Department since January 2022. Prior to his hiring at GPPD, he served five years with the Los Angeles Police Department in California. He was a loving friend, a trusted colleague and an outstanding officer whose passion was providing service to the public. The crash is under investigation and there is no additional information currently available.

Statement from the city of Grand Prairie: As we mourn the loss of Grand Prairie Police Officer Brandon Tsai, who died in the line of duty Nov. 14, we have made the decision to cancel the upcoming Cyclin’ with Mayor Prairie Lights Ride, scheduled for Monday, November 21.

Our thoughts and prayers are with Officer Tsai’s family and friends, and GPPD during this sorrowful, difficult time.

Thank you for understanding.

Our thoughts and prayers are with the family of Officer Tsai and his GPPD colleagues.