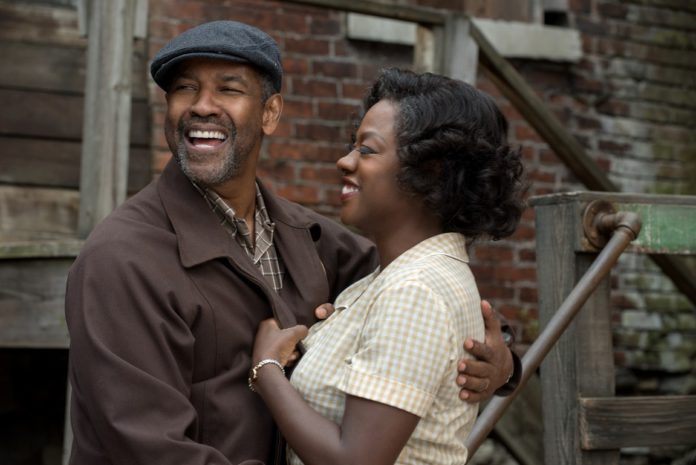 Playwright August Wilson’s Pulitzer Prize-winning play, Fences, has been moved seamlessly to the big screen. The cinematic version of Fences is every bit as powerful as the award-winning play. The film version is a labor of love for Denzel Washington, who plans to eventually bring all of Wilson’s works to the cinema.

Washington directed and stars in the film as frustrated black garbage collector Troy Maxson. The play and film are set in the 1950’s in Pittsburgh, PA. Maxson is very bitter over not being able to fulfill his potential as a baseball player. He blames the color barrier for not allowing him to advance beyond the Negro Leagues. He’s especially resentful that it was only a short time later that barrier would be broken by Jackie Robinson.

Washington is wonderful in the title role, which he played in the 2010 revival of the play on Broadway. He and his co-star, Viola Davis, both won Tony awards for their Broadway roles. No doubt Hollywood’s Academy Award voters will also pay close attention to both actors for their film work.

This reviewer was especially enthralled by the poignant performance of Ms. Davis. She breaks our hearts as Rose, a good wife and mother who endures the pain of loving a man who just can’t treat her right.

Everyone in this ensemble cast is great. Stephen Henderson plays Maxson’s co-worker, neighbor, and longtime best friend. Jovan Adepo is Cory, Maxson and Rose’s teenaged son. While Cory has become a star football player on his high school team, his dad seems jealous of his son’s abilities. He makes Cory take an after-school job that could possibly keep him from winning a college football scholarship.

Russell Hornsby is Lyons, Maxson’s older son and Rose’s step son. Lyons is a professional musician, but his dad downplays his abilities. He even refuses to go hear him play at a neighborhood venue. As Fences unfolds, it becomes harder and harder to sympathize with this man who treats his family and friends so badly.

But Mykelti Williamson steals our hearts as nerve-damaged Gabriel, Maxson’s brother who was badly injured in the war. His joyful enthusiasm and naïve pronouncements are in direct contrast to his brother’s uncontrollable bursts of temper.

“Fences” is a Paramount Pictures release, and opened wide December 25. It runs 133 minutes and is rated PG-13 for thematic elements, language and suggestive references.