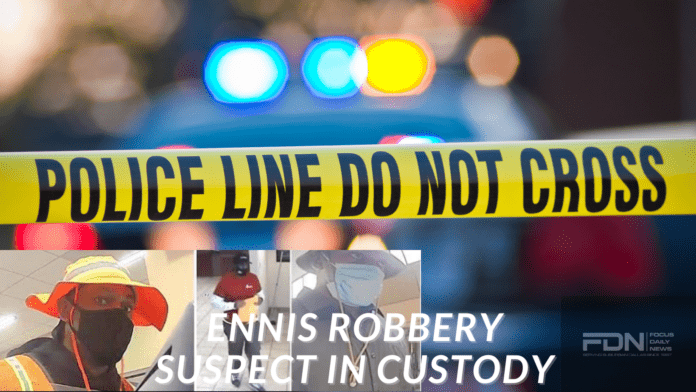 On April 29, 2021 at approximately 1:25 pm the Ennis Police Department responded to a robbery at Ennis State Bank 815 W. Ennis Ave. in Ennis, Ellis County, Texas. Officers from the patrol division and CID responded to the location. Special Agents from the Dallas field office of the FBI also responded.

The suspect reportedly handed the bank teller a note that read, “THIS IS A ROBBERY. 30K. DON’T BE A HERO.” He told the teller to place cash into a folder, then fled the scene.

The investigation revealed that the suspect entered and left bank property on foot towards a grocery store. Video from area businesses and responding patrol vehicles was instrumental in helping to identify the suspect and his vehicle, a silver Dodge Challenger.

In the early morning hours of May 6, 2021 the suspect identified as Michael W. Wilson 34 of Dallas, Texas was taken into custody by special agents of the FBI and officers from the Dallas Police Department.

Suspected In Other Bank Robberies In North Texas

Wilson is a suspect in a number of other bank robberies in the north Texas area. The incidents were repeatedly caught on surveillance camera.

During a robbery at a bank in Dallas on Feb. 9, Mr. Wilson allegedly flashed a demand note that read, “This is a robbery. I have a gun.” After grabbing several thousand dollars from the frightened teller, he fled with the money and demand note — but left a deposit slip on the counter.

Investigators lifted a latent fingerprint off of the slip. They ran the print through a police department database, but failed to turn up a match.

Wilson is slated to make his initial appearance in federal court today.

If convicted, he faces up to 20 years in federal prison.