Focus Features new take on Jane Austen’s romantic comedy, “Emma,” is entertaining. Although it’s not the most faithful adaptation we’ve seen, this stylish film offers a delightful escape from wintry weather. The English countryside never looked more appealing than it does here. While the 19th century period costumes are absolutely eye-popping. The fashionable gents are almost as splendidly turned out as the ladies.

Autumn de Wilde directs the film, and it’s adapted for the screen by Eleanor Catton. “Emma” opens in a limited run in Dallas-Fort Worth Friday, and is rated PG for “brief partial nudity.”

Anna Taylor Joy is fun to watch as Emma Woodhouse. The young (not quite 21) heiress is bored to tears by her small town environment and her fawning suitors. Rich, beautiful, and headstrong, she has been spoiled quite rotten by her doting father (Bill Nighy).

With too much time on her hands and nothing exciting to do, Emma amuses herself by meddling in the romantic affairs of others. While she vehemently insists that romance and marriage are not for her, she loves trying to match others. Her newest project is Harriet Smith (Mia Goth). Harriet is a young woman who doesn’t know her parentage, but obviously doesn’t belong to Emma’s aristocratic social class.

Emma first tries to match Harriet with one of her own more ardent suitors, the local preacher (Josh O’Connor). She reminds us of the head mean girl in a modern teen comedy, bullying poor Harriet into turning down a marriage offer by a farmer who loves her. When the preacher doesn’t offer Harriet his hand, Emma soon puts forth another, even more unsuitable candidate.

George Knightley (Johnny Flynn) is Emma’s longtime friend from a neighboring estate. George is handsome, kind, and every bit as wealthy as she is. He’s her most trusted confidante, even though she seldom heeds his good advice. For those of us who grew up devouring Janet Austen’s books, we know that George is the perfect match for Emma. Whether she knows it or not.

There are times when you just want to shake Emma. She doesn’t seem to know when to stop meddling, even with often disastrous results. Jane Austen once told interviewers that Emma was probably her least likeable heroine. Happily, Emma finally comes to her senses in time for a happy ending for all concerned. Even herself! 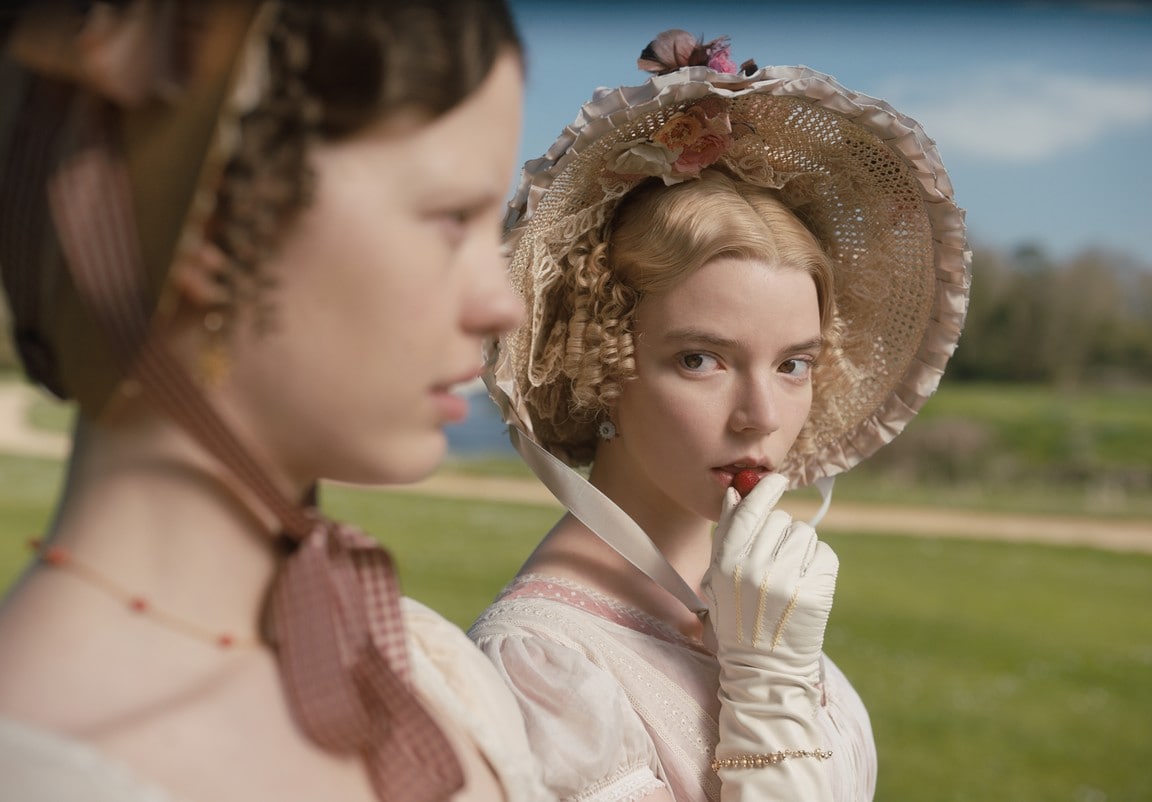