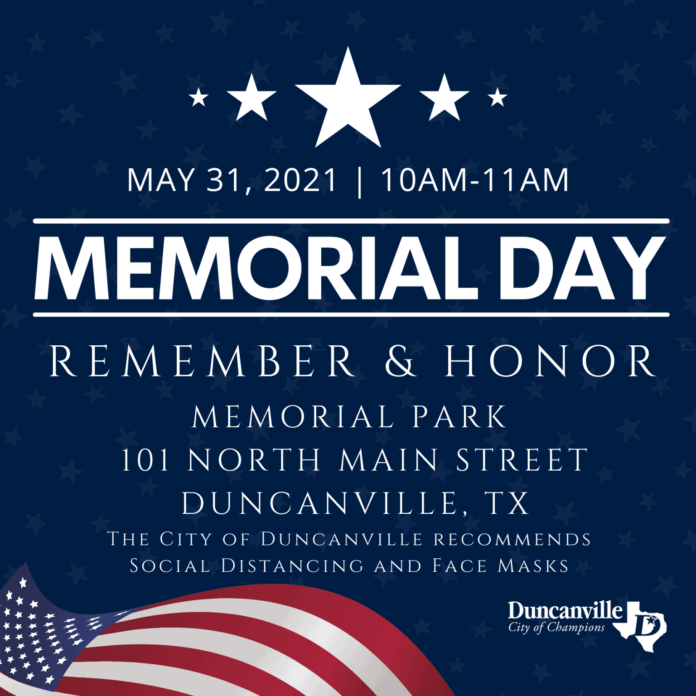 The City of Duncanville will once again hold their special Memorial Day commemoration ceremony on May 31. The Memorial Day program was cancelled last year due to Covid-19 restrictions. Memorial Day is a U.S. federal holiday observed on the last Monday in May, honoring all Americans who died while serving in military. The program will be held from 10-11 a.m. at 101 North Main Street in Duncanville.

The City of Duncanville, in partnership with American Legion Post 81 and Veterans of Foreign Wars Post 7843, invites everyone to be a part of the Memorial Day Ceremony. The program starts at 10 a.m. May 31 in Memorial Park. Road closures on the Santa Fe/Main Street slip will begin at 8 a.m., and Main Street will be closed at 9 a.m.

The Ceremonial Lowering of the Flag occurs at 10 a.m., conducted by members of VFW Post 7843. Posting of the Colors follows, conducted by the Duncanville Police Color Guard. Opening remarks will be made by Ricky L. Williams, Sr., Commander VFW Post 7843. An invocation by City Councilman Place 1 Joe Veracruz will be followed by the singing of the National Anthem by Jennifer Otey.

The Pledge of Allegiance to the flag is led by Troop 1 Pack 1 and Venture Crew 3 of Duncanville. Honoring the Branch of Service Flags is led by Ricky L. Williams Sr. Commander VFW Post 7843.
Kelvin Moffit, VFW Post 7843, will discuss the meaning behind the POW/MIA Memorabilia on display at the event. Michael Buchanan, U.S. Army Ret. OIF/OEF Combat Veteran, is the guest speaker for the Memorial Day program.

Charles Taylor, Chaplain, VFW Post 7843, will conduct the Roll Call Salute, with Duncanville HS students Anry Ramirez and Joshua Retiz playing TAPS. The closing prayer will be given by Councilman Veracruz, and closing remarks will be made by VFW Post 7843 Commander Williams.

Due to COVID-19, no reception will be held after the event. The City of Duncanville recommends social distancing and the use of face masks at the event.