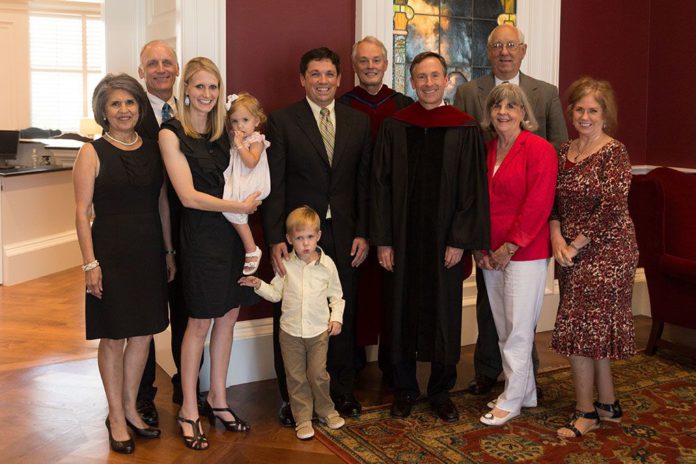 DALLAS—Dallas Baptist University awarded an honorary Doctor of Humanities degree to Mitch Bennett during the University’s Spring Commencement ceremony, held on May 13, 2016.

A native of McGregor, Bennett currently serves as Director of Gift Accounting and Assistant to the Chancellor at DBU. He received his bachelor’s degree in business administration from Baylor University while he worked as a student worker under Dr. Gary Cook, who was a member of the Baylor administration at the time. When Dr. Cook moved to DBU as president in 1988, Bennett joined him. It was then that he grew to love the ministry of Christian higher education, experiencing first-hand the impact that caring Christian faculty and staff members can have in the lives of students.

Since then, Mitch Bennett has faithfully and selflessly served the university for 28 years. He is well known and widely loved among the DBU family and is a man of character and humility. Those who know him best say there is no one who better embodies the mission of DBU, and in 2005 he was recognized for such efforts in being named the DBU Staff Member of the Year. While serving at DBU, Bennett also earned both a Master of Business Administration degree and a Master of Education in Higher Education degree.

Bennett currently resides both in Grand Prairie and his hometown of McGregor. He is an active member of First Baptist Church McGregor, where he serves as a deacon and usher. He’s also been a member of various teams and committees, including the Evangelism Team, Pastor Search Committee, Senior Adult Prayer Breakfast, Vacation Bible School, and chair of the church’s 150th Anniversary Celebration. In addition, he volunteers at the community’s food pantry.