The mural honors firefighters, paramedics, police and other emergency workers in the community. Kristen Jackson, Executive Director of Color Me Empowered, brought the artistic team together for the project. The mural was designed and painted by Dallas artist Daniel “TonySlowMo” Skelton. Local teenagers Maklia Slater and Elizabeth Cruz provided painting assistance for the mural.

Color Me Empowered is a nonprofit that works with students to create public art projects in the Dallas area. Part of the nonprofit organization’s mission is to help teens realize their power to change their own community. With the involvement of the high school students in creating the mural, Jackson said “I think in a lot of ways it represents a feeling of hope.”

One of the nonprofit’s board members connected Jackson with Crescent Medical Center’s Assia Mahmood, who coordinated with Jackson on the mural project.

Mahmood said they decided to create a mural that shows appreciation for public safety workers, “… So they know when they come here that we thank them for what they do.”

The murals are on the side of the hospital’s ambulance bay, outside the emergency entrance. 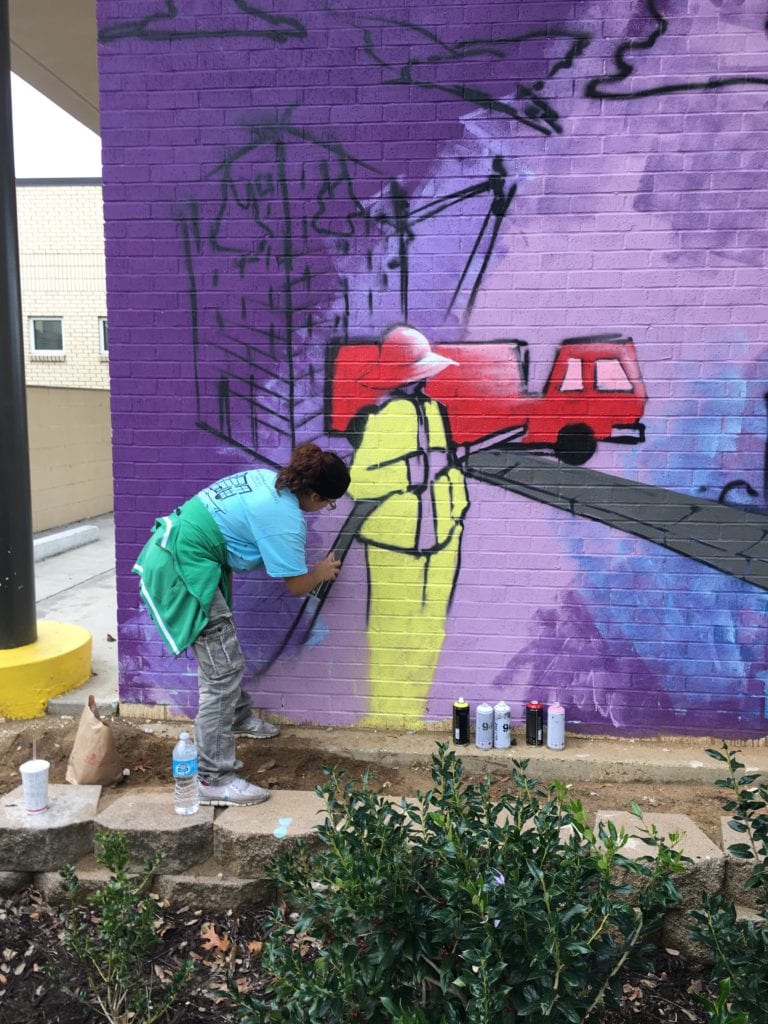 Artist “TonySlowMo” Skelton says, “I’ve been an artist my whole life, and painting professionally about 25 years. I’ve been working with Color Me Empowered for about five years now, beginning with teaching graffiti in schools in South Dallas, which was an amazing experience.”

“The next step in my professional career is releasing my official album called “GRAMY.” I am a music producer as well as a visual artist. My artwork can be seen all over Dallas, in random places, but I will be putting all the pictures in a gallery on my web site coming soon (TonySlowmo.com).”

Skelton said he appreciated the assistance from the Lancaster students. “Both Makalia and Elizabeth were naturals at painting with a spray can and picked it up very fast. Although I showed them a few tips, they were very independent and helped me tremendously. It was nice to have them on this project.”

“It was a great honor to paint a mural to honor the first responders,” Skelton said. “Their hard work and sacrifice often go unnoticed so it was a nice spotlight for them. All of the first responders at the opening seemed genuinely touched by the mural. As a graffiti artist, that’s all I want, to affect people and make them think.”