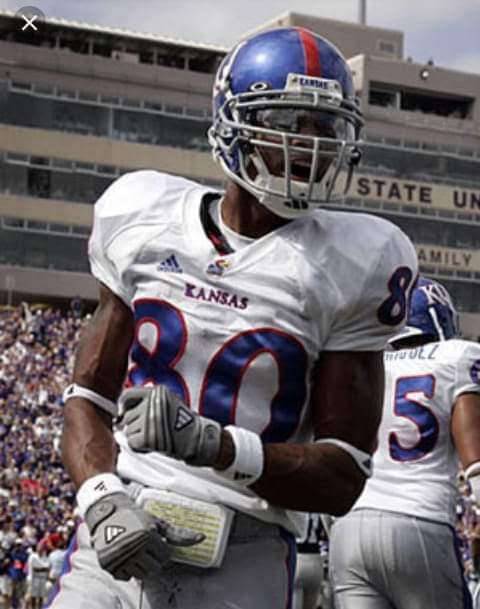 The Need For a Plan B

(CEDAR HILL, TEXAS) Dezmon Briscoe remembers the emotional toll that he felt in the summer of 2014.

Briscoe, a Cedar Hill High School Class of 2007 Graduate, was about to enter his fifth season as a wide receiver in the National Football League, but a shoulder injury the previous year hampered his chances of making the roster with the hometown Dallas Cowboys.

As he approached his 25th birthday, Briscoe thought about the sport he had loved since age 7. He’d dedicated everything he had into the game of football for the better part of two decades.

There was only question that remained that August – ‘What’s next?’

And there wasn’t a straightforward answer.

“It was tough,” Briscoe said. “People were saying they knew what was going to happen, but I never had a situation where I lost it all and had to build it back up. I didn’t have a ‘Plan B’ at the time, and you need to have a ‘Plan B’.”

Briscoe is very honest about the fact that he experienced depression during that time.
He was able to overcome it, thanks to help from friends and family.

At 31 years old now, Briscoe is living in Denton County and finishing his
Communications degree at the University of Kansas. He is a personal trainer, a motivational speaker and the proud father of a daughter and a son.

He’s also an advocate of mental and emotional health for athletes.

Briscoe emphasizes the importance of speaking to a psychologist or psychiatrist, if a person is in need of help.

“A lot of our efforts are about encouraging people to open up and seek help,” Briscoe said. “A lot of people have a fear of being judged, but it’s important to
discuss how you’re feeling. Just talking to people helped take a lot of weight
off my shoulders.”

Briscoe will continue to emphasize the importance of mental health when he enters the coaching profession, upon completion of his college degree next year.

Briscoe moved to Cedar Hill from the Pleasant Grove neighborhood in Dallas, in the summer of 2003, just in time for his freshman year at Cedar Hill High School.

It was also the beginning of the Joey McGuire Era at Cedar Hill High School. Current Cedar Hill head coach Carlos Lynn was an assistant coach when Briscoe joined the program that summer.

“They helped me out so much and made sure may grades were good,” Briscoe said. “I didn’t have a father figure. Both Coach McGuire and Coach Lynn were father figures. They demanded greatness.”

By Briscoe’s senior year, the Longhorns were one of the most formidable programs in the state, and he caught 37 passes for 708 yards and 11 touchdowns that season.

“Dezmon was one of the best receivers to ever play for Cedar Hill,” Lynn said. “He was very humble and very coachable.”

He helped the program make history with its first-ever state championship in 2006, with a rout of Cypress Falls in the UIL State Championship Game in San Antonio.

“I knew going into our senior year that we had a team that was talented, but undefeated talented?,” Briscoe said. “I didn’t know. That was one of the best years of my life. Everybody gelled, and we’ll never be forgotten for that season. Not only were we close on the field, we had team chemistry on the field and wanted to play for each other.”

If 2006 was a special year for Briscoe, the following year would be remarkable as well – on an even larger stage.

He was recruited by several NCAA Division I schools, but signed with the University of Kansas after being recruited by Jayhawks wide receivers coach Tim Beck, who’s now the offensive coordinator at North Carolina State.

Kansas was known for its basketball dynasty, and football was often an afterthought at the university. Facing powerhouses like Texas, Nebraska and Oklahoma on a regular basis didn’t help the Jayhawks’ cause.

But things were changing quickly for the Kansas Football Program, and Briscoe played as a true freshman in 2007, earning Honorable Mention All-American Honors after 43 receptions for 496 yards and seven touchdowns.

The Jayhawks had a storybook season. Entering the Saturday after Thanksgiving, Kansas and archrival Missouri were the top two teams in the country playing before a sold-out crowd at Arrowhead Stadium in Kansas City.

Missouri won the “Border War” game, but somehow Kansas managed to get the better bowl game – an invitation to the Orange Bowl in Miami.

He credited Kansas receivers coach David Beaty, a Garland native, with helping him develop into a top notch receiver.

“He helped me become a better receiver and a better man,” Briscoe said of Beaty, who served as KU’s head coach from 2015-2018. “He would always say ‘see the ball to the touch’.”

Although Kansas hasn’t come close to that type of success over the past dozen years, Briscoe and about 30-to-40 of his teammates return to Lawrence each year for the annual Spring Game.

Briscoe made the decision to forgo his senior year and declare his eligibility for the 2010 NFL Draft. He became the first Cedar Hill graduate ever selected in the NFL Draft when the Cincinnati Bengals selected him in the sixth round.

It was an amazing accomplishment when considering that Briscoe was ranked the 126th best wide receiver in the nation, by 247sports.com, in 2007.

Just three years later, he was one of just 21 receivers selected in the NFL Draft.

Briscoe was drafted by the Bengals, who had won the AFC North Championship the previous season. They had a strong receiving corps, including Terrell Owens and Chad Ochocinco – two guys that Briscoe had followed since he was in elementary school.

The Bengals offered Briscoe a chance to be on the practice squad, but instead he went to Tampa Bay where he had a chance to play for the active roster.

That took patience as Briscoe signed with the team in September and was activated after Thanksgiving. He made an immediate impact, catching a touchdown pass against the defending Super Bowl Champion New Orleans Saints.

The following year was his best as a professional, catching a career-best 35 passes for 387 yards and two touchdowns. The head coach in Tampa Bay was Raheem Morris, who was recently named interim head coach of the Atlanta Falcons.

Briscoe’s time in Tampa Bay led to an opportunity in Washington where two-time Super Bowl Champion coach Mike Shanahan was the head coach.

In his first year with Washington, the franchise went 10-6 (and won the NFC East) with rookie quarterback Robert Griffin III, a fellow Texas native who had won the Heisman Trophy at Baylor University the previous year.

The elder Shanahan told Briscoe that he reminded him of the legendary Jerry Rice, whom he coached with the San Francisco 49ers. And he assured Briscoe that as long as he was the head coach, the Cedar Hill native would have a place on the roster.

“Mike Shanahan would say ‘you’re not the fastest guy on the team, but you do
everything at the same speed,” Briscoe said.

Washington struggled in 2013, and the franchise replaced Shanahan with Jay Gruden. The coaching change coupled with Briscoe’s shoulder injury, signaled the end of his tenure in Washington.

Briscoe returned to Dallas before the Cowboys began training in Frisco, so he had a chance to briefly practice where his childhood heroes Troy Aikman, Emmitt Smith and Michael Irvin had almost 20 years earlier.

Briscoe thoroughly enjoyed his experience at Kansas, but he wanted to complete it by finishing his degree.

He contacted the University, knowing that his scholarship had expired many years earlier.

That is why he was pleasantly surprised when they offered to pay for him to complete his Communications degree.

Initially, he made the seven hour drive north to Lawrence, but the Pandemic struck, so now he’s taking online classes.

“I really understand the importance of finishing my education,” Briscoe said.

Many of Briscoe’s former teammates are in the coaching profession, and he’s confident he can make an impact as a coach, soon after he completes his degree.

Although he’ll never rule out coaching at the college or professional level, he would like to start in the high school ranks.

“I would get the chance to be around my kids a lot more,” Briscoe said.