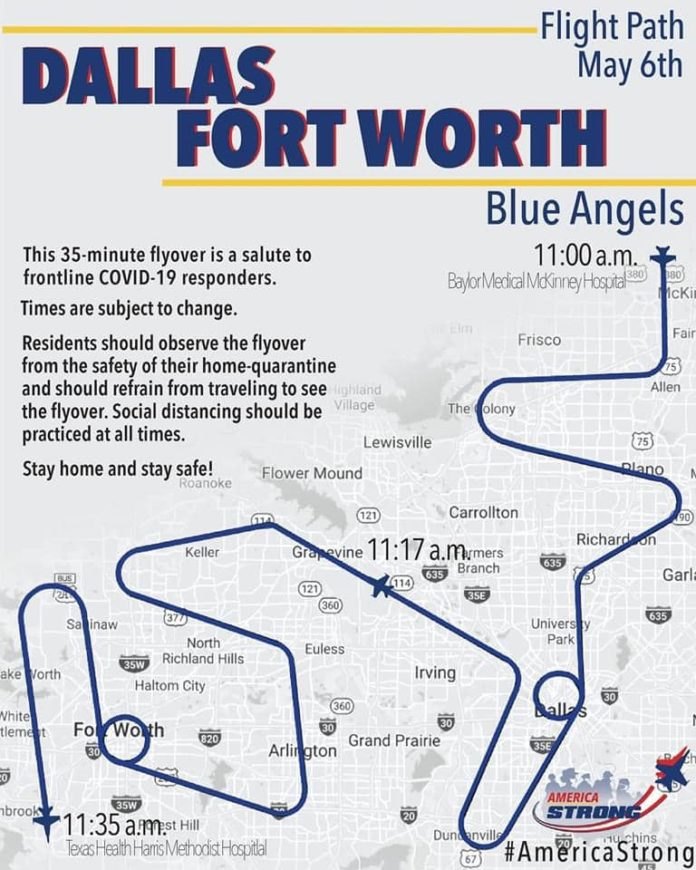 DESOTO – It is all about showing American solidarity.

With that in mind, the U.S. Navy Flight Demonstration Squadron, the Blue Angels, will be flying over the Dallas/Fort Worth area tomorrow.

The flyover by the Blue Angels is a way to show the appreciation the state has for its doctors, nurses, first responders and essential workers on the frontlines as the COVID-19 pandemic is being fought.

Texas Governor Greg Abbott said in a Twitter post today “this is a powerful symbol of Americans coming together during this unprecedented time.

Scheduled to begin the flyover at 11 a.m., residents in District 109 and the Best Southwest cities can expect the show within the 35-minute timeframe thereafter.

According to the Bell Fort Worth Alliance Air Show, the company helped put the event together, the exact route and times are not set in stone. It is being reported to begin in Downtown Dallas. The Blue Angels will circle downtown Dallas, head south toward Joe Pool Lake with an overhead in DeSoto, Grand Prairie, Irving, DFW Airport, Keller and Arlington. From there it is expected they will circle downtown Fort Worth and end in Southwest Fort Worth.

“We appreciate the special flyover in DFW tomorrow by the Blue Angels in honor of our frontline COVID-19 responders and workers,” said Texas State representative Carl Sherman (District 109). “Dallas/Fort Worth, Texas and the nation will stand strong during this time and the Blue Angels’ show of solidarity is one more way to let the world know America is a nation with the will to remain strong and overcome any obstacles.”

Blue Angels are a group of demonstration pilots. They fly McDonnell-Douglas F/A-18 Hornets and are often in daringly close formation. They last flew over the area in October at the Bell Fort Worth Alliance Air Show.

Please remember if you are viewing the flyover in a park or public area to maintain social distancing of at least six feet.