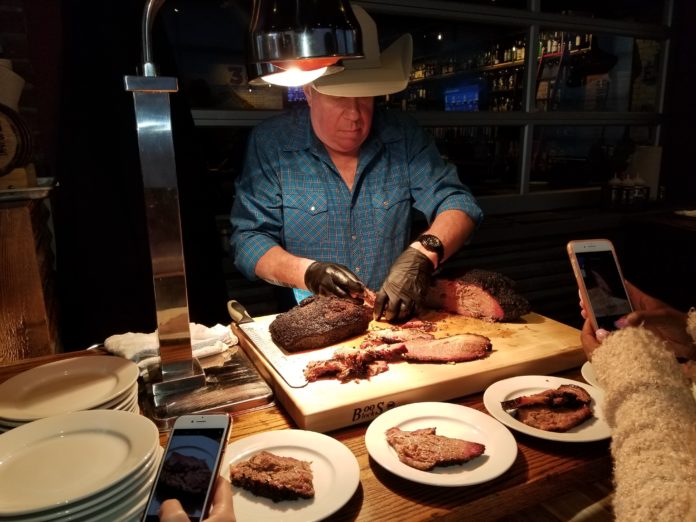 My ever-obliging husband, who never passes up a chance to chow down on authentic Texas-style BBQ, was eager to go with me to try a new place last week. We were invited to sample the food at 3 Stacks Smoke & Tap House in Frisco. While I’m not quite the smoked meat lover he is, I was quickly won over by the exceptional food at 3 Stacks.

While 3 Stacks is surprisingly upscale for a smokehouse, the meat’s still the primary reason to be there. They feature the best cuts of USDA Prime Brisket, smoked to perfection by Pitmaster Bryan Shanahan. The flavorful brisket and St. Louis ribs simply melted in your mouth. 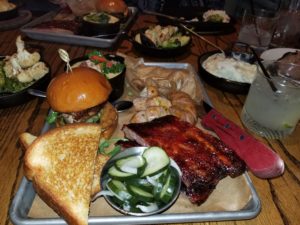 Other meats sampled were smoked turkey and a delightful twist on a BLT: house smoked pork belly, fried green tomato, greens and BBQ crema. Their shrimp and grits were also delicious. Way too much food, but it seemed impossible to stop since everything we tried was so good.

“Save room for dessert,” Chef Rukes said. “No way,” we replied, already stuffed to the gills. But the waiters brought them anyway. Peach bread pudding made with donuts, and an incredibly yummy Banana Cream Brulee.

How good was it? Well, Chef Rukes’ combo banana pudding and cream brulee was so good, two grown men at our table (whose names will go unmentioned) wheedled the staff into sending them home with a second helping. 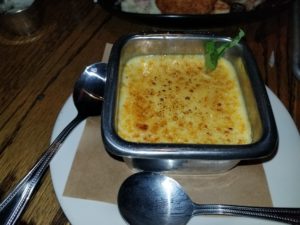 Housed in a rambling ranch-style building on Preston Road, 3Stacks is partially hidden behind the Hooters restaurant that fronts on Preston. The new restaurant is named for the three smoke stacks on top of the building; just head for those and you’ll find plenty of parking.

Inside the doors, you will be greeted by some of the friendliest hostesses and waiters in the southwest. You’ll also know from the aromas generated by Pitmaster Shanahan’s smoked meats that you are in for one heckuva good time!

Their prices are very affordable. Plates with 1/2 lb. of brisket were only $9 and a half rack of ribs was $14. You’ll also find craft cocktails and a large selection of craft beers from all around the Lone Star State at 3 Stacks. Located at 4226 Preston Road, phone 469-287-9035, 3stacksbbq.com.