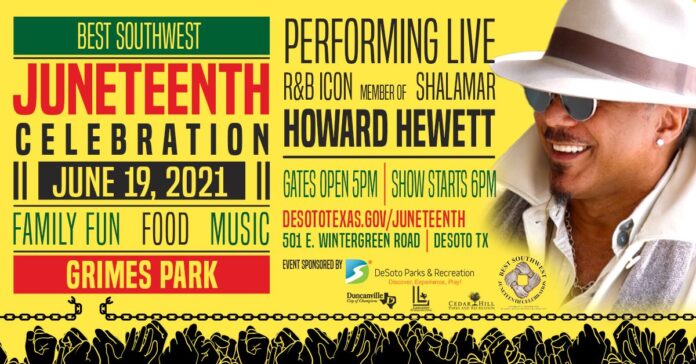 DESOTO – Since 2004 the Best Southwest cities of DeSoto, Duncanville, Cedar Hill and Lancaster have been working together to bring residents projects that benefit Southern Dallas County. It was at that time these cities joined together to coordinate a history making event co-sponsoring a first-ever Best Southwest Juneteenth Celebration.

The event rotates to each city every year. This year the host city is DeSoto.

DeSoto Mayor Rachel Proctor said, “DeSoto is honored to host this year’s celebration of Juneteenth at Grimes Park along with our partners, the Cities of Cedar Hill, Duncanville, and Lancaster. In addition to the celebration of freedom for all and of the proud African-American heritage of so many of our residents, this festival brings together our four great cities which have overcome many great challenges during the Coronavirus Pandemic, so it gives us even more reason to reflect, give thanks, and celebrate this Juneteenth.”

State Representative Carl Sherman, District 109, who is a former mayor of DeSoto and whose district includes the City of DeSoto, Cedar Hill and Lancaster said of Juneteenth, “This week’s Juneteenth holiday is so important and should be recognized by all Texans. Not just as an added holiday that employees can choose to recognize, but as a time to remember the heritage and culture that this day represents.”

The community is urged to come and enjoy the family-friendly event on Saturday, June 19 from 6 to 10 p.m. (gates open at 5:00 p.m.) at Grimes Park, 501 E. Wintergreen Road, DeSoto. Bring your lawn chairs or blankets for a place to sit.

As in years past the Best Southwest Juneteenth Celebration is expected to draw a good crowd and rightly so with R&B legend Howard Hewett known from his Shalamar days  headlining the evening’s free concert.

Also on stage will include Go-Go music from Shawn Martin, Blues Singer Phat Daddy, an opera singer, a children’s performance, and African Dancers. There will also be a diverse variety of foods offered including BBQ, turkey legs, crawfish, hot dogs, nutritional drinks, and Juneteenth-themed tea cakes and red soda pop.

Credited to www.juneteenth.com the site reads “Juneteenth is the oldest nationally celebrated commemoration of the ending of slavery in the United States. Dating back to 1865, it was on June 19th that the Union soldiers, led by Major General Gordon Granger, landed at Galveston, Texas with news that the war had ended and that the enslaved were now free. Note that this was two and a half years after President Lincoln’s Emancipation Proclamation – which had become official January 1, 1863. The Emancipation Proclamation had little impact on the Texans due to the minimal number of Union troops to enforce the new Executive Order. However, with the surrender of General Lee in April of 1865, and the arrival of General Granger’s regiment, the forces were finally strong enough to influence and overcome the resistance.

‘Important to Remember The Significance of this Day’

Later attempts to explain this two and a half year delay in the receipt of this important news have yielded several versions that have been handed down through the years. Often told is the story of a messenger who was murdered on his way to Texas with the news of freedom. Another, is that the news was deliberately withheld by the enslavers to maintain the labor force on the plantations. And still another, is that federal troops actually waited for the slave owners to reap the benefits of one last cotton harvest before going to Texas to enforce the Emancipation Proclamation. All of which, or neither of these version could be true. Certainly, for some, President Lincoln’s authority over the rebellious states was in question  For whatever the reasons, conditions in Texas remained status quo well beyond what was statutory.”

“As the oldest celebrated national remembrance of the ending of slavery in this country, it is important that we all remember the significance of this day in the history of our state,” Representative Sherman concluded.

To register and learn more about this great 4-City celebration and its free concert with Howard Hewett, residents can visit the City’s website at https://www.ci.desoto.tx.us/332/Best-Southwest-Juneteenth-Celebration or the Eventbrite event page at www.eventbrite.com/e/best-southwest-juneteenth-celebration-tickets-153871370411.