Home News The Hickmans Have Impacted Cedar Hill for Generations 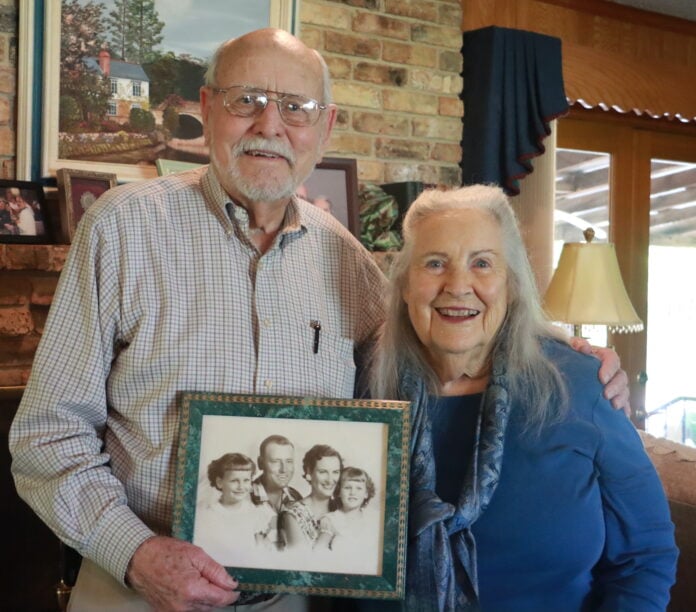 (CEDAR HILL, TEXAS) Traphene Parramore Hickman has some advice for the 518 members of the Cedar Hill High School Class of 2021 seventy-one years after she and 14 classmates accepted their diplomas from the district.

“The future’s just out there,” Hickman said. “Take every opportunity. Take every step. Go forward, even if you’re afraid. Live for tomorrow and never look backward.”

Traphene retired in 1996 after a remarkable career as the Library Director for the City of Cedar Hill and later, for Dallas County, and J.R. retired from Southwestern Bell (now AT&T) in 1984, after 35 years of service with the company.

The Hickmans have lived in the same Cedar Hill home since 1964 and proudly speak about their four grandchildren, four great-grandchildren and coming soon, their first great-great grandchild.

Witnessing The Growth of Cedar Hill

Traphene, 88, had just moved to Cedar Hill as a high school sophomore. She’d lived in Oak Cliff where the enrollment at her junior high school was more than double the population of Cedar Hill.

“I used to be able to take the street car to Fair Park or wherever I wanted to go, but I couldn’t do that once we moved to Cedar Hill,” Traphene said.

Her family, the Parramores, relocated to Cedar Hill because her father was set to retire as a Dallas Firefighter, and he wanted to purchase some land in what was the countryside.

Her childhood bedroom is located in what is now the dining area of the TGI Fridays on North Clark Road.

While today a trip from Cedar Hill to Oak Cliff is a quick jaunt on U.S. Highway 67 – even when there’s traffic – that wasn’t the case during the mid-20th Century.

Traphene lost contact with her Oak Cliff friends because talking on the phone would mean ten cents per call (equivalent to $2 per call today).

Church has always been a central part of Traphene’s life. It was there that she met J.R., who is a 92-year-old lifelong Cedar Hill resident.

The son of a sharecropper from Arkansas, J.R. was born in bottomland in what is now the bottom of Joe Pool Lake at Cedar Hill State Park. The doctor rode into the rural area on a horse and buggy.

J.R. initially attended school in an area called “Pleasant Valley”, which is the present day Lake Ridge neighborhood. His school was heated by coal, and he remembers classmates telling tall tales about a mythical “half person, half goat” that lived in the Cedar Hill countryside.

While ‘Bray’ and ‘Plummer’ are names that many Cedar Hillians hear as campus names but don’t associate with it personally. That’s not so for J.R.

“They were both really nice to the scholars,” J.R. said.

J.R. has seen Cedar Hill make an incredible amount of progress over the course of his lifetime.

“I am proud to live here,” J.R. said. “You see how smooth the city runs compared to a long time ago. All you have to do is drive through the city parks and see how neat and trim everything is.”

Cedar Hill Library Director Aranda Bell is in awe of the Hickmans’ contributions to the community.

“To know J.R. and Traphene is to love them,” Bell said. “They are a part of the fabric of our daily lives. Our communities have been blessed as they are trailblazers, pioneers and servant leaders.”

Traphene had a dream that she would marry J.R., who at the time was engaged to be married to his boss’ daughter.

J.R. worked at Cedar Plumbing and Electric as an electrician, before the days when electricians were certified and licensed. In fact, he wired early homes in Cedar Hill – many of which are still in use today.

He met Traphene and the rest was history.

J.R. was a standout basketball player, who earned “silver basketball pins” every time he made the all-tournament team, which was often.

Cedar Hill, now a football powerhouse known near and far, started a football program while J.R. was in high school. They played six-man football and didn’t register a single victory.

Traphene was a cheerleader in those days.

“The cheerleading team was new, so we listened to other schools’ cheers because we didn’t know any,” Traphene said. “I wasn’t a sports person, but I knew how to yell.”

In addition to sports and electricity, J.R. was among a group of Cedar Hill scholars to serve as school bus drivers while they were enrolled in high school. With World War II, there was a shortage of bus drivers, so teenagers such as J.R. filled the void.

J.R. had enlisted in the United States Marine Corps Reserves while in high school, and shortly after graduation in 1948 (in a class of 13 graduates), he was called to an assignment at El Toro Marine Base in Irvine, California. During his time in the military, he worked as a typist, having benefited from taking a typing class at Cedar Hill.

He went to work for Southwestern Bell after high school and was assigned to Houston since there was a lot more work there than there was in the Cedar Hill area.

At Southwestern Bell, J.R. literally climbed the ladder, first as a lineman and installer, and later, as a repairman and specialized equipment installer. By the time he retired in 1984, he had an office job in downtown Dallas as a Division Supply Supervisor.

Traphene raised the couple’s daughters, while J.R. worked, but she had her sights on a career.

“I started college in my 30s and earned my Master’s Degree in my 40s,” Traphene said.

“It’s so important for people to encourage their children to read,” Traphene said. “It keeps your mind sharp.”

J.R. decided to take a generous retirement package in 1984, because continuing with Southwestern Bell would have meant relocating to Denver, and he knew how much Traphene loved her job in Cedar Hill.

Traphene made the decision to retire in 1996 after a close friend became ill.

“We decided that if we were going to travel the world, that was the time to do it,” Traphene said.

And travel, they did. To places that they could only have dreamed about as youth in mid-century Cedar Hill.

Traphene was honored when the Library dedicated the Traphene Hickman Outdoor Music & Discovery Garden, outside the Zula B. Wylie Library. It features life-sized musical instruments for children (and adults) to enjoy outdoors.

“I love seeing kids play at the park whenever I go out to the library,” said Traphene, who was the March of Dimes Chairperson for Cedar Hill and a former chairperson of the Cedar Hill Chamber of Commerce.

She also served as Evangelism Chair for the First United Methodist Church and is a Master Storyteller.

Although they’ve lived through so much American history, from the Great Depression, World War II and Polio to present day, the Hickmans admit that the COVID-19 Pandemic was a challenge for them.

They are both fully vaccinated now and are starting to see friends and family more often.

“This has been the worst,” Traphene said. “We would often play dominoes. J.R. usually wins, but we kept playing. I would win a game, but that would mean that he’s won 10.”