It’s one thing to be late to class, but what if you’re never going to show up again – for anything?
Well, when a monster is roaming the hallways of your school, that could very well be the case if you’re not careful.
That’s the premise of the movie “Tardy Terror,” a feature-length film created by students at Grand Prairie ISD’s Dubiski Career High School. As has been proven time and again from “Carrie” to “Buffy the Vampire Slayer,” monsters and high school have gone together like, well … Frankenstein and Dracula.
In the 2018-2019 school year, Dubiski Career High School instructors Tyler Case and Brian Blosser took a short-film project and turned it into a full-blown movie-making adventure. “Tardy Terror,” had a budget of $3,000 (with $2,500 of that donated) and ended up taking 65 days to shoot.
That didn’t involve editing, post-production, or a worldwide pandemic that slowed – but didn’t stop – the project.

The cast is almost exclusively students, though some professional actors, previously brought in to speak to and mentor students, ended up being part of the film as well. Several teachers were also involved, as were a number of extras and even some parents.
“Even if these students don’t pursue a career in film, they have gained valuable skills through their work on ‘Tardy Terror,'” Case said. “From being held responsible to their peers, to cooperative skills, to time management, they have taken on roles that many adults could not maintain.
“With the added pressure of COVID, they have also learned resilience and persistence. It would have been very easy to scrap all their work and chalk it up to the pandemic. But they have shown their commitment to complete the movie and a commitment to their castmates.”
Though most of the film was shot on the Dubiski campus, the crew also used Main Event in Grand Prairie, Hangman’s House of Horrors, and the Gopher-Warrior Bowl. Costumes were made by Midnight Studio Effects and the school’s Architecture pathway even built some of the sets. 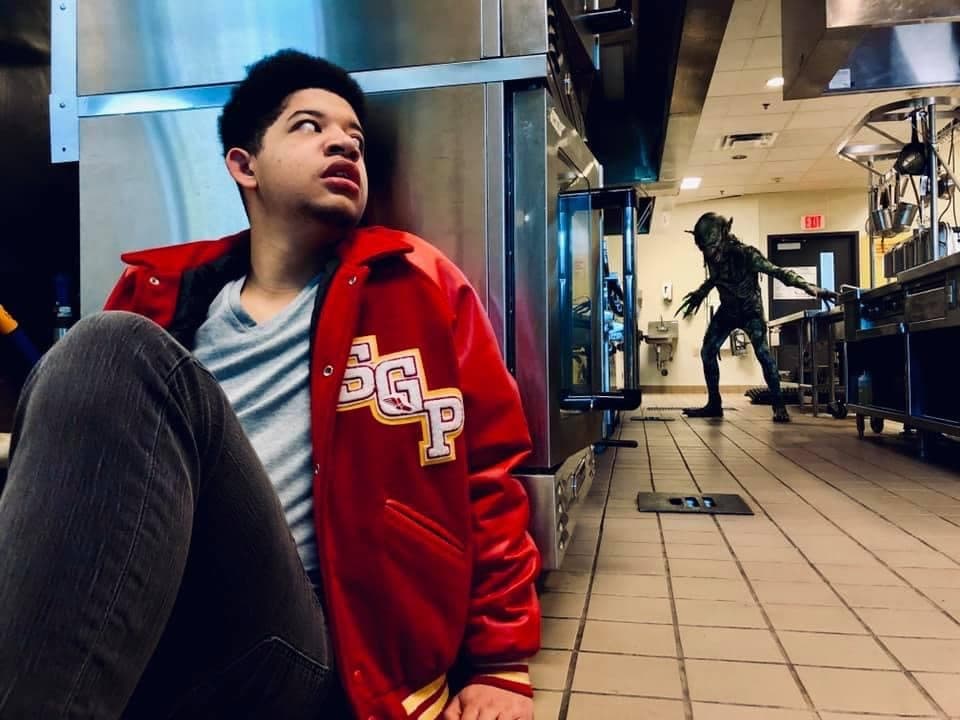 The students hosted a limited, invitation-only, masked and socially distant premiere at the Studio Movie Grill in the Arlington Highlands on Oct. 29. On Halloween, they had a 24-hour showing of the movie on YouTube.
Now, their goal is to submit their work to film festivals, get it on Amazon Prime and Vudu, ultimately marketing it for sale with money going directly back into the program so other students may have the same opportunity.
Senior Angia Le, a videographer/photographer on the movie, credits working on the film with learning new avenues of the film industry.
“My experience working behind-the scenes on ‘Tardy Terror’ is one I’ll cherish for a long time,” she said. “Capturing behind-the-scenes footage has taught me to look for those lighter moments that get lost in the chaos of making a movie. It’s also allowed me to explore a different approach to storytelling: videography, which has quickly become a passion of mine and one that I want to continue honing my skills in.”
Case said the project is the perfect example of the class motto of “Team work makes the dream work.”
“These students have certainly achieved a dream and learned so much through real world experiences making a feature film,” he said.
For a sneak peak at a scene from the film, and a behind-the-scenes look, visit these links:Tardy Terror – The Blast Clip, Behind the Scenes