Duncanville Community Theatre kicks off its 2019-2020 season with a delightful farce written by Michael Parker and Susan Parker. Directed by Joe Skrivanek, the show runs weekends of July 18-20 and 25-27.

The plot, in a nutshell: Audrina Brown recently inherited Lovers’ Landing Beach Hotel from her deceased father. The hotel is located in a southern state on the Gulf of Mexico. It has become a popular wedding destination, promoted over the years as “The home of Sandy Toes and Salty Kisses.” As a result, the hotel seems to have acquired some kind of mystique. 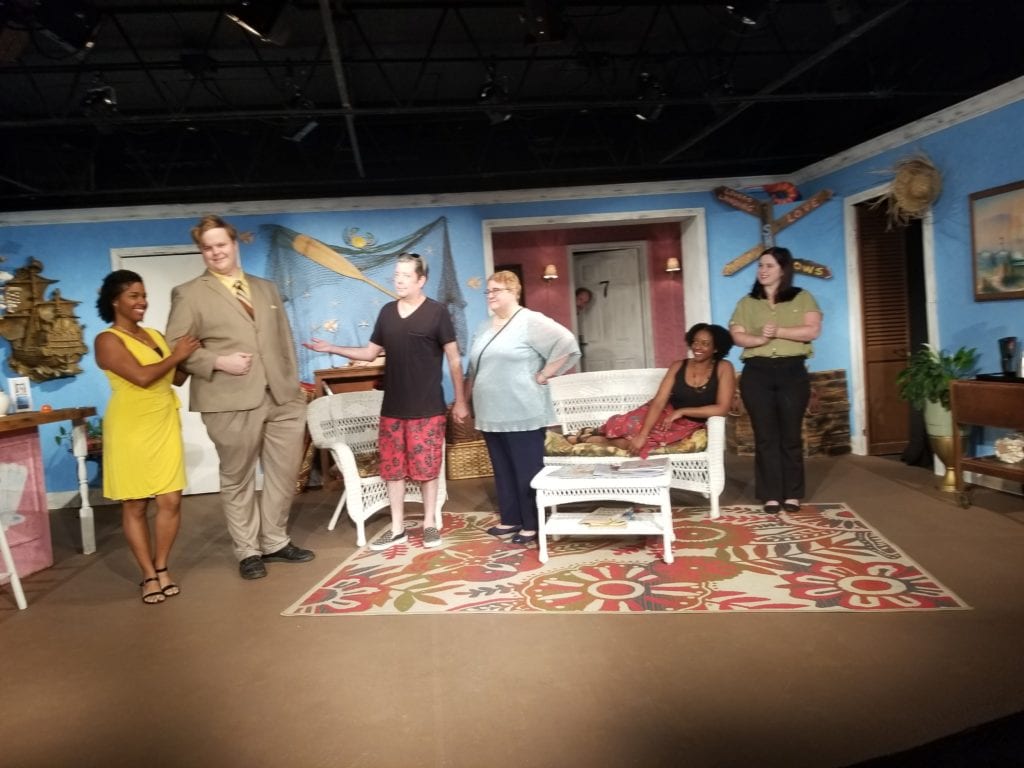 Audrina’s Uncle Bubba has worked his whole life at the hotel. He seems to be a “Jack of all trades.” In addition to his maintenance duties, he has developed a variety of extra-curricular activities. Audrina quickly discovers that these activities may be illegal. They run the gamut from cash prize bingo, to a rum distillery, to off track betting.

Beatrice Rutherford-Smythe, a “New England blue blood,” arrives with her daughter Traci to check the place out for Traci’s wedding. She hopes to talk Traci out of the Lovers’ Landing Beach Hotel and the marriage. Traci won’t budge, and they have an appointment with Madame Coco, the hotel’s wedding planner. Unfortunately she has eloped. The only staff member who knows anything about weddings is Uncle Bubba, who now has to spend the rest of the play alternating between himself and Madame Coco.

Two other guests arriving that day are Traci’s finance, Peter Mudd, and a mysterious gentleman, Douglas DuPont. Through a mix up of room numbers, a series of mistaken identities ensues. Candy, the hotel receptionist is bribed by Beatrice to flirt with Peter, but ends up with Douglas. Douglas, who is actually a travel writer for destination weddings, is mistaken for a federal agent. Candy’s report to Beatrice introduces a roller coaster of events leading to an “on again-off again” wedding.