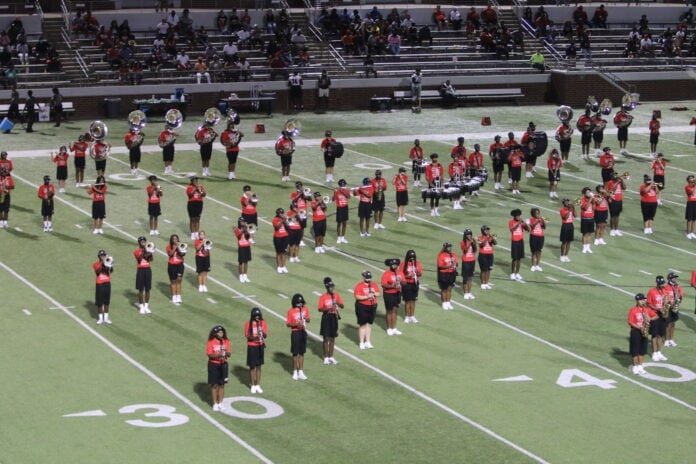 As a popular song once noted in its lyrics, “All we need is music, sweet music…”
You know, the kind of music produced by musicians such as those in the Cedar Hill High School Longhorn Red Army Marching Band. The band, under the direction of Cedar Hill Fine Arts Director Derrick Walker – a two-time Grammy Award nominee – has been selected as favorite band in the Focus Daily News 2021 Readers’ Choice Awards.

“I’m kinda shocked being that we have so many phenomenal bands in the area. Duncanville, Midlothian, Mansfield schools are UIL Area participants every other year,” Walker said.

But the thing that separates the Longhorn Band from others in the area – and elsewhere – Walker stated can be summed up in a single word.

“Entertainment!” He said enthusiastically. “We treat every marching band experience as pure entertainment for our audience. We save all of our sonorous (deep sound with a rich quality, such as James Earl Jones when he announces CNN) and beautiful sounds for concerts and spring performances. Fall marching band is about supporting our football team and wowing the crowd with the latest pop charts and dance moves.”

Of course, the band has plenty of its own accolades as well. There is no absence of trophies in their case. The Longhorn Band is the No. 1 ranked showband in the state of Texas. In 2019 they were Grand Champions of the National Showband Association Battle of the Bands held in Houston featuring bands from Louisiana, Texas and Mississippi.

Walker takes pride in the Longhorn Band’s tradition, which he said is a “fun band that’s always loud and proud.

“We are the Longhorn Red Army Marching [band], giving you one thousand watts of sound!” he declared.

Walker has been the head director of the band for two years after serving as the associate director the previous four. In all, he has 21 years in education and is one of only three fine arts directors in Texas who also teaches classes.

“I love working as an administrator, but I love teaching even more,” Walker said.

His second Grammy nomination came earlier this year for music education. He was also nominated in 2012 for the same honor when he was a band director in Baton Rouge, Louisiana.

Unlike the loud, proud music of his band, Walker is humble about his Grammy nominations.

“Just to be mentioned is a huge deal. The last thing you’re thinking about is winning a Grammy,” Walker said.

‘Heartbeat for the Red Army Band’

“Mr. Walker has been the heartbeat for the Red Army Band,” Cedar Hill High School Principal Jason Miller said. “This nomination is recognition of his tireless efforts with scholars, families and the Cedar Hill Community.”

And the Cedar Hill community loves hearing the Red Army Band at more than sporting events. This is evidenced by their popular demand throughout town.

If there is a local parade, odds are the Red Army Band is there. Same with restaurant openings. They’ve also performed at numerous pregame ceremonies at college football games, including Grambling vs. Prairie View, Southern University vs. Texas Southern, Arkansas-Pine Bluff vs. Southern University in Baton Rouge, and at the First Responders Bowl in 2018 that featured Boise State and Boston College.

Their most recent college football game performance was on Sept. 25 when they were showcased at the State Fair Classic featuring Grambling and Prairie View. It came after the Red Army Band won a fourth straight Battle of the Bands in Lancaster earlier that day.