When we heard the 2020 Olympic Games were cancelled, I reached out to our local Olympian, Michelle Carter. Focus Daily News has followed Michelle’s career since her Red Oak High School days, before she won a Gold Medal in the 2016 Olympic Games shot put competition. Michelle gave us permission to use the following quote she made March 22 on her Facebook page.

“This is the moment that every Olympian and Olympic Hopeful dream of.

In a matter of weeks the plan for that dream has changed. It takes a lot of planning and tons of hard work for this one moment in life.

Today we were informed that the Olympic Games will be postponed because of the corona virus. Many athletes around the world have been affected by having our training facilities closed to gain control of the spread of the virus.

I do think that postponing the Games is best. It gives athletes time and peace of mind to prepare properly for the Games and give the world time to recover from the virus.
It’s unfortunate that the Games are postponed but our health as a human race is most important.”

The 2016 Olympic Gold Medalist grew up in Red Oak, joining her school’s track team as a 7th grader. She specialized in the shot put and discus throw. Her father, Michael Carter, is also an Olympian who won a silver medal in the 1984 Summer Olympics.

While her dad trained her, Michelle said he didn’t influence her to go out for track. She won four state championships in the shot put at Red Oak High School, and also played basketball and sang in the school choir. 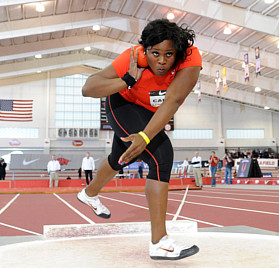 Attending the University of Texas in Austin on a scholarship, Michelle won the 2006 NCAA National Championship. She was a seven time All American, winning the Big 12 Conference Title five times.

Competing in the 2008 Olympic Games, Michelle finished in 15th place. She moved up to fourth place at the 2012 Olympics. A Bronze Medalist at the 2015 and 2017 IAAF World, Michelle won the 2016 gold medal at the Rio de Janeiro Olympics on the last of her six throws. She broke her own American Record with the winning toss of 20.63 meters. 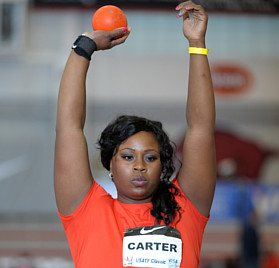 Carter was the first U.S. Women’s Athlete to win the event since the competition began at the 1948 Summer Olympic Games in London, England. She was only the second American to win any medal since Earlene Brown’s 1960 bronze medal. In 2018, Michelle Carter was inducted into the Texas Track and Field Hall of Fame.

Michelle stays busy as a public speaker and working with her nonprofit organization, “You Throw Girl.” The Sports Confidence Camp is for young female athletes, grades 6-12, in all sports. She teaches the young ladies to thrive while living a healthy lifestyle. For updated information about Michelle Carter, visit ShotDiva.com.