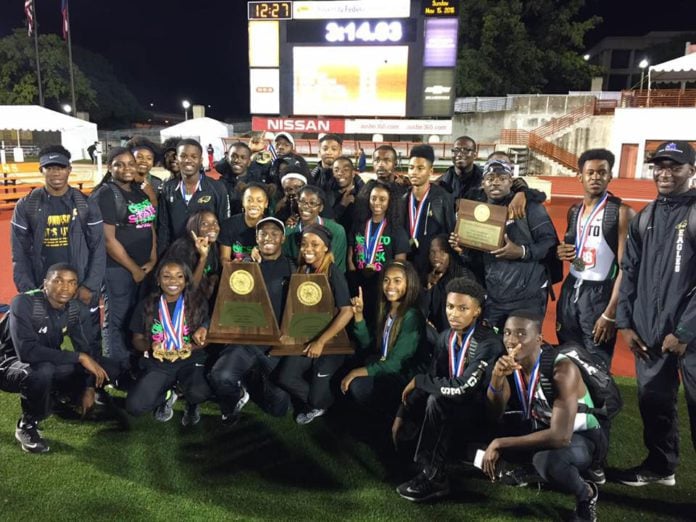 DESOTO—Congratulations to both the DeSoto Women’s and Men’s Track Teams for winning the 6A State Track Meet at the University of Texas in Austin on May 14. The Lady Eagles won the first five races they competed in – 100M, 100M and 300M hurdles, 4x100M and 4x200M relays; the boys won their first two – high jump and 4x100M relay.

The women finished with 79 points (Cypress Springs in 2nd with 60) to win its first state title since winning three straight from 2011 to 2013. DeSoto finished third in 2014 and was the runner-up last year. Alexis Duncan set a new 6A State Record in the 100M hurdles as she three-peated in the 100M hurdles and repeated in the 300M hurdles – she is a five-time State Champion in the hurdles, and has several relay medals as well! The women earned points in all seven events!

The pressure was on for the men after winning the first two, they only had the 4x200M and 4x400M relays left to compete in and were behind Manvel entering the final relay. A second-place finish in the 4x400M secured the win and a sweep repeat of 2012. DeSoto is the only ‘big’ school to have won the men’s and women’s titles in the same year – and this makes it twice!