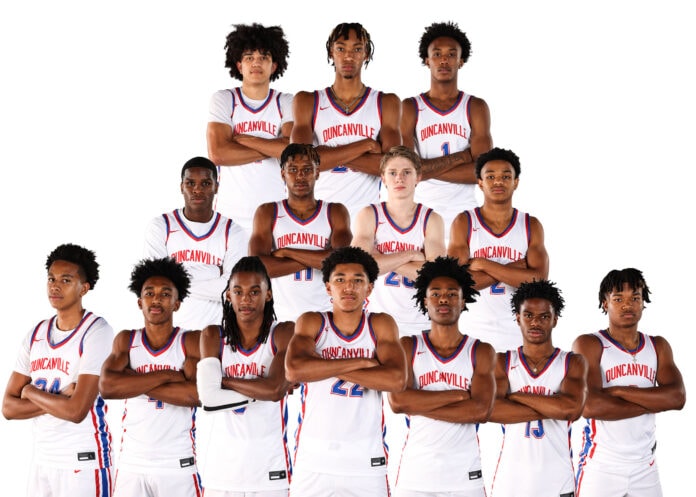 Before 2019 the Duncanville Panthers had three state basketball championships. Now, if things go according to Hoyle they can double that amount if they repeat as kings of Class 6A.

The University Interscholastic League playoffs are underway this week and the Panthers are going for a third consecutive state championship, though not in consecutive years. They won the title in 2019 and 2021, but no champion was crowned in 2020 because of the COVID-19 pandemic, though they did make a return to the state tournament.

Panthers coach David Peavy admits the team has talked all season about a third consecutive title, but now that the postseason is here, the mindset adjusts a little.

“Once you get to the playoffs, it’s important to lock in for each game. We can’t start thinking about the championship and not focus on the game we have in front of us,” he said.

“Once we get to the playoffs, we see a change. When the boys and girls are in the playoffs it just feels different. The excitement level is a little bit higher. The further we go, the more excited everyone is in our community.”

That, being defending state champions and the program’s historic tradition, makes a game against Duncanville the one circled on every team’s schedule. Peavy said the team has come to embrace that.

“We are the target. We’re going to get their best every night. We allow that to make us better,” he said. “Our kids love being a part of the tradition. They understand who we are and what’s important to our community. We take being a champion very seriously.”

Led by Duncanville’s recent success, the FDN coverage area has included seven boys basketball state championships since 2015. The list includes Lancaster in 2015-16, DeSoto in 2016, Mansfield Timberview in 2017 and 2019, and Duncanville in 2019 and 2021.

As this year’s playoffs begin, there are several area teams with legitimate shots at joining and/or expanding that list. In 6A, along with No. 2 Duncanville is No. 16 South Grand Prairie. In 5A, Lancaster is No. 3, Mansfield Summit No. 6, Timberview is seventh, Mansfield Legacy is ninth and Red Oak is No. 17. In Class 4A, Wilmer Hutchins ranks No. 17.

As if Class 5A Region I weren’t tough enough, with the likes of No. 14 Birdville and No. 15 Richland, the majority of the local talent in the region resides in the same city. Three teams from Mansfield rank in the state’s top 10.

Leading the pack is No. 6 Summit, while perennial power Timberview comes in at No. 7 and Legacy is ninth.

Through it all, MISD Athletic Director Philip O’Neal continues to take a humble approach, saying, “The success of our teams is a tribute to the hard work of our most talented student athletes and the dedication of our amazing coaches.”

Getting to Austin will involve going through some very treacherous terrain. No less than eight teams in the region are in the top 18 in the state.

“There is no room for error when you play teams this good, and games that should be happening in the regional tournament happen in Rounds 1-3,” said SGP coach Brandon Bennett. “Coaches have to get their kids mentally focused and locked in during practices. The goal is to make practice harder than games, so you’re prepared to handle all situations.

“All of the kids in this area know each other so there will not be any hidden secrets. This difficulty elevates everyone’s play and will create highly competitive environments, but unfortunately some very good teams will be eliminated in some of the early rounds.”

The survivors in each region will find themselves playing at the Alamodome in San Antonio March 10-12.