Home Commentary Momma Vs The Rooster 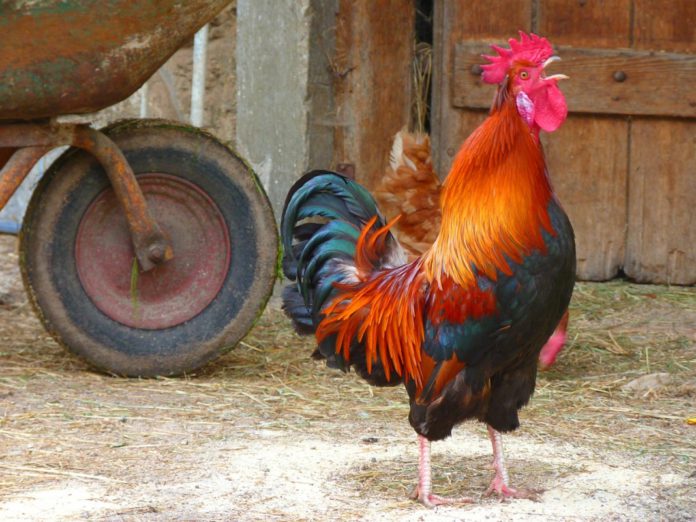 After Mother passed a few years ago, I packed away her personal things in an upstairs closet.

On occasion I would visit the closet and look through some of the boxes and albums, remembering vividly when she was such a smiling part of my life. There is not a day that passes, that I don’t reflect on her precious memory.

One shoe box was filled with old photographs. Some were more than 80 years old. There was one picture of me at about 4, standing next to a tricycle wearing cotton “drawers” crying through clenched fists. Tears from frustration on my cheeks, because I had not been able to master the art of riding that trike.

Looking closely at the picture, I noticed a large scar that ran from my left thigh to my ankle. The other leg had an assortment of bruises and scars from the knee to foot. This picture was taken one week after the “Battle.”

We lived in a small house at the Seymour Golf Course. Dad was a caretaker of the greens, while my Momma cooked for the Rock Inn Café in Seymour, Texas. My world consisted of the small frame house, cellar, chicken house, garden, out house and abandoned well.

My day was spent playing, going to see my dad, eating from the garden, chasing butterflies, killing grasshoppers, and gathering eggs while staying out of the way of Romeo. Romeo was the name for the large rooster. Later Mother told me she had given him that name because “he was very much a lady’s man.”

Whether I was picking onions, watering the garden, gathering eggs or looking through the Sears catalogue in the outhouse, I had to keep a wary eye out for Romeo. Many times I would barely make it to the porch or the well, before he attacked. Jumping high in the air with sharp spurs pointed at me was frightening. Then he would prance around strutting with lowered wings, only to crow when he heard me crying.

One day I was gathering tomatoes in the garden, when Romeo spied me. I dropped my basket and headed for the well, but Romeo cut me off and the porch was too far. The only high ground was the ventilator on top of the cellar. I had never retreated there before, because it was not very high off the ground.

I jumped on top in an instant, making sure to keep my toes out of the spinning blades inside the vent. Romeo crowed with victory as he launched himself high in the air. A spur caught my thigh and ripped it down nearly to the ankle. It knocked me off the vent. After wiping some of the blood off my face and some dirt out of my eyes, I got back up on the vent. Romeo was still doing the Dominecker Strut.

The only time I got to sit on my haunches was when Romeo went off to molest a hen. The hens were hiding in the chicken house.

Finally, after what seemed like an eternity, I heard the truck coming up the road. Momma was driving. Romeo was doing his demonstrative strut when he saw the truck. Mother got out of the truck before it stopped and ran toward me, crying my name. Romeo spurred me one last time, before he started running at mother crowing.

They collided with Romeo’s spur held high and Mother’s hands outstretched. All I could hear was screaming and crowing, and all I saw was teeth and feathers, flying hair and more feathers. Romeo was spurring mother while she had both hands around his neck. Suddenly, Romeo appeared high in the air. Around and around he swung, as Mother had hold of his head and neck. Then there was a crack like Will Rogers’ whip.

Romeo’s body separated from his head. After landing, it did a little jig. Mother still had the head. Her arms and hands were bleeding, but Romeo was stone cold dead. Mother scooped me up and ran to the house. She put some salve on the wounds, tying them up with a shredded pillowcase.

Mother placed me in the truck and we sped away to see Doctor Balch. I cried and told him all about Romeo. He commented about what a brave boy I was, as he stitched me up. Mother didn’t need stitches but Doctor Balch attended to her wounds. I could hear my Momma crying in the next room talking to the doctor. I couldn’t hear what was said because his voice was soft and soothing.

The next morning I awoke to the most wonderful aroma. Mother came and sat next to me and told me we were having chicken and dumplings for lunch.

Not only was Romeo’s departure filling, but all the hens seemed relieved as well.