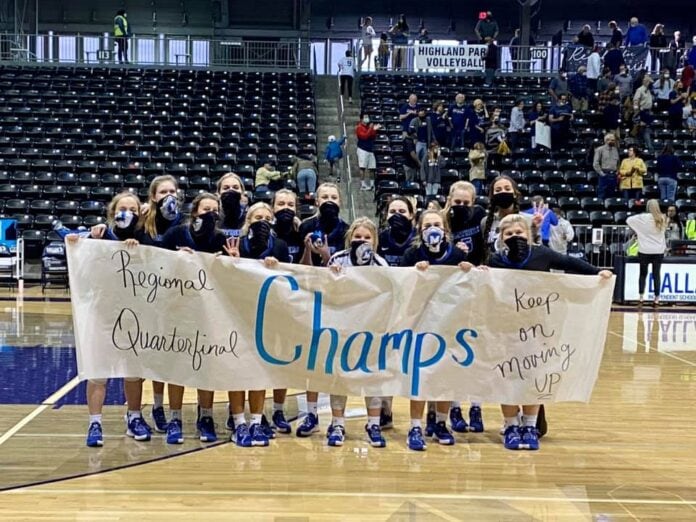 For years, North Texas has been a hotbed of volleyball talent, with much of that being in the Focus Daily News coverage area.

And while 2020 and the COVID-19 pandemic did change some things about the season, the talent on the area’s volleyball squads remained strong.

Anchoring that success once again are the programs at Midlothian and Midlothian Heritage High Schools. As has been the case for some time, each made its program well-represented in both the regular season and the postseason.

Midlothian won District 14-5A – the first outright district championship in school history – and advanced deeper than any area team in the playoffs. The Panthers finished 22-4, reaching the Region II semifinals before falling to another perennial power, Lucas Lovejoy, which remained undefeated at 24-0 with a 3-0 victory.

Prior to that loss, the Panthers had defeated Forney 3-1, Lufkin 3-0, and Dallas Highland Park 3-2 in the postseason.

Across town, Heritage captured the top spot in District 11-4A. They followed by reaching the area round of the postseason, first sweeping Wilmer-Hutchins in bi district 3-0 before falling to Aubrey 3-0. The Jaguars ended the season with a 19-9 record and were unblemished in league play at 12-0.

Erika Weber is in her second year as Heritage head coach, coming from another winning program just down the road in Waxahachie. She brought her own high expectations to a program that is already used to reaching high.

“The success wouldn’t be possible without the mindset that has already been instilled in these student-athletes. I have been blessed with athletes that strive to bring their best every day and that know how to work hard on and off the court,” Weber said. “A lot of my girls play club volleyball outside of school and are able to get reps all year round. This obviously helps with skill and technique but also with experience comes knowledge of the game.

“We started this year knowing it was a true opportunity and privilege to step on the court each day and to not take a moment for granted. My girls just wanted to play the game they love. Thankfully, we were able to do that.”

The Jaguars’ roster included three seniors, six juniors, two sophomores and a freshman. They were led by senior Elizabeth Schmidt, who was MVP of the district.

Adversity Brought Out The Best

“This year obviously brought it challenges. We had to come up with different ways to bond as a team, we had to stay separated on bus rides, etc.,” Weber continued. “But the most obvious – the mask. With all of the changes, and what felt like adversity at times, it only brought out the best in these girls.”

Midlothian volleyball coach Shain Sackett, likewise, has a history of success that, combined with the program’s tradition, equals being one of the best in the state.

“What makes Midlothian seemingly great year-in and year-out? It’s easy to say things like ‘having great players’ and ‘having great coaches,’ but I think one of the main things driving the success of our program is the pride that comes with being a part of the Panther tradition,” Sackett said. “Our winning tradition has been built on the backs of our great athletes of the past – and these younger generations of kids, who have grown up around here do not want to let those traditions die out, so they keep working hard and hold each other to a higher standard.

“Some schools have the benefit of open transfer, and some schools, like us, just depend on the girls who live in our attendance zone. Sometimes, we come across third and fourth, and even fifth generations of a family who played volleyball for Midlothian ‘back in the day.’ There is some pressure there to live up to the expectations. We love pressure.”

A Wild Season, A Lifetime of Memories

And perhaps in no season was there more pressure than 2020. There was the constant possibility of the season being canceled altogether at any moment.

“This year has been a wild one to say the least. And I think this team is probably one of the very few that could handle all the “change” as well as they have, and put together a really fine season,” Sackett said. “We’ve tested ourselves against not only 5A schools, but 6A as well.”

The Panthers were led by two-year team captains Aryn Walton and Karsyn Curry. In all, the roster featured five seniors, four juniors and four sophomores.

“Yes, we have some great players who go out and do club volleyball to help make themselves better, and they come back to us and are willing to work their tails off, so that we can make another playoff run,” Sackett continued. “The players flat out sacrifice for what they want – a successful team. They don’t have to all play together in club, because they want to make themselves the best player at their position that they can, for when they come back to school season. They come back to us with a hunger to play Panther Volleyball, and they hold each other accountable for what they all want – a deep playoff run.”

In all, 11 area teams reached the postseason in their respective classifications, including five in Class 6A, four in 5A, and two in 4A. Of those, four were district champions and eight advanced to at least the second round of the playoffs.
Class 6A

Waxahachie: Fourth in 11-6A; defeated Killeen Harker Heights in bi district, 3-0; lost to Sasche in area, 3-1.

South Grand Prairie: Third in 8-6A; lost to Richardson Pearce in bi district, 3-0.
Class 5A

Lancaster: First in 12-5A; defeated Carrollton Turner in bi district, 3-2; lost to Lebanon Trail in area, 3-0.

Mansfield Legacy: Second in 8-5A; defeated Fort Worth Trimble Tech in bi district, 3-0; lost to Wichita Falls Rider in area, 3-1.

Mansfield Timberview: Fourth in 8-5A; lost to Saginaw in bi district, 3-1.
Class 4A

Midlothian Heritage: First in 11-4A; defeated Wilmer-Hutchins in bi district, 3-0; lost to Aubrey i