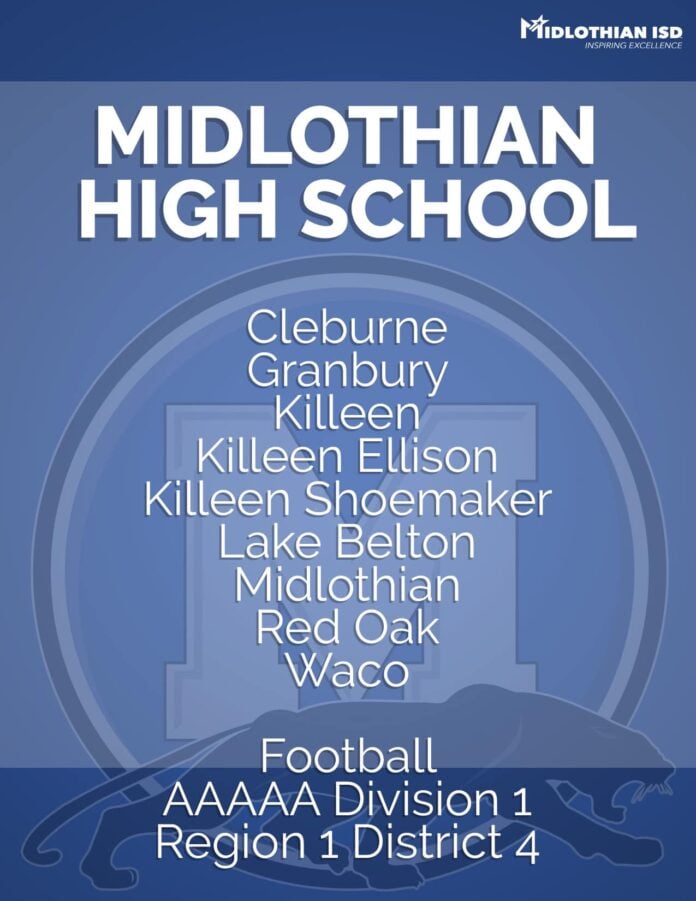 The schools are across town from each other. Many of their students are friends.

However, Midlothian High School and Midlothian Heritage have not competed in the same district in any sport – until now.

The University Interscholastic League’s latest realignment, which was released last Thursday, put the two schools in the same league in every sport except football. In all other competitions they will share District 8-5A with Mansfield Summit, Mansfield Timberview, Arlington Seguin, Burleson, Burleson Centennial, Cleburne and Joshua.

In football, the Midlothian Panthers are in 4-5A Division I with Red Oak, Cleburne, Granbury, Killeen, Killeen Ellison, Killeen Shoemaker and Lake Belton. Heritage’s Jaguars will compete in 5-5A Division II with Summit, Ennis, Seguin, Burleson, Corsicana, Everyman and Joshua. 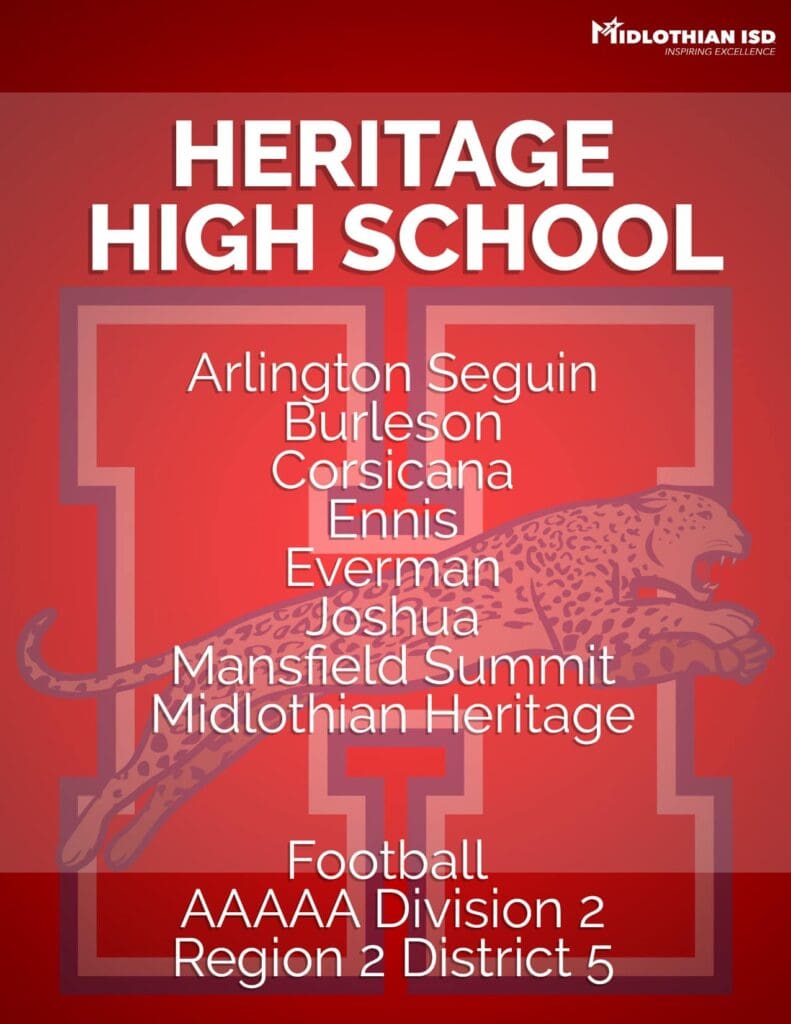 While they will not share the same district in football, or even play each other in that sport, according to MISD Athletic Director Todd York, being in the same league in all other sports should create a nice crosstown rivalry. Prior to this season the schools weren’t even in the same classification as Heritage competed in Class 4A and Midlothian was 5A.

“Things will heat up. Hopefully it raises the play of both schools,” York said. “Having seen this before I am sure the coaches and the players will handle it well.”

Both schools are strong in sports across the board. Now, for example, the powerhouse volleyball programs will be battling for citywide and district supremacy, as will the girls soccer programs – which includes the defending 4A state champions at Heritage.

“This is the life of 5A volleyball. We aren’t ones to shy away from competition,” said
Midlothian volleyball coach Shain Sackett. “We figured we would be in the same district with their numbers the way they were. We just didn’t expect to move across the region line to meet them. 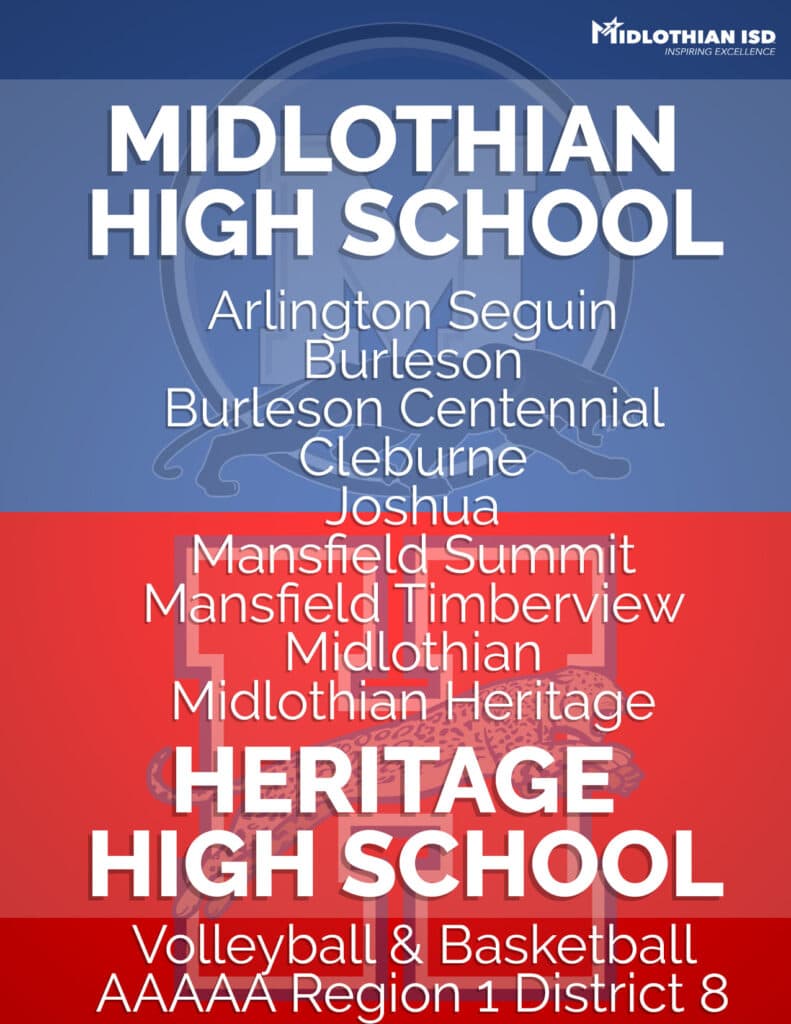 “It’s an interesting setup, that’s for sure, but as far as we are concerned, we just try to take care of business on our side of the net, and we like to play against tough competition to help us get better (and playoff ready). The best thing about it is it’s only a six-minute ‘road trip,” he added with a chuckle.

“The Midlothian High Panthers will be ready to play whoever is on our schedule, I can guarantee you that.” Heritage girls soccer coach Gerald Slovacek said he and his Lady Jaguars are excited about sharing a league with the Lady Panthers.

“We are looking forward to the excellent level of competition in the new district. Coach (Austin) Guest, at Midlothian High School is a mentor and great friend of mine,” Slovacek said.

“Over the years, he has taught me so much and continues to do that. We hope to be able to compete at a high level against the Midlothian program, and all of the schools within the district. We are hoping to finish our final year in 4A soccer strong, and continue to build a solid program that will be relevant for many years to come.”

Robert Brown, obviously a Heritage fan, said tongue in cheek of them not playing football, “I’m sure it has something to do with the Panthers being scared of playing the Jaguars.”

James Bagby added, “They should play in a nondistrict game. I have never understood why they don’t.”

Danny Jeanes questioned the UIL’s decision on the placement of Midlothian.

“Initial thoughts are MHS has a distinct advantage in all of the non-football sports because their district is made up of smaller 5A schools,” he said. “However, their football district absolutely sucks for travel. They’ll be traveling to the Killeen/Belton area twice a year. I-35 South is always fun on Friday afternoons.”

York said not to fret, football fans. The day is coming when they will compete regularly in that sport also.

“They will be in the same football district soon. We are upgrading the stadium this summer in preparation,” he said. “It will be the biggest game ever held in that stadium and a sight to see.”

Other parents are upset and concerned from a travel standpoint and the impact it has on students academics. From Midlothian to Killeen that’s over 130 miles one way on a crowded bus. Parents are concerned about the late nights with the travel involved. Band students may return home from a game late Friday night and need to be back at practice early Saturday morning for marching competitions.