MIDLOTHIAN – The Harder family had lived in Midlothian 12 years when their home burned to the ground during Texas’ recent arctic freeze.

Matt Harder, who has also worked with the Dallas Police Department in the patrol division for 12 years, said he has been working on the streets of Dallas for as long as he has been living in Midlothian. When his home burned down on February 18, however, he and his family discovered the meaning of good neighbors.

“We have had so many people in our community help us, whether that is helping us clean off pictures and things we tried to salvage, giving us gift cards or praying for us,” Harder said.

To begin, Heroes of Midlothian gave the Harder family a gift card for $500 and then another $40 gift card to Fuzzy’s Tacos. 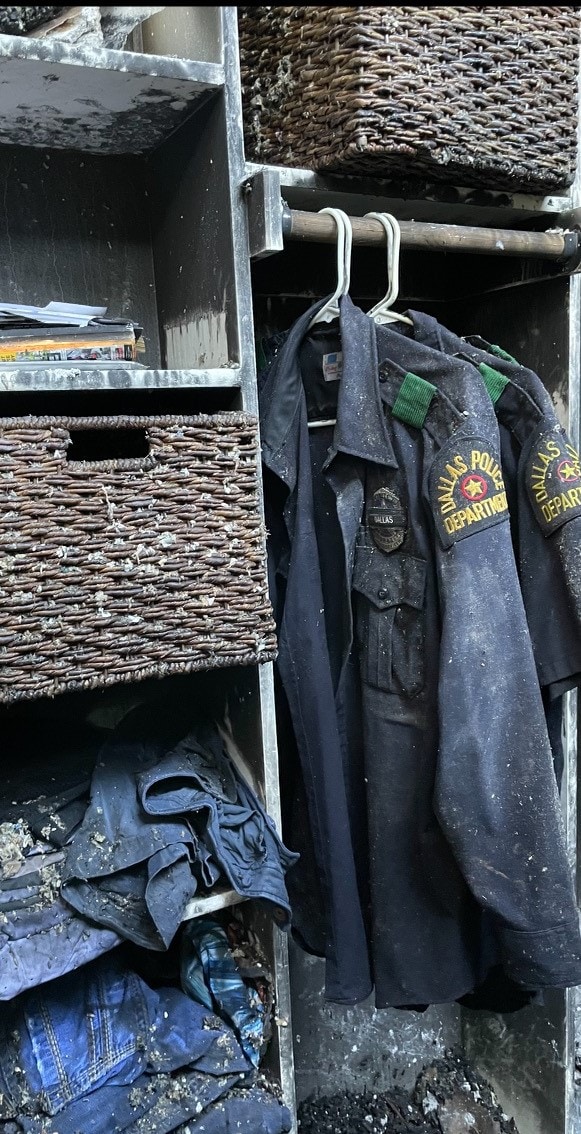 The Fireplace Was The Cause of The Fire

Harder said the fire started in the chimney. The chimney became overworked since they were burning a fire around the clock for warmth. The family had been without power for the week with the fireplace the only source of heat.

“We were using the fireplace to keep the house warm,” Harder explained. “It then started the attic on fire, resulting in the ceiling collapsing and burning the rest of the house down.”

I spoke with Midlothian Fire Chief Dale McCaskill about the dangers of fireplaces, and what happened that led to the Harder’s fire.

He said homes that were built beginning in around the 90s have metal inserts in some cases – as in the case of the Harder fire – and the fireplaces and chimneys are not made to burn fires that are designed to heat the home. These fireplaces with the metal inserts are for short fires – like maybe a cold night watching a movie.

He said fireplaces with these metal inserts are not “in and of themselves” bad, but just not for long-term fires to heat a home. The masonry fireplaces that one would use to heat a home cost about $7000 to $10,000 more in a home.

Harder’s wife Melanie, youngest daughter Alyssa, two dogs Libby and Berkeley, and the family cat Chloe were living in the house at the time.

“Our cat Chloe sadly did not make it out of the house,” Harder added.

Even so, the Midlothian ISD Volleyball team wanted to help. First they tried to help the family find their cat. They also worked to make sure Alyssa did not have to worry about her Volleyball team uniform.

“The Harder Family has been involved in Midlothian Volleyball since Alyssa was in middle school,” said Heather McMichael of Mac Marketing LLC. “Our families have grown up together within this program. When we heard about the house fire and it being one of our own, we immediately began collecting donations for them.”

McMichael said one of the biggest worries for Alyssa was her concern for her practice shirts and volleyball shoes/knee pads.

“With one phone call to the coaches, we had new practice jerseys for her, a new backpack, knee pads, spandex, etc.” McMichael explained.

The coaches also spoke with their supplier for court shoes and they agreed to ship Alyssa a new pair of shoes at no charge.

“We are like one big family,” McMichael said. “We support one another through the good times and even the bad. We’ll continue to support the Harder’s throughout the coming months as they clean up and rebuild.”

Matt concluded “The house was burned down completely, resulting in a total loss. We would have to completely rebuild the home and then move back in, so it will be a while.”

As the community comes together for the Harder family, they have decided they will definitely stay in Midlothian.

Harder said for the time being they are in a rental house in Midlothian for the next year, “while we figure out the next steps.”

Chief McCaskill suggests always have an annual cleaning of your fireplace. Never leave a fire unattended. Also, remember fire starter logs have a lot of chemicals that can perhaps cause problems down the road if you do not have an annual chimney cleaning.