Rachel’s 18-year-old sister Olivia, a Heritage High School senior, was driving their Jeep Wrangler. The girls were going to pick up food about 7 p.m. on Jan. 1. A friend was in the passenger seat, with Rachel in the back seat when they were “t-boned” by a Ford F-150 truck. The pickup’s driver ran a red light at Walnut Grove and Highway 287 intersection.

While Olivia and her front seat passenger weren’t critically injured, Rachel had to be cut out of the vehicle by MedEvac. She spent several weeks in a coma and in ICU at Methodist Central in Dallas. Her parents Terry and Stacie have kept vigil 24 hours a day.

Rachel has recently come out of the coma, and her doctors appear optimistic about her progress. She will have to undergo a long period of rehab before she can return to school or resume normal activities. The local community has shown an enormous outpouring of concern and support for the Richie family.

When I was assigned to write this article, I reached out to several people for quotes. There was such an overwhelming response to my requests, I’m going to let Rachel’s friends and family members chime in here.

One of the first fundraising events happened when Christian radio station KLTY held a fundraiser at the Midlothian Chick-Fil-A. They raised $15,000 for the Richie family.

Rachel’s mom wrote in her daily blog post on social media, #RaisingUpRachel: “KLTY! I was in the car with Olivia listening to the station when they called. Ever since Rachel got her driver’s license she always listened to KLTY for ‘protection’ from an accident. We are once again blown away by all of the fundraising efforts being initiated. To hear Rachel’s name over and over on the radio today has been amazing. She heard it too.”

Matt and Tamy Snow were among the first to respond when they heard about the Richie family’s ordeal. They met the Richies when their daughter played club volleyball with Rachel and Olivia. Immediately wondering “what can we do,” the Snows decided to plan a fundraising event.

“After the accident occurred and the severity of the injuries was realized, we wanted to do something to help,” Matt Snow said. “We originally began with the idea of a wine-tasting fundraiser for Rachel. Once word got around Midlothian, there was such an overwhelming wave of support and assistance that it took on a life of its own. Within a few days, we had set up a “board” of eight additional people to help us with Raising Up Rachel. This title came from Rachel’s artwork, which has been printed on T-shirts.”

“The advantage of living in a town like Midlothian is the ‘everyone knows someone’ cliché’ applies. The Ellis County Expo Center was set as the venue for a February 15 event. Food was donated for the event, and other donations for both a “Silent” and “Live” Auction began coming in. We’ll have live music from five local singers and two bands. Beer and wine will be available from a local brewery and Texas wineries,” Snow said.

“This has truly been a demonstration of a community coming together to support Rachel, Olivia and the Richie family. The enthusiasm shown and the willingness to contribute time and energy to help her and the family has been overwhelming,” Snow said. “The board members who helped with the logistics, donations and organization have made “Raising Up Rachel” an event, not just a plan.”

“The accident occurred at the beginning of a New Year, at a time when we should be looking forward to things to come for 2020. The Richies had that hope for a New Year change in an instant. I can’t describe how inspiring it is to see a community, like Midlothian, step up and try to give that hope back to them,” Snow added.

Principal Tipton wrote, “While Rachel was a student at Heritage High School, she excelled in the classroom and on the volleyball court. She is an incredibly sweet young lady and always goes out of her way to make others feel valued and appreciated. Rachel is highly respected by her peers and her teachers and administrators. She received many accolades while at HHS including Homecoming Queen and Ms. HHS. Rachel was also the captain and starting setter for the 2019 Heritage Volleyball Team that had a historic season, earning a Bronze Medal at the UIL 4A State Championship. Our Heritage Family loves the Richie sisters and we are all supporting Rachel in her road to recovery!”

“The photo from homecoming shows Rachel Richie and her boyfriend, Landon Ledbetter. He is currently attending Henderson State where he is studying and playing football,” Principal Tipton said.

“Rachel is very creative, as is evidenced in her discovered personal sketchbook! Her faith is strong and deep. She is humble and gentle in her disposition, but she was a fierce competitor on the volleyball court. Rachel was always an encouraging and supportive teammate and leader for our Jaguars! Everyone loves Rachel Richie! While at Heritage, she was so very friendly towards everyone, including students and adults. Her smile is infectious and she always looks for ways to brighten someone’s day! She is truly a special young lady and she has the whole community of Midlothian praying for her, donating for her treatment costs, and cheering her on every step of the way!,” Mrs. Tipton said.

Raising Up Rachel Board of Directors

The Snows are overseeing the Raising up Rachel event on 2/15 along with the board of volunteers who are all close friends of the Richies. Some work with TABC, while others handle t-shirt sales. The t-shirts feature some of Rachel’s art work. Other directors took charge of electronics, and booking Ellis County Expo Center in Waxahachie for their Feb. 15 fundraiser. The event will also have wineries and a brewery present to sell by the glass. Silent and live auctions are also planned, and six musical groups will perform that night. Local musicians include Josh Burch, Alex Englehart from Waxahachie, and The Southwest City Boys from Dallas. Also the 9th Street Band and Kadie Lynn Band are scheduled to perform.

Tickets for the February 15 fundraiser are priced at $25 for students, $50 for adults, and $75 a couple. VIP tickets, available through Todd Hemphill for $600 a table, are close to selling out. For more information visit Raising Up Rachel on Facebook. 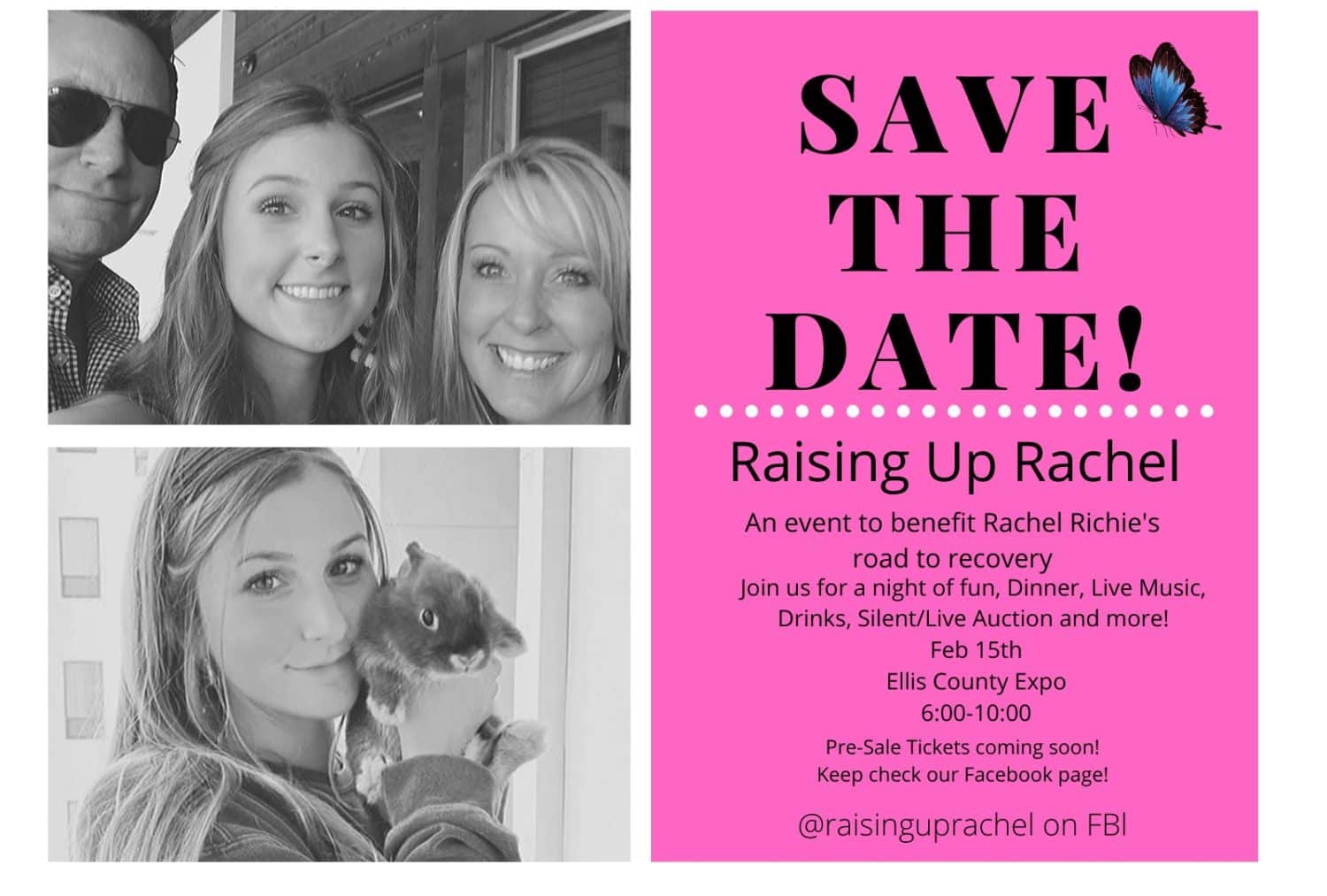