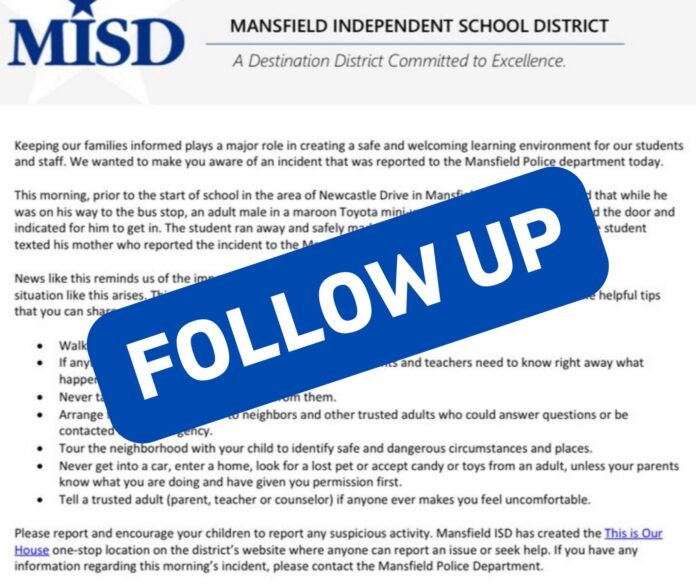 Many parents across the country are on high alert following the abduction and murder of Athena Strand. Sometimes being on edge, means normal events may appear suspicious at first glance. However, Mansfield Police and other law enforcement agencies encourage everyone “if you see something, say something”. It is better to be cautious and proactive when observing activity that appears suspicious.

Today, the Mansfield Police Department released an update on an incident that occurred on December 8, where a minivan was seen stopping in a neighborhood and calling a teenager over to it. After investigating the incident the Police Department determined that was not a threat to the student or the community, the van was an Uber driver looking for their passenger.

Mansfield PD released the following statement: The Mansfield Police Department investigated an incident that occurred on Thursday, December 8, involving a Mansfield ISD student. Officers were originally dispatched the the school in regards to suspicious activity where a mini van stopped in a neighborhood and motioned a teenager over to his vehicle.

MPD takes these incidents seriously, Detectives worked to determine the facts. Detectives determined, with the help of Mansfield ISD PD, that the driver of the maroon van was an Uber driver. He was supposed to pick someone up at the approximate location where the teenager was standing and assumed that he was the person who requested the Uber.

We would like to remind our community that if you see anything suspicious, please contact 911 right away. We are always here to make sure everyone is safe.”