Ask Jeff Buckley about the name of his auto repair shop in Midlothian, and you’ll get a quick answer.

“My Father’s Shop Certified Automotive Repair – the Lord gave me the abilities to work on cars. To honor him,” Buckley said, noting the name was after his Heavenly father.

Buckley has indeed been blessed with success in his business. Now, he’s working to help others find success through his Howdy Midlothian Facebook site. The site shares local businesses with a positive spin, along with community events, etc. – and to never post anything negative.

“So we control the posting,” Buckley stressed.

The site has almost 6,000 members, Buckley said. It works simply, he added.

“We post. We do a video spotlighting the business. Currently we ask that you bring a sample and do a giveaway,” he commented.

It all started a few years ago after Buckley was granted the rare opportunity of doing a commercial for brakes with one of his TV favorites, Mike Rowe of “Dirty Jobs” fame. Not only was the commercial a thrill for him, it was also a blessing for he, his wife Candace, and their business, he said.

A Blessing At The Right Time

Buckley had a heart attack a few months before the opportunity, and though he was recovering well, the business had taken a hit.

“It was a God thing. This guy calls me and said this company wants someone to test these new brake pads and you give your feedback,” Buckley recalled. “He told them, ‘Now, you might not like what he says, but he will tell you a correction would be.’
“All of a sudden I was being supplied with parts, and of course we were still needing to pay our bills, so it was a blessing.”

Next thing he knew, Buckley was receiving a phone call with a special request. He was asked if he minded being flown to Los Angeles to shoot a commercial with a celebrity, but he wasn’t told who. Without knowing who he’d be working with, Buckley initially balked.

“I said you can fly me to California, and if it’s someone I’m not interested in, you can put me back on the plane,” he said. “They said, ‘You’re serious? Oh, it’s Mike Rowe.”

He was chosen from over 400 who had tested the brake pads. Well, eventually. At first he thought he’d lost the gig to a candidate who was also an Eagle Scout – as is Rowe – and Buckley was preparing to head back to the airport, then things changed.

“A guy comes up to the car and says, ‘Jeff, we’ve got to get you to sign all your contracts and papers. We’re shooting right after lunch,” he remembered, then chuckled. “I said I’m hired again?”

Marketing His Business And Helping Others Promote Their Business 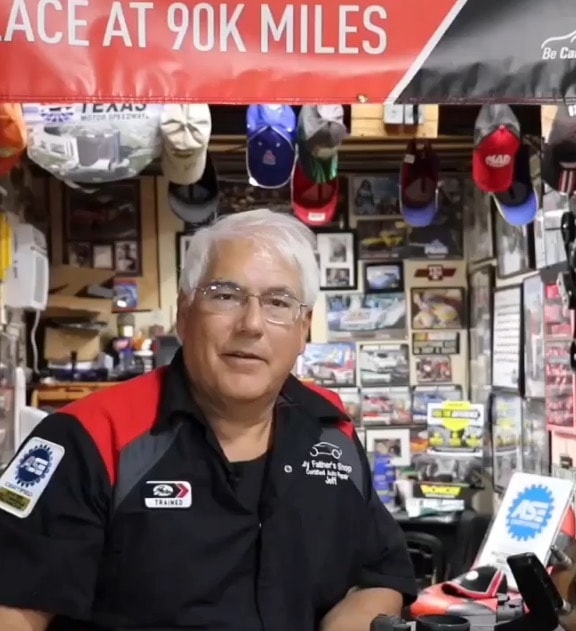 From there, Buckley started reaching out to other companies, simply telling them that if they wanted to send him a product, and it does what they say, he’d do a video and share it with the world.

“I watched what the marketing did and decided I could share other tools and products that I use. I also figured I could help the community by sharing other local small businesses,” he said. “This is how Howdy Midlothian was born. Never been much on social media till then.”

Howdy Midlothian was started four years ago and has twice won the Midlothian Chamber of Commerce Achievement Award. The award can only be won once every three years.

Examples of how Howdy Midlothian has helped include a Hometown Heroes salute. Also, a business couldn’t afford advertising because they had very little left after paying for a new building.

And, of course, COVID-19 has factored in. Whereas Buckley would go shoot a video himself, he now asks businesses to make their own videos and send to him, which he will post if everything is approved.

Born in Japan with his father in the Air Force, Buckley moved around a lot growing up, living in places such as Georgia, New Hampshire, Washington state, and moving to Cedar Hill in the ninth grade. He graduated in 1975.

A Mom & Pop Shop With An Emphasis On Service

After several years of working in management for Sears, he took over his dad and brother’s small Mobil station (his brother wanted to move to a larger one). There, he started learning how to work on vehicles from the technicians.

He then opened a large shop in Cedar Hill doing mechanical work, along with paint and body.

“My uncle taught me painting. I enjoyed fixing and rebuilding vehicles, making them look and run like new,” he said.

In 1994 he, Candace and their four children moved to Midlothian. They built a new shop by the house.

“We were country. We have keep it a mom-and-pop shop to offer the best service we can,” Buckley said.

Now, all four children are adults and doing quite well on their own. All four attended Texas A&M University, he added.

Kathryne was part of the 40 under 40 honors and is in the Midlothian Athletics Hall of Honor. Kimberly was a Young Entrepreneur of the Year for Nu Skin. Jonathan is general manager of Greats Shots in Sioux Falls S.D., and Mitchell is in gas safety systems.

And he’d love to see the same success come to others he’s helped through Howdy Midlothian. “You do what you can to help,” he said, adding, “Because you just should.”