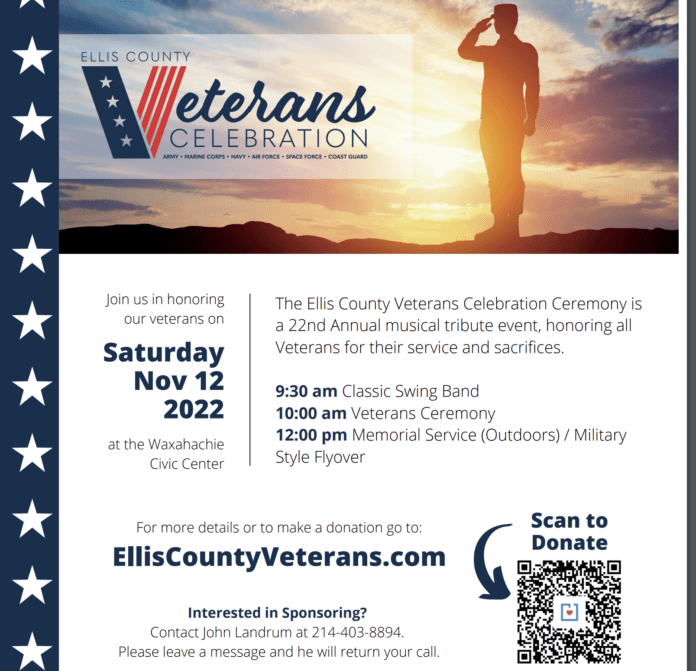 Waxahachie, TX – October 17th, 2022 – On Friday, November 12th, the community is invited to honor our Veterans at the Ellis County Veterans Celebration. Hosted by the Heroes Services Coalition, the 22nd annual event will take place at the Waxahachie Civic Center and include a musical tribute to honor those who have sacrificed so much.

The event is free to the public and will honor Veterans of all military branches including the Army, Marine Corps, Navy, Air Force, Space Force, and Coast Guard. The Classic Swing Band will begin playing at 9:30 AM. The ceremony will begin promptly at 10:00 AM with performances by the Classic Swing Band, the Reveille Sisters, Casey Needham and Brian Johnson.

The ceremony will also include the playing of the Armed Forces Medley and recorded music with a slide show that honors Veterans in our community. (Anyone who wishes to have photos included in the slideshow should submit them to pictures@elliscountyveterans.org by November 1st. Please include what era the picture should be included.)

Following the performances, guests will move outside for a formal wreath-laying ceremony at the Ellis County Veterans Memorial including a three-round volley and the playing of TAPS by Ellis County Commissioner Lane Grayson. The event will conclude at 12 PM with a military-style flyover.

“We really hope family and friends of veterans will bring them to the event,” says event organizer, Robert Bell. “So many of our veterans don’t realize how appreciated they are by our nation until they attend an event like this. It’s very moving for them to understand that their sacrifices mean something to people. Especially for our Vietnam Veterans and our one local surviving WWII Veteran.”

While the event is in its 22nd year, the event organizers are a relatively new organization. Formed in 2021, the Heroes Services Coalition is made up of approximately 18 local community members, many of whom are Veterans.

Previously run by a very grassroots effort, the event was able to sustain itself for more than 20 years. Last year nearly 800 people attended and almost 1000 are expected to attend this year’s ceremony. According to the United States Census Bureau, Ellis County is home to just under 10,000 veterans, more than 5% of the population.

“It’s so important for us to be able to carry on this tradition,” says Bell. “People come from out of the county and even out of the state to attend. Our community has many Veterans and we want this event to continue for years to come.”

Later the same day, the Unity Music Festival will host a Johnny Cash tribute concert at the Waxahachie Fine Arts Center. There will be two performances at 5 PM and 8 PM. Proceeds from all sponsorships of the concert will support the Ellis County Veterans Celebration. Tickets for the concert can be purchased at unitymusicfestival.org.

For those interested in helping, the Heroes Services Coalition is seeking community sponsorships and donations to help underwrite the event. To learn more about how you or your business can support this event, please visit elliscountyveterans.com.