They may not have won a title on the court, thanks to COVID-19, but the folks from Lancaster, Duncanville and Mansfield Timberview know in their hearts who the best boys basketball team in the state is.

This week, the University Interscholastic League honored each boys basketball team across Texas that reached the state tournament but didn’t get to play a game once there. The event started March 12, with only teams in Class 1A and 3A getting in their semifinal games before officials canceled the remainder of the tournament.

Lancaster (36-1) was scheduled to meet Fort Bend Hightower (33-5) in one 5A semifinal, while defending state champion Timberview (29-8) and San Antonio Wagner (35-5) were set for the other.

In Class 6A, defending state champion Duncanville (29-5) was scheduled to meet San Antonio Northside Brandeis (33-3) in the semifinals.

Each team that did not play at state received a trophy from the UIL, while each team member received a gold medal.

“This is just a great way to honor these kids who worked so hard to get there,” Lancaster head coach Ferrin Douglas said. “Some folks are going to argue that no one won because it wasn’t played on the court, and it’s definitely a topic of conversation, but this is great for all of those kids.

“Our school district is recognizing us as state champions, and the great thing about this is they are getting us rings. We were No. 1 (in the state) the whole year, and we were No. 18 in the nation.”

Douglas said the rings will have an engraving noting COVID-19 on them. He also said a parade is being arranged for July.

The Tigers, who were on a 34-game winning streak, were making their seventh state tournament appearance in team history, with state championships in 2015 and 2016. They were runners-up in 1964 and 2010.

“I remember like yesterday how it was when we found out it was being canceled. We had just finishing eating at Luby’s, and one of the kids said, ‘Coach, you’re not going to like this,'” Douglas recalled. “He held his phone up and showed me the cancellation. Then, we were told to keep practicing because they were hoping to bring us back in April. No one knew the seriousness of it, then it turned into what we have right now.”

Following the virtual ceremony, Douglas said the team held an informal banquet, respecting social distancing. Team awards were handed out, highlighted by senior Mike Miles being named MVP, senior Marco Foster and junior Wade Taylor IV sharing Co-Offensive Player of the Year honors, and junior Jalen Williams being named Defensive Player of the Year. Williams and Taylor were also honored for being a member of the National Honor Society, as were juniors Kealon Ferguson and Damon Walker.

Only once in their playoff run to state were the Tigers challenged, slipping past Sulphur Springs in the regional quarterfinals, 44-38. They won their other four playoff games by margins of 64, 41, 28, and 21 points.

“Fortunately, the seniors that graduated were all able to hang a banner and have rings, and these guys who are coming back, they still have an opportunity to do that,” head coach David Peavy said. “That’s our goal – to go ahead and get it this year.”

Incoming senior Juan Reyna said it was disappointing not to bring home back-to-back championships in 2020, but he and his teammates are looking forward to celebrating the successes from their season.

“I think it’s great they’re having the celebration, not only for us but all the other teams to get recognized for how much they accomplished this year, because it’s still a big goal to make it to state.”

The Panthers were ranked No. 1 in the state in Class 6A entering the tournament. En route to state, they had one scare, nipping Grand Prairie in the regional quarterfinals, 66-65. Their other playoff wins were by 12, 13, 15 and 16 points.

Like Duncanville, the Wolves were denied a chance to repeat as champions by coronavirus rather than an on-court opponent. Head coach Duane Gregory’s team was making its third state tournament in four years and fourth since 2009.

On their way to state this season, Timberview provided fans with some thrilling moments, along with relying on a stingy defense. They defeated Denton Braswell in the second round of the playoffs, 40-36; edged crosstown rival Mansfield Legacy, 41-40, in the third round; and escaped Burleson Centennial in the regional final, 64-62.

The Wolves were ranked 16th in the state entering the state tournament. 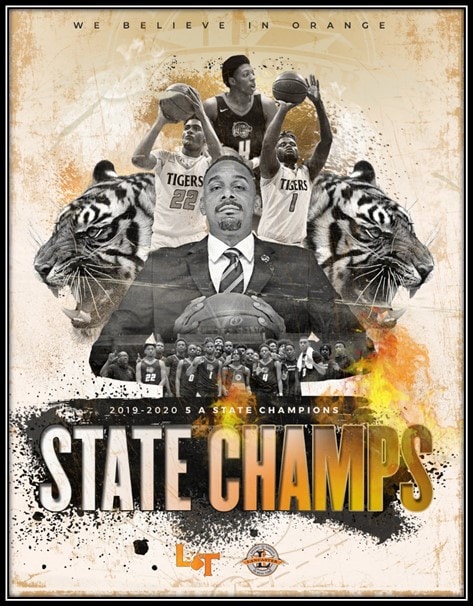