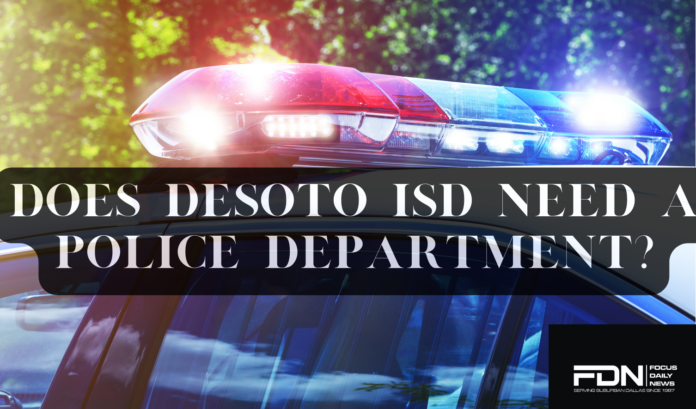 In the case of DeSoto ISD and its neighbors such as Cedar Hill, Red Oak, and Lancaster, one obvious difference is DeSoto’s lack of an ISD Police Department.

This omission stands in direct opposition to most ISDs in the Best Southwest.

DeSoto ISD has three SROs in the district

And, while no one in the DeSoto PD has ever said anything at all regarding DeSoto ISD’s missing PD, all those calls do end up on the city. For example, the fights that occurred several weeks ago at the high school. This results in the city’s Police Department having to do a dance back and forth from the city to ISD as needed.

Tiffanie Blackmon-Jones, Director of Communications, DeSoto Independent School District said when asked questions about a Police Department for the Desoto ISD school district “We do not have a PD, I don’t know why one was not created I would assume budget. Yes, there is plans to look at starting a PD department.”

Blackmon-Jones confirmed it does fall on the DeSoto Police Department to respond to major calls for the ISD.

In Cedar Hill ISD there is an ISD Police Department. The department is helmed by Police Chief James Hawthorne who was previously a Deputy Chief of Police in the City of Arlington. While not in the Best Southwest, but worth mentioning, Arlington ISD does not have a Police Department.

“With a Police Department within the ISD, there are a lot of advantages,” Hawthorne said. “Cases that would normally go into the process within the city would not get the attention that they would get internally. We’re able to give a lot more attention to cases, speeding up the (response) time and the time that it takes to get those over to the District Attorney’s Office. It puts the school district in a position to deal with criminal matters much more swiftly and efficiently.”

Red Oak ISD also has a Police Department. That Police Chief is Phillip Prasifka who has years of experience in both the City of Glenn Heights as a Police Chief and further south – he landed in the Red Oak ISD police chief position several years ago.

“As the Chief of Police for Red Oak ISD, I am truly thankful that the School Board chooses to have an ISD Police Department,” Prasifka said. “I strongly believe that being part of the district gives us an opportunity to build positive relationships with our students and staff on a daily basis. Officers at the campuses are able to build trust with students and staff while helping to provide a safe educational environment.”

Impact Of a District PD

Overall, according to Red Oak ISD, the differences in the ISDs that have a dedicated PD versus the ones that do not are the services provided and that can vary. For example, a few ISD departments have 24/7 staffing, while others have daytime staffing and cover after-school events, such as UIL events or athletic competitions. Some Districts even choose to have coverage and an agreement with municipal or county departments.

“Having an ISD Police Department has multiple benefits, especially if a school district has several city and county jurisdictions. In the case of Red Oak ISD, we currently have campuses in Glenn Heights and Red Oak, and our students come from Red Oak, Glenn Heights, Ovilla, Pecan Hill, Oak Leaf, and unincorporated Ellis County,” Prasifka added. “With having our own Police Department, we have the same guidelines regardless of the actual city location. We also work much closer with campus and district administration as members of the team toward common District goals.”

According to Kimberly Simpson who oversees communication for Lancaster ISD she said the priority is “the safety and security of Lancaster ISD. Beyond that priority, the department also serves as a collective group of individuals who work to be proactive in providing preventative safety training for educators and students. Additionally, the department’s daily activities include service as a teacher of law-related topics such as bullying and drug prevention. Members of the Lancaster ISD police department make an effort to connect with our students and parents and act as mentors to students. Furthermore, the department is dedicated to our district’s mission of helping to ensure student success.”

Back to the DeSoto ISD, Blackmon- Jones speaking on behalf of the Desoto ISD said “Given the nature of your story, there is a limited amount of information that we are able to share on the matter of logistics and strategy regarding security and police in the ISD. Ultimately, these decisions are an impact on our budgetary planning and will be addressed in our budgetary review and planning efforts for the upcoming academic year.”

Blackmon-Jones also noted “Additionally, these considerations will take place across the purview of our current interim superintendent and the incoming superintendent who is not currently active having recently been identified as a lone finalist.”

While the topic of a DeSoto ISD Police Department seems to be a decision that trustees are not ready to make, Blackmon-Jones concluded “In DeSoto ISD, we will always prioritize the safety and security of our students and staff and will work collaboratively with our Board, administration, and other district stakeholders when and where appropriate as we prepare to clarify and update plans and strategies related to safety and security in DeSoto ISD.”