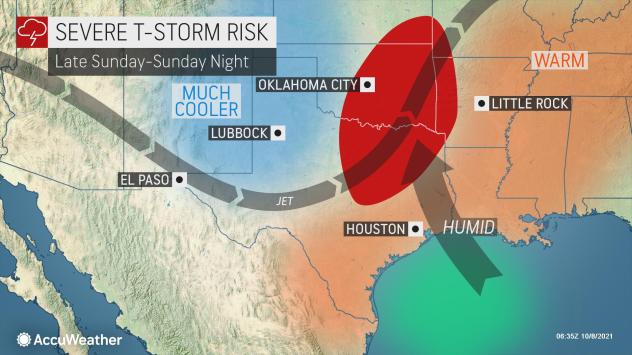 Be Prepared For Severe Weather On Sunday

AccuWeather Global Weather Center – October 8, 2021 – The extended lull in severe weather, which has been accompanied by a warm and tranquil start to the month, will soon come to an end for the south-central United States as the threat of severe storms will be a growing concern in the days ahead.

“A disturbance in the upper levels of the atmosphere will move through the West this weekend and spur the development of a potent storm in the south-central U.S.,” AccuWeather Meteorologist Adam Sadvary explained about the shifting weather pattern.

Many locations across the southern Plains began the month warmer than normal, and AccuWeather forecasters say the unseasonable heat forecast to build over the region late this week will make the region more susceptible to explosive storm activity.

“Cool, dry air from out of the Rockies is expected to clash in the southern Plains with warm, moist air originating from the Gulf,” Sadvary said. “These ingredients will lead to a battleground of severe weather.”

While thunderstorms can begin to rumble to life earlier in the day on Sunday, the most potent storms are expected to develop later Sunday afternoon or even closer to Sunday evening. These storms are forecast to push eastward into the overnight hours and may even remain hazardous into early Monday.

The area with the greatest risk of severe weather late this weekend includes portions of northeastern Texas, eastern Oklahoma, southeastern Kansas and western Arkansas. Multiple major metropolitan areas are within the area of greatest concern.

Forecasters are urging residents of places like Oklahoma City and the Dallas–Fort Worth metroplex as well as travelers along large portions of interstates 30, 35 and 40 to closely monitor the weather for rapidly changing conditions on Sunday.

All facets of severe weather will be possible. Flooding downpours, damaging wind gusts, hail and even isolated tornadoes can accompany the strongest storms on Sunday.

“Anyone in the south-central U.S. should pay close attention to the forecast, as small changes in the forecast area and storm intensity may occur,” Sadvary cautioned. AccuWeather forecasters are monitoring the development of another potent storm with the capability to produce severe weather for portions of the Plains beginning Tuesday.