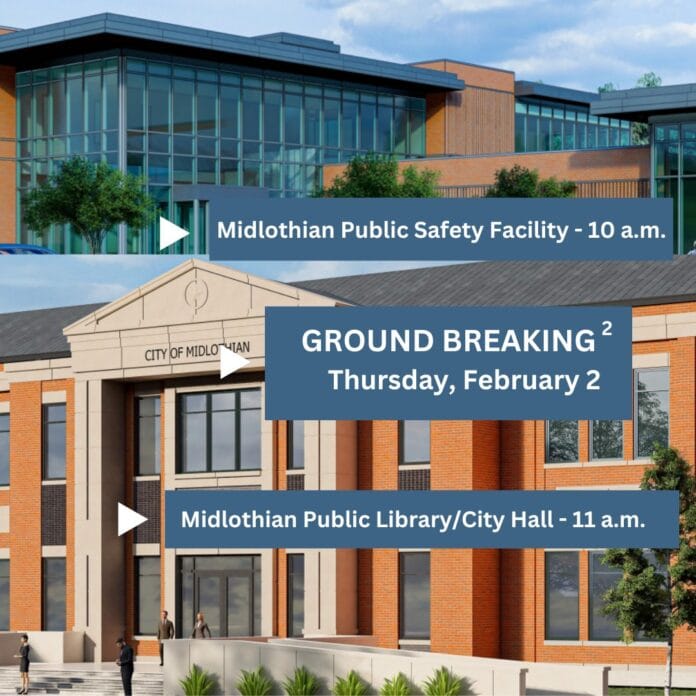 MIDLOTHIAN – Midlothian Mayor Richard Reno and Midlothian City Manager Chris Dick are both in agreement that 2023 will be “a year for execution” for the city.

Reno said “It is all positive. We have done a lot of groundwork prior to 2023 within these last years.”

Now it’s time to see the fruition of the hard work, as bond projects start construction.

Next month will be the groundbreaking for both of these major projects.

“This City Hall is going to last us the next 50 years or so, it is the future,” Reno explained. “A combination City Hall and Library and this is the first time the city will have its own library. We also have the new Public Safety Building. Overall, we anticipate a two-year completion.”

Speaking of the library, both men emphasized the fact the new library won’t be business as usual at 16,000 square-feet.  It will actually be a place where the community can come together for projects including access to workspace, technology and programming.

“It will be downtown so it will be a good catalyst,” Reno added.

According to Reno this is all part of a bigger picture – the Downtown Master Plan, which was approved in 2020.

Dick said too, “We are also doubling the capacity of our water treatment plant and in December the council approved the construction of Walnut Grove so you will see that taking off. In fact, we have in excess of probably $100 million worth of projects just in the four that are kicking off at the same time. Sort of the culmination of the planning we did in 2022 and now we are executing in 2023.”

There is also the city’s population increasing steadily as it has been for some time.

Dick said “We have been averaging about four or five percent increase regularly, we did see a little bit of a slowdown on single family this year with the interest rates going up. I believe we will continue to see growth in the community. I know it is early in January, but we are seeing pickup in that activity so we will get to that trajectory.”

How far can the population increase over the years is anyone’s guess, but Reno said “We have been doubling every 10 years and we have been doing that since 1996 and we are pushing 40 now. Maybe this doubling will be a little bit slower, and we still haven’t topped out if you look at our land uses and theoretically we are pushing 100 so we are still 20 years away – we will still be growing at this rate.”

Of course, Dick adds “You don’t know about redevelopment in the future. Right now, we enjoy a large mix – I think if that changed with future council years from now with the redevelopment of the larger lots that could grow the population exponentially, but I don’t know that is going to happen.”

Midlothian has its fair share of land mass too.

“We do have a large landmass so some of these decisions are way out in the future for example,” Dick explained. “Like the quarries we have and how do you redevelop those someday?”

So, What Do Midlothian Residents Need To Know?

As the city does grow and see forward progress both Reno and Dick said one of the most important things needed by all residents is continued involvement in the critical decision making process.

“We need involvement by the citizens and parallel to what we have talked about we have started a branding process that says who we are and who we aspire to be,” Reno explained. “Behind that we are doing an update on the Comprehensive Plan and the Land Use, and we need input from the citizens. What do the citizens want Midlothian to be?”

Reno pointed out the importance of community involvement by pointing out the success of the new Community Park and how residents have been positive and upbeat about that addition.

“For the most part people out here we like ourselves,” Reno explained. “We really do. We go to the Community Park and the different events and the turnout is a good representation of who we are and it is positive and upbeat.”

And, while all cities have challenges with its growth, Midlothian city council and staff seem to be poised to handle it well.

“How do we ensure quality growth and how do we improve quality of our services within the constraints of our budget,” Dick said. “How do we offer the best quality and services within our budget. That has been a little constrained since the state legislature has capped operational growth at a 3.5% cap, which has made it quite a bit more difficult with the inflationary measures we have seen and it hitting as high as almost nine percent. We also have had supply chain issues so all of those things have made it more difficult, but our city is not alone in that and we want to continue to maintain quality even with those constraints.”

The city does have an excellent bond which has made the challenges that all cities face less taxing. In fact, just under the highest rating of Triple A, which is generally as high as a city can go while growing like Midlothian is doing.

“We have a very conservative fiscal philosophy and approach to things, and we are being challenged now, our reserves and how we manage money and we will be challenged to continue with that,” Reno said. “Some of these decisions made in relation to these projects were not easy to figure out how to go forward and if we will go forward and council says we are going to go forward with these projects, but it is not easy. We will manage it.”

Indeed, the city has a long history of making prudent decisions. The council is in good financial shape with the city continuing to be recognized for its transparency. The City Manager points out this speaks to Midlothian’s financial strength and a drive to ensure that things are being done appropriately from the top down.

So while 2022 was about laying the groundwork as Reno said “We are just now coming into our own – we are very different than we were 25 years ago.” Dick added to that concluding “It is about continuing the vibrancy of the city as we kick off our Comprehensive Plan and the branding project while looking toward the future.”

The City of Midlothian will break ground on Thursday, February 2, for the construction of the new Public Library and City Hall building on North 8th Street and the new Public Safety building at North 8th Street and Highway 67. Ceremonies for the Public Safety facility will take place at 10 a.m. with ceremonies for the Library/City Hall following at 11 a.m. For updates about the 2021 Bond Projects, visit the City of Midlothian’s website, www.midlothian.tx.us, under the “Government” tab.