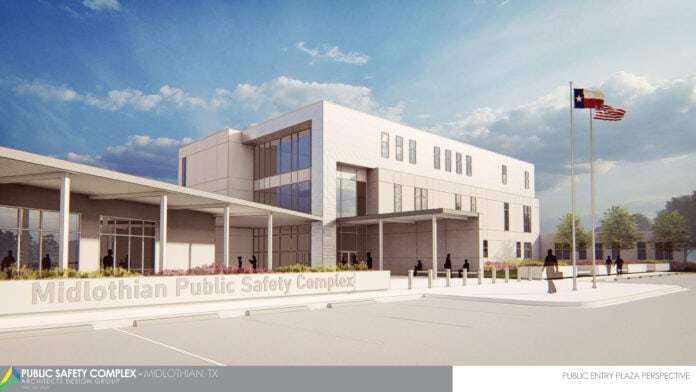 MIDLOTHIAN – With growth there must be change.

That is for certain in the City of Midlothian.

The Midlothian Police Department is happy about the change it is seeing there. Not only did the department hire several new commanders last year, but they are also gearing up for a new police station/Public Safety Facility that will replace the current facility, a former church.

The anticipated groundbreaking for the new Public Safety Facility is November 2022 according to Midlothian Police Chief Carl Smith.

Construction is anticipated to take 18 to 20 months with a move in date roughly in the summer of 2024.

“The facility design isn’t finalized,” Smith said “However, a preliminary special needs study indicate that the facility could be over 64,000 square feet.”

With the new facility Midlothian can improve efficiency in regard to evidence processing, improve security and safety, enjoy improved interview facilities and a dedicated Emergency Operations Center. Plans also include an improved Public Safety Communications Center, a Holding Facility with advanced security and safety functionality, advance property and evidence storage and tracking capability and a Community Interaction Room.

Currently the Midlothian Police Department is housed in what was once Midlothian’s First Baptist Church.  The original structure was constructed in the early 1970’s.  Needless to say, it was not designed to operate as a police facility, and Smith said “it does not offer proper safety and separation for staff, victims, witness, juveniles and individuals accused of criminal acts.”

The facility also does not offer any safety during hazardous weather events and minimal safety precautions against other hazards.

The new Public Safety Facility is designed to support at least 150 full-time police officers. It’s size and design will accommodate growth for the next 25 years.

“The new facility is designed to allow more and safer interaction between officers, court staff, as well as other services offered at the facility,” Smith explained. “The advance EOC and Communications Center will accommodate and grow with advances in technology as well as offer staff operating during hazardous weather events both a safe environment to work, but is designed to operate throughout without service interruptions.”

Facilitating Relationships Between Police & The Community Via Design

“One of my primary goals is that the design will provide a safe, functionally advanced work environment for our staff; additionally, create opportunity for more interaction between police/fire administration and field operations to build strong relationships and allow for a high level of collaboration,” Smith concluded. “The facility’s design is also hoped to create an atmosphere that will reduced perceived barriers between police staff and our community, providing opportunity for positive interactions.”

Funds for the new Public Safety Facility were approved by voters with the passing of Proposition A in 2021 election. The funds earmarked total $46,000,000.

According to information provided to voters, the proposed new Public Safety Facility and Police Headquarters are designed to accommodate our continued fast population growth. It includes: