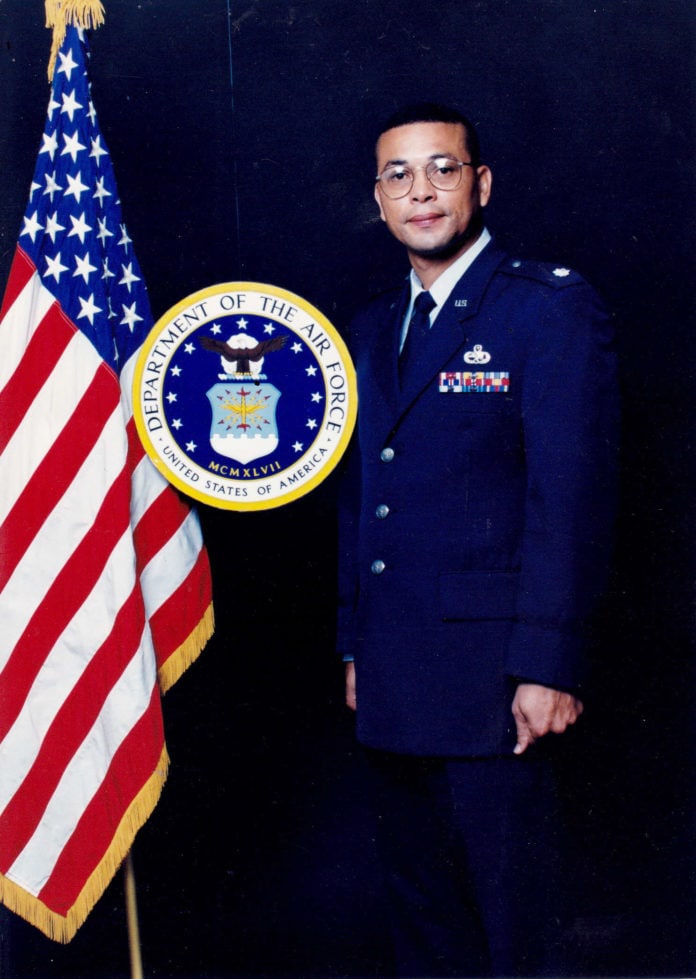 (CEDAR HILL, TX) Symone Humble became the first female group commander of the Cedar Hill High School Air Force JROTC in 2008.
“A big part of that was Lieutenant Colonel Gregory L. Walker encouraging me and showing me that I could do it,” said Humble, a 2009 Cedar Hill High School Graduate. “He was my father figure. He was always there to be supportive and helped shape me into the leader I am today.”

Humble is an administrator at the University of North Texas and is currently working on a Ph. D in Family Studies at Texas Woman’s University.

Walker’s 17-year career at Cedar Hill High School is filled with inspirational stories such as Humble’s, of the impact that he had on scholars over the years.

Walker said he was proud to wear the uniform of the United States Air Force for 41 years, and parts of six different decades. First, as an Airman from 1979-to-2003, and then from 2003 until his official retirement from Cedar Hill ISD this month.

“Most teachers would only have their scholars for a year, or a semester,” Walker said. “I taught my scholars for four years. You would see the light bulb go on, and you could watch the maturation process.”

JROTC at high schools focuses on “developing citizens of character so that they can help their community.” They are in no way military recruiters, although they provide advice for scholars who are interested in the military.

That is quite different than the ROTC programs at colleges where students are actively working on becoming military officers. That’s what Walker did during his final active assignment in the Air Force – from 2000 to 2003 – with the Texas Christian University Air Force ROTC in Fort Worth.

“It’s almost hard to put into words the impact that Col. Walker had on my life,” Walker said. “If somebody was willing to work, Col. Walker would do what he could to put you in the right situation. He wouldn’t forget your goals and wouldn’t let you get off course.”
Walker grew up in Chicago and studied Fine & Applied Arts with a minor in Power Technology at Eastern Illinois University.
He was in Chicago one day when I saw an Air Force television commercial. Little did he know that it would change his life.

Soon thereafter, he served as a Maintenance Control Officer at Chanute Air Force Base in his home state of Illinois.
Future assignments in the 1980s and 1990s brought Walker to England, Spain and Australia. In Australia, Walker was an Exchange Officer with the Royal Australian Air Force (RAAF) Headquarters Logistics Command in Melbourne, Australia.

Upon completion of his assignment in Australia, Walker was stationed mostly in Texas, including his role as the Executive Officer to the San Antonio Air Logistics Commander in 1995-1996 and a Squadron Commander of the 362nd Training Squadron at Sheppard Air Force Base in Wichita Falls (1998 to 2000). It is the Air Force’s largest training force, while 17,000 technical training students annually.

During his time in Cedar Hill, Walker would often take his AFJROTC Group on field trips to museums and cultural centers. They would volunteer to clean the Dallas-Fort Worth Veterans Cemetery. They would also present the colors at sporting events, including games at AT&T Stadium in Arlington.

Jacob Schmitt, a 2015 Cedar Hill High School Graduate, is a Staff Sergeant at Travis Air Force Base in Fairfield, California.

“During each class, Col. Walker would have a lot of visitors, and that would make the class really interesting,” Schmitt said. “When I got to the military, I could tell that I was already ready for it.”

Nathan Nicholas, a 2017 Cedar Hill High School Graduate, will be a junior at Texas A&M University this fall. He is attending U.S. Marines Officer Candidate School this summer in Quantico, Virginia.

“I learned a lot about leadership, and he built me up as a person,” Nicholas said. “He ran the JROTC Program, based upon creating good and honorable citizens.”

As he looks toward his “second retirement”, Walker said he plans to volunteer, as well as focus on hobbies such as gardening and art. He may also take some college courses.

“As I reflect over the past 17 years as a Junior ROTC Instructor, I find myself surrounded by the countless memories of my scholars looking for the guidance of a mentor, and in many instances, a father figure,” Walker said. “I was recently surprised when a number of my former scholars – military officers and enlisted personnel, entrepreneurs, professionals, educators and more) wished me luck in retirement.”