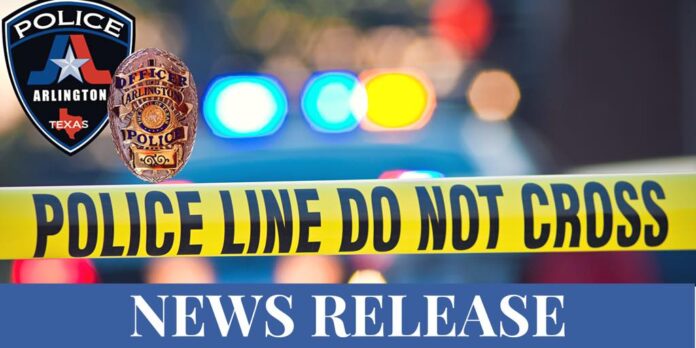 UPDATE – Additional Case May Be Related to Aggravated Robbery/Homicide

The Arlington Police Department determined that a second offense that occurred at 9:12 p.m. in the 900 block of Southeast Parkway may be related. A woman was walking her dog when she was struck by a passing vehicle that was turning onto Rising Meadows Drive from Southeast Parkway. The woman did not get a good look at the vehicle but believed it was traveling at a high rate of speed. Unfortunately the woman’s dog was killed and the woman was transported to the hospital for treatment of injuries sustained in the crash. The woman overheard someone yelling from the car to grab her personal belongings which led detectives to believe the two cases may be connected.

Detectives are asking all residents in the area from S. Collins Street, Southeast Parkway and Rising Meadows Drive to check their consumer video systems to see if they captured the fleeing vehicle. Investigators believe that the suspect fled in an unknown vehicle westbound on Southeast Parkway from S. Collins Street after the initial robbery and stabbing incident. As the car turned northbound onto Rising Meadows, the woman and her dog were ran over and struck.

The initial call that officers responded to on S. Collins Street involved a husband and wife who were out for a neighborhood walk, something they do regularly. As the couple walked southbound on S. Collins Street from Southeast Parkway, the wife reported her husband, identified as 44-year old Islam Duly, was pushed down to the ground. The wife also reported that she was punched and stabbed several times. She reported the suspect then approached her husband and demanded personal property and stabbed him again several times before fleeing on foot.

The suspect description is a skinny build Black male, wearing a black hooded sweatshirt with a facial mask that partially covered the front of his face.

“We are really needing the public’s help on this case to bring the person on persons responsible to justice,” said Interim Police Chief Kevin Kolbye. “Our hearts go out to the victims and families impacted by these acts of violence.” Anyone with information, no matter how insignificant it may seem, is asked to contact Detective Simmons, the department or Tarrant County Crime Stoppers. Tipsters can remain anonymous and may be eligible for a cash reward.

On Wednesday, September 30, 2020 at 9:07 p.m., officers were dispatched to a stabbing in the 6400 block of S. Collins Street. When officers arrived, they located a man and woman with apparent stab wounds. Both injured persons were transported to a local hospital. The man, a 44-year old male, was pronounced deceased at the hospital. The woman is still receiving treatment for serious injuries sustained in the encounter.

A witness driving in the area called police after seeing the woman running from the scene while seriously injured. Investigators believe that an unknown suspect described as a black male wearing a dark hooded sweatshirt and blue jeans attacked the man and woman with a knife after demanding personal property from both of them. Detectives believe that the motive was robbery. The suspect fled on foot towards the Dollar General located at 1200 Southeast Parkway.

Investigators continue to canvass the area looking for clues and possible surveillance footage. Anyone with information is asked to contact Homicide Detective Simmons at 817.459.5735. Tipsters can also remain anonymous by contacting Tarrant County Crime Stoppers at 817.469.TIPS.