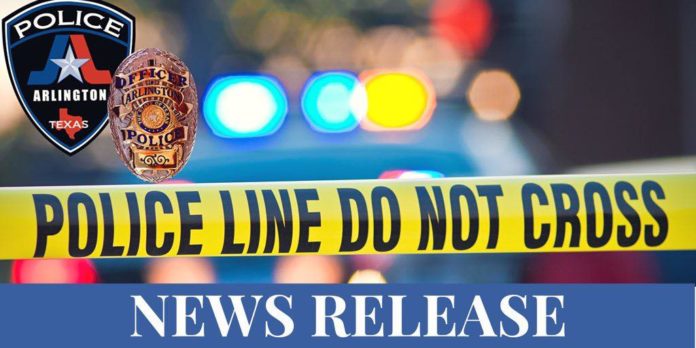 On Monday, July 27, 2020, at 2:47 p.m., the Arlington Police Department responded to a major crash in the 2100 block of Highbank Drive involving a vehicle and a pedestrian. Upon arrival, officers located a seriously injured teenager who had been struck by a suspect vehicle that fled the scene. The victim was transported to a local hospital where he was later pronounced deceased.

Detectives believe that several people in two cars agreed to meet near Bowie High School to engage in a physical fight. The first car that arrived contained approximately five subjects. The second vehicle arrived and began to drive recklessly on the roadway in front of the school. At one point, the suspect vehicle started accelerating towards the vehicle with the five occupants. Investigators believe as the occupants were trying to exit the car and flee to safety believing the car they were seated in might be struck, the suspect car swerved and struck the victim on the roadway.

The suspect vehicle, a passenger car sedan, fled the scene. Investigators are working to identify the suspect. Anyone with information is asked to contact Detective Julia Hall at 817-459-5325. The Tarrant County Medical Examiner’s Office will identify the deceased once next of kin have been notified. The department is working with the Arlington ISD since the victim attended a local high school in the city.